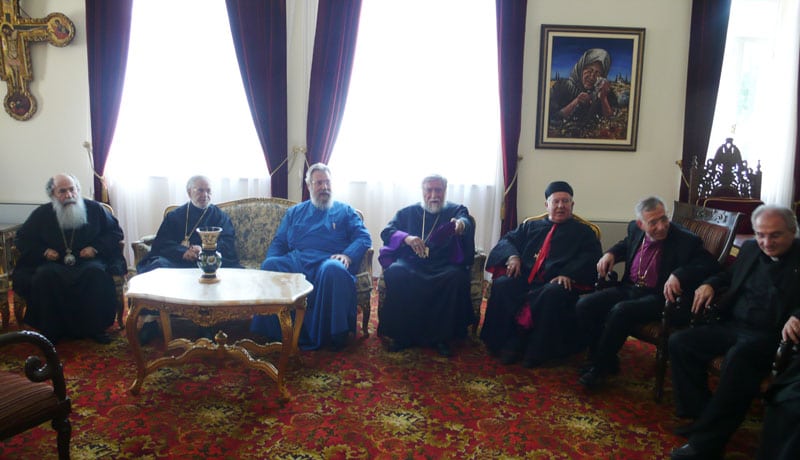 MEETING OF THE ORTHODOX PATRIARCHS OF THE MIDDLE EAST AND OF THE ARCHBISHOP OF CYPRUS IN NICOSIA.

Upon the arrival of the dignitaries at Larnaca airport on the morning of Wednesday, the 2nd / 15th of September 2010, they were received by His Beatitude Archbishop of Cyprus Chrysostomos.  His Beatitude Patriarch of Alexandria Theodoros arrived during the evening on this day.

The aforementioned dignitaries met in their capacity as Representatives of the Orthodox Churches of the Middle East in the Council of Churches of the Middle East (CCME) as it is known. In this Council, four so called “families” take part, that is the families of the Orthodox, the Pre-Chalkedonian, the Latins and the Protestants.  His Beatitude Patriarch of Jerusalem Theophilos III is the President of the family of the Orthodox which includes the Patriarchates of Alexandria, of Antioch, and Jerusalem and also the Archdiocese of Cyprus for the current four year term.

Upon their arrival at Larnaca airport, the Dignitaries gave a brief interview. Firstly the Archbishop of Cyprus expressed His  joy at receiving the Dignitaries in order to discuss subjects that will assist and that  will be of benefit to the Christians of the Churches of the Middle East. Then the Patriarch of Antioch stated that he is particularly delighted about His meeting with the Patriarch of Jerusalem Theophilos III for the first time and, furthermore, that this meeting will contribute towards the solution of problems that beset the Christians of the Middle East. Finally, His Beatitude Patriarch of Jerusalem Theophilos III explained that the purpose of this meeting is to tackle, primarily, the problem of the crisis which currently assails the CCME and also the status of the Christians in the Middle East.

Concerning the first topic, they held a meeting on the morning of Wednesday, the 2nd / 15th of September 2010, with the representatives of the Orthodox family of the CCME at the Hilton Park Hotel, where they were also lodged by the kind and polite gesture of the Holy Archdiocese of Cyprus.

At noon on this day, His Beatitude Archbishop of Cyprus Chrysostomos hosted dinner for all of the representatives of the CCME that came to the Archdiocese.

During the course of the meal His Beatitude Patriarch of Jerusalem Theophilos III thanked the Archbishop of Cyprus for His kind hospitality  and for the support offered by the Archdiocese of Cyprus to the CCME and congratulated Him on the recent ratification by the Government of Cyprus of the Charter of the Church of Cyprus.

After an intensive discussion they decided that the efforts for the redress, reestablishment and strengthening of the CCME as a union of expression of justice and peace in the Middle East and of support of the status of the Christians should be continued. Furthermore the mission and deed should be continued with the Coptic Church, which is expected to be reconnected with the CCME. The General Assembly of the Council will be convened in Cyprus around the end of February 2011. These decisions by the four Presidents were relegated, according to the bylaws of the CCME, to its Executive Committee, which will convene on the 24th of September of the current year in Damascus.

His Beatitude Archbishop of Cyprus Chrysostomos hosted a banquet dinner for all the dignitaries and their escorts at their lodging hotel.

On the morning of Thursday, the 3rd / 16th of September, the Heads of the three Primal Patriarchates visited the Archdiocese of Cyprus where His Beatitude Archbishop of Cyprus Chrysostomos cordially welcomed them.

There, between the Heads of the three Patriarchates and their representatives, as well as His Eminence Nikolaos Bishop of Amathus,  representative of the Church of Cyprus to the European Union, and the Reverend Father Ioannis, representative in the CCME, an intensive discussion took place regarding the causes of the financial and administrative crisis of the Council of Churches of the Middle East (CCME) and the measures which are warranted in order to overcome this crisis.  As one means of assistance, it was proposed to accept the offer from the Archdiocese of (the Church of) Cyprus of the premises to house the offices of the CCME in Cyprus and to accommodate their Secretarial personnel together with the offer of hospitality for all meetings of Council representatives whenever and as often as they take place in Cyprus.  Likewise, the insistence on the convening of the General Assembly as agreed and the determination of the Orthodox Churches to continue to take an active part in and to confront the problems of the Churches which  they represent in unanimity, and to contribute to their spiritual progress and  the amelioration of their terms of life, was highlighted and emphasized.

During this meeting the three Primuses paid particular attention  to the status of Christians in Israel, Palestine, the Holy Land and, generally in the Middle East, as well as to Christians’ problems, the expatriations, the emigration, the education, their coexistence and their symbiosis with adherents of other religions.  It was decided to bring into effect the cooperation between the Churches of the Orthodox family, but also the Churches of the other three families of CCME, for the purpose of helping and assisting the Christians whom the various Churches represent.

This help will be delivered through the improvement of the level of the schools already in existence via the establishment of new ones and the granting of scholarships to young Christians either for studies at Universities in the Holy Land or at institutions abroad  on the condition that, upon  completion of their studies, they will return for employment to their birth place. Furthermore, Christians will be offered assistance through their Churches with the creation of jobs and via the establishment of works projects with funding from the European Union and other organizations.

At the close of this meeting, the Dignitaries gave an interview to the Cypriot Media, the communiqué is as follows:

The Primuses of the three Primal Patriarchates of Alexandria, Antioch and Jerusalem Their Beatitudes Patriarchs Theodoros, Ignatios and Theophilos III met by themselves in Cyprus following the initiative and the invitation of His Beatitude Archbishop of Cyprus Chrysostomos. They discussed ways and concrete measures in order to resolve the problems and overcome the crisis of the Council of Churches of the Middle East, so that the Council will be able to continue to deservedly fulfill the purpose of its establishment, that is to support the Christians in Jerusalem, Palestine and the wider Middle East and, simultaneously, to continuously strive for peaceful coexistence and symbiosis of Christians amongst the people of the region and for the prevalence of a just and peaceful solution in the Middle East,  Jerusalem,  the Holy Land and on the martyred island of Cyprus.

The Heads held a private meeting the central subject of which was the status of Christians in the Middle East.

During the afternoon of the last day of the visit in Cyprus, His Beatitude Patriarch of Jerusalem Theophilos III along with His Beatitude Archbishop of Cyprus Chrysostomos and His escorts went from the Archdiocese of Cyprus to the area nearby where the Hexarchy of the Patriarchate of Jerusalem was situated and where it will be reestablished and will be erected.  The current representative of the Patriarchate at the Exarchate is His Eminence Timotheos Metropolitan of Vostra.

After this visit His Beatitude Theophilos III Patriarch of Jerusalem along with His escorts returned via Cyprus Airways to Tel–Aviv airport and from there to the Patriarchate  of  Jerusalem.

VISIT OF A CHAMPION OF ISRAEL AT THE PATRIARCHATE

VISIT OF THE ARCHAEOLOGIST DR. DIETER VIEWEGER FROM GERMANY AT THE PATRIARCHATE