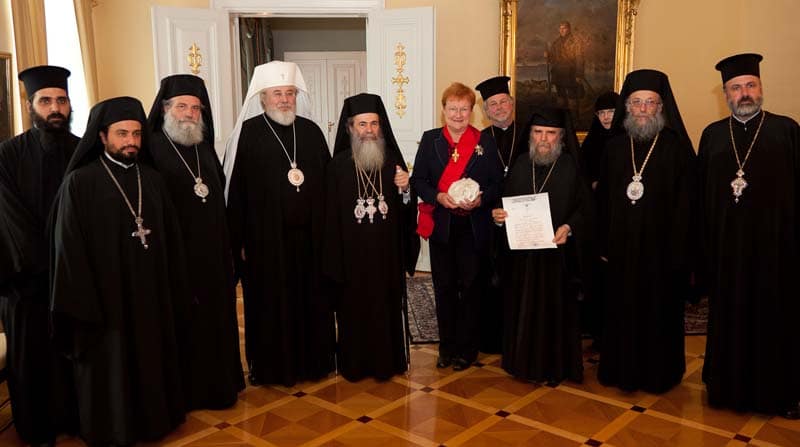 H.B. PATRIARCH THEOPHILOS ADDRESS AT THE MEETING WITH THE HONORABLE TARJA HALONEN, PRESIDENT OF THE REPUBLIC OF FINLAND.

It is an honour for us to be received by you today, Madame President, and it has been a great joy for us to be in your beloved country on this, the first fraternal visitation of the Patriarchate of Jerusalem to the Finnish Orthodox Church. We have visited the Church’s many holy sites and historic churches, and we have been heartened by the devotion of the people and the active ministry of the Orthodox Church.

Christianity first came to Finland almost 1000 years ago, and your Christian history has helped to shape the unique character of the Finnish people. Indeed it was the notable Lutheran pastor of the New Testament in 1548, became known as “the father of the written Finnish language”.

Yet Finland is unique among the nations of the world in recognizing not one, but two established State Churches, the Evangelical Lutheran Church of Finland and the Finnish Orthodox Church. This is a public recognition of the remarkable history of this nation and of two great Christian traditions that have shaped the life of the people.

In the course of the history of the last century, Finland has played a crucial role in the struggle of the nations, and in the survival of Orthodoxy in this region. Indeed the Finnish Orthodox Church has known within the intimacy of its own life something of the pain and difficulty of these wider international struggles. The monastery of New Valamo, which we visited last week, is but one shining testimony not simply to the determination of Orthodox believers, but also to the strength of the spirit of the Finnish people in the face of immense challenges.

In recognition, therefore, of the Orthodox history of your country, and of the role of the Finnish Orthodox Church as a state Church, we desire to bestow upon you the Order of the Holy Sepulchre.

We pray that the warm personal ties that now bind the Finnish Orthodox Church with the Patriarchate of Jerusalem may continue to deepen. We look forward to the possibility of welcoming you, dear Madame President, to the Holy City of Jerusalem in due course, and we commit ourselves to the pastoral care of all Finnish people who come to the Holy Land on pilgrimage.

May God bless you, the government of this noble Republic, the Finnish Orthodox Church, and all the people of your nation, who are also dear to us.

Than you once again for your gracious welcome and reception.