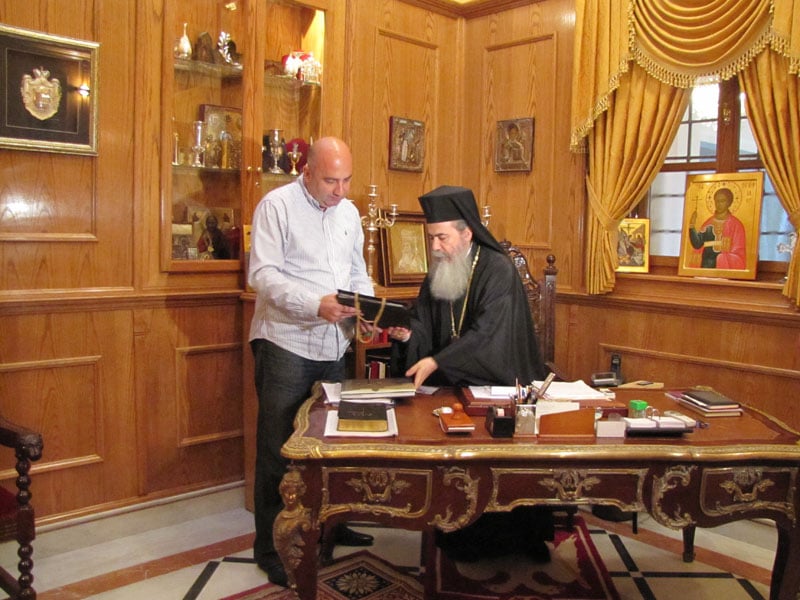 THE GEORGIAN MINISTER MR. RAMAZ NIKOLAISHVILI AT THE PATRIARCHATE.

On the evening of the feast of the Transfiguration, 6th / 19th of August 2010 ,and upon his return from the celebration of the feast on Mount Tabor,  His Beatitude Patriarch of Jerusalem Theophilos III received the Minister of Regional Development & Infrastructure of Georgia His Excellency Mr. Ramaz Nikolaishvili at the Patriarchate along with the members of his escort and members of the Israeli Police of Jerusalem.

The Minister Explained to His Beatitude that since he had visited Him two years ago the relations between the Church and the State of Georgia have been advanced to the best degree possible.

In response His Beatitude said that the Patriarchate has always maintained close ties with Georgia as well as properties, Churches and Glebes in that country;  furthermore, nowadays, the Patriarchate finds itself in the pleasant position to regularly receive  Georgian pious worshippers that venerate the Holy Shrines.

The Minister thanked His Beatitude for the reception and presented  Him with gifts, souvenirs from the cultural treasures of Georgia which were retrieved from the storm of atheism.  His Beatitude presented  the Minister and his escorts with a descriptive book about the illustrated manuscripts of the Patriarchate’s Central Library, medals of the Patriarchate representing the 2000 years of Christianity and pectoral gold crosses.