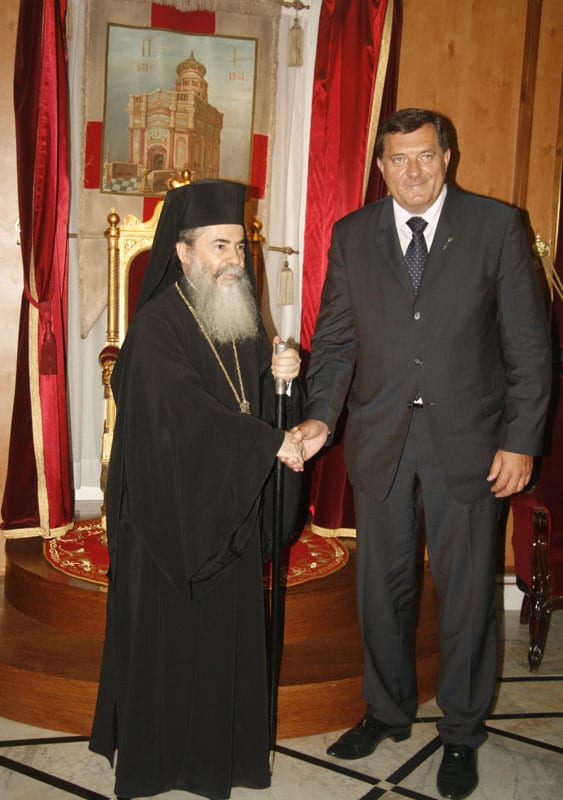 THE PRIME MINISTER OF REPUBLIKA SRPSKA MR. MILORAD DODIK AT THE PATRIARCHATE.

On Monday the 3d / 16th of August 2010 the Prime Minister of Republika Srpska His Excellency Mr. Milorad Dodik, accompanied by the Diplomatic Representative of the Republic to the State of Israel  and by representatives of the Israeli Ministry of Foreign Affairs, was received by His Beatitude Patriarch of Jerusalem Theophilos III.

Within the framework of this visit, the Prime Minister addressed His Beatitude as follows: «I am pleased that I am visiting, for the second time, the Holy Places.  I convey to You the respects of the Bishops, the priests and of the devout people of Republika Srpska.  I reminisce about my visit as the representative of Srpska for the celebration of the 2000 years of Christianity by the Patriarchate of Jerusalem, when I was also decorated by Your Predecessor the late Patriarch of Jerusalem Diodoros.

The majority of the people of Srpska are Orthodox Christians who foster feelings of respect and high esteemfor the Patriarch of Jerusalem.  Republika Srpska is an autonomous state within the state of Serbia».

Welcoming the Prime Minister, His Beatitudereplied: «we follow the effected changes as well as the ones taking place in the Republic of Serbia (Republika Srbija) and Republika Srpska.  We wish that religion, namely the Christian Orthodox Religion, will play its unifying role for the Serbian people.  We have full confidence only in God.  We rest our hopes in God and the Orthodox Church.  We, the Orthodox, believe and contemplate the Resurrection through the prism of the Holy Cross».

The Prime Minister presented  His Beatitude with a painting depicting Banja Luka, the capital of Srpska.

His Beatitude offered  the Prime Minister a commemorative medal representing the 2000 years of Christianity, a book about the illustrated manuscripts of the Central Library of the Patriarchate and an icon of the of the Holy Sepulchre.

After  visiting  the Patriarchate, His Excellency the Prime Minister, along with his entourage, visited, in order to venerate, the Church of Resurrection.