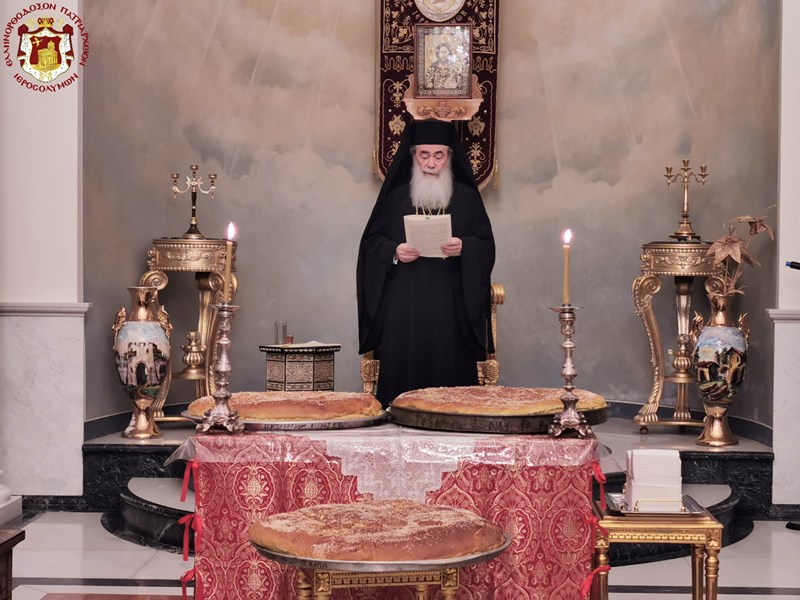 On the evening of Friday, December 31, 2022/January 13, 2023, New Year’s Eve, the cutting of the New Year Cake (Vasilopita) took place in the hall of the Patriarchate, in the presence of the Hagiotaphite Fathers, the Consul General of Greece in Jerusalem, Mr Evangelos Vlioras, the Greek Community of Jerusalem, the Trustees of the Cathedral of Saint James the Brother of God, the members of our Arabic-speaking flock and pilgrims.

On this occasion, H.H.B. our Father and Patriarch of Jerusalem Theophilos delivered the following address:

“And God said, let there be lights in the firmament of heaven to divide the day from the night? and let them be for signs, and for seasons, and for days, and years” (Genesis 1:14) the Bible reads.

Our holy Church celebrates a double feast today the feast of the circumcision of our Lord and God and Saviour Jesus Christ and of the memory of our holy Father Basil the Great, and brought us all together in this holy place of our Venerable Patriarchate, that we may glorify and give thanks to the holy Triune God for the entrance of the New Year. Moreover, so that we can customarily perform the cutting of Vasilopitta, made in honour of Saint Basil.

God the Father set times and seasons in his own power (cf. Acts 1:7) says the Lord. Interpreting these words of the Lord, Saint Gregory of Nyssa says: “The Father in his own authority established the times, and from the times and everything born in the time we understand that the Father has authority over all these”. And Athanasios the Great points out saying: “about the end of all times [Christ] as the Word knows, as man is ignorant; for the man himself is ignorant of even these things”. According to Cyril of Alexandria: “one should not be curious about the very secret things and hidden in God and through them, the Lord taught”.

Indeed, it is impossible for the human mind to determine the meaning of time and its change without referring to its creator, God the Father, as Saint Paul teaches saying: “For by him were all things created, that are in heaven, and that are in earth, visible and invisible… all things were created by him, and for him” (Col. 1:16). Therefore, Basil the Great says: “and when now the time has come for the world to be introduced into the creatures … then the flow of time was created as a basis, inherent with the world … a flow that constantly rushes and runs sideways towards it and nowhere ends its path. Isn’t Time something whose past has disappeared, whose future has not yet appeared, and whose present, before it is fully perceived, escapes immediately from the hands of the senses?”

The exit of time, i.e. its appearance after the world but also its change, indicates the course on the one hand of man’s history in the world, on the other hand, of his rebirth in the Holy Spirit, of his hagiographical so-called history. “The Spirit of the Lord God is upon me; because the Lord hath anointed me to preach good tidings unto the meek; he hath sent me to bind up the broken-hearted…To proclaim the acceptable year of the Lord”(Is. 61,1-2/Lk. 4,18-19) says the Lord.

The Year of the Lord is not other than that, through which Jesus Christ, “Not by works of righteousness which we have done, but according to his mercy he saved us, by the washing of regeneration, and renewing of the Holy Ghost? Which he shed on us abundantly through Jesus Christ our Saviour” (Tit. 3,5-6). We also hear St. Cyril of Alexandria saying: “accepted is the year which, however, we have entered into, washing away sin through holy baptism and becoming communicants with its divine nature, being born into communion through the sharing of the Holy Spirit… as also the all-wise Paul preached “behold, now is the accepted time? behold, now is the day of salvation” (2 Cor. 6,2).

The Church, therefore, the divine-human body of Christ, which is not of this world (Jn. 8:23), celebrates the fact of the change of the year not in a worldly way, but in a Christ-like way. And this is because Christ is the Lord of Time distinguished into the present, past and future on the one hand, and numbered in years on the other. “I am Alpha and Omega, the beginning and the ending, says the Lord, which is, and which was, and which is to come, the Almighty” (Rev. John 1:8) according to the testimony of Saint John the Theologian.

In other words, the human intellect’s understanding of the outgoing old and the new incoming Year becomes possible only in the Incarnation of God the Word of Christ, because, as Saint Paul preaches, “Therefore if any man be in Christ, he is a new creature: old things are passed away? behold, all things are become new” (2 Cor. 5,17). We become partakers of this newness in Christ in the liturgical and eucharistic act of the Church, as Time becomes season.

Christ has granted us the time that is born in his Church, so that we may cleanse soul and body from all corruption and become beloved to God, as the apostle Barnabas orders in his letter: “let us therefore completely depart from all works of iniquity, lest the works of iniquity overtake us; and let us hate the error of the present time, that in the future we may love”.

These divinely inspired words of the apostle Barnabas call all those who love, according to Basil the Great, “the longed-for beauty, the source of life, the mental light but also the unattainable wisdom”, during this time of the change of the year and the dawning apostasy and iniquity, so that we may reflect on our transgressions, for which our Lord Jesus was delivered and raised for our righteousness (cf. Rom. 4:25). “Let no man deceive you: he that does righteousness is righteous, even as he is righteous” (1 John 3:7) orders St. John the Evangelist.

Saluting the dawn of the new year in the Incarnate in Christ from the pure blood of the most blessed Theotokos and Ever-Virgin Mary, we beseech the Great Hierarch of Cappadocia, Saint Basil, the one who has adorned the things of men, that he may also intercede to the circumcised Lord God and our Saviour Jesus Christ for our souls, for the peace of the universe, especially for our tested region of the Middle East and for the cessation of schisms and the restoration of the broken unity of the One Holy Catholic and Apostolic Orthodox Church.

And after the hymnographer, we say: “God of Gods and Lord, you who are three-present nature, unapproachable, and creator of all, Almighty, we all fall to you, and we entreat you; bless this present year, as a Good one, keep in peace, Your Church, our Venerable Hagiotaphite Brotherhood, our pious Christian flock, the holy city of Jerusalem and the pious nation of the Roman Orthodox. Amen.

Happy, blessed and peaceful New Year 2023, and many happy returns!”

Then, as the troparia of the Circumcision of the Lord and of Saint Basil were chanted, His Beatitude cut the cake and distributed its pieces to the pilgrims, praying: “Happy and prosperous New Year 2023” and the students sang the New Year carols in the Hall and later at the cells of the Hagiotaphite Fathers.