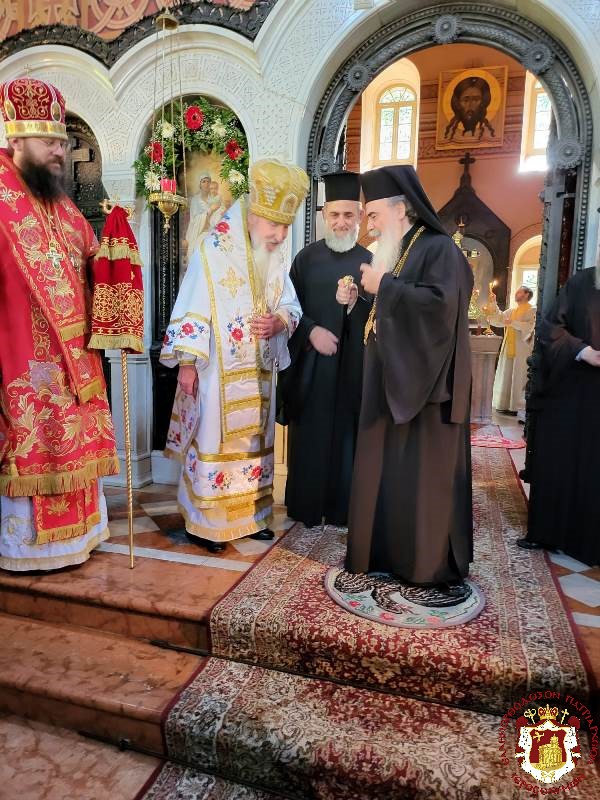 On this occasion, the Patriarchate was represented by H.H.B., our Father and Patriarch of Jerusalem Theophilos, accompanied by His Eminence Archbishop Aristarchos of Constantina and Archdeacon Mark through his address in English:

Beloved Members of this Sisterhood,

Sisters and Brothers in Christ,

We greet you on this happy feast of Saint Mary Magdalene, your patron, and we recall the words of Saint John’s Gospel, where we read:

“Mary Magdalene went and announced to the disciples, ‘I have seen the Lord’, and she told them that he had said these things to her”.

So, by God’s providence, Saint Mary Magdalene, the Holy Myrrh-bearer, being the first to see the risen Christ, became an evangelist of the passion and condescension of our Lord and so is celebrated as Equal-to-the-Apostles.

Saint Mary Magdalene obeyed the commandments of our Lord, and so it was granted to her, along with the Mother of God, to be the first witness of the resurrection. Saint Mary Magdalene was given the privilege to behold the risen Lord with her physical eyes; we, in turn, experience the risen Lord with the eyes of the heart and follow her example. We, to whom the Diakonia of the Holy Places has been entrusted, especially this place dedicated to Saint Mary Magdalene and so is where we venerate her, are called to be a witness of the Light of the resurrection in our own way. So, we sing with the hymnographer:

With others standing at the Saviour’s Cross

weeping and suffering with the Mother of God,

what is this strange wonder?

He chooses to suffer who upholds the whole creation.

The celebration of Saint Mary Magdalene has brought us together today as a sign of our oneness and unity in Christ. This unity is precious, and we who are called to be the servants and guardians of the Holy Places have a special responsibility to preserve and deepen the unity of the Orthodox Church. Just as Saint Mary Magdalene brought the news of the resurrection to the disciples and so strengthened them in unity, so must we, to whom so much has been given, be those who witness the resurrection and build up the Church’s unity in love.

The One who upholds the whole creation has called us out of darkness into his marvellous light (1 Peter 2:9), and we pray to Almighty God, dear Father Roman and Dear Mother Elizabeth, for God’s blessing upon this place and this community, that you may be a dwelling place of the martyria of our Orthodox faith and a beacon of hot to a world that is hurting and in despair.

On this day, the feast of the Holy Virgin Martyr Markella of Chiopolis was also celebrated, and a Divine Liturgy was held in her Holy Chapel, located in the Holy Monastery of Saint Spyridon in the Old City of Jerusalem by the Master of Ceremonies, Archimandrite Bartholomew after the care of Archimandrite Sergios.