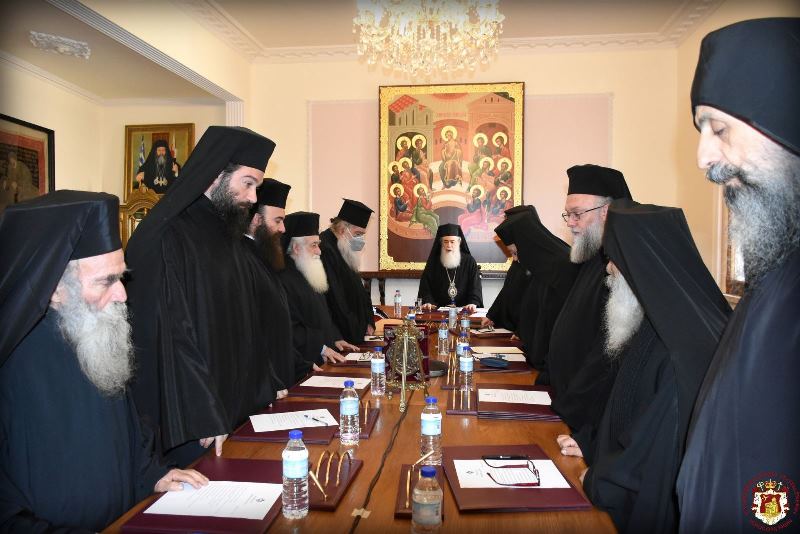 Several issues related to ecclesiastical and pastoral administrative affairs of the holy places were among the matters discussed. The final decisions made by the Synod were as follows:

1. His Eminence Archbishop Philomenos of Pella is appointed a pastoral supervisor and spiritual guide for the churches of the Patriarchate and the parishes in the cities of Birzeit, Jifna, Ein-Arik, Aboud and its suburbs, within the Palestinian Authority.

2. Elder Dragoman Archimandrite Matheos, who also serves as the director of the Patriarchal school of Mount Zion, is appointed as the Hegoumen of the Holy Cross Monastery, and is appointed to carry out the mission of reestablishing the Theological School of the Holy Cross Monastery, in cooperation with the Orthodox Theology faculties in Greece, alongside a Committee appointed by the Holy Synod, which is composed of His Eminence Archbishop Aristarchos of Constantina, Archbishop Isidoros of Hierapolis, and Hierodeacon Simeon.

3. Approving the request of His Eminence Archbishop Christophoros of Kyriakoupolis, to ordain new deacons and priests in the Diocese of Jordan, as follow:

4. Appointing Archimandrite Venedictos Kayyal as the Hegoumen of the town of Zababdeh and its suburbs.

5. Appointing Archimandrite Porphyrios as Hegoumen of the Monastery of St. George (Al-Khader) in Beit Jala.

6. Appointing Deacon Dositheos at the Secretariat Office, in the Department of Information Technology.

7. Appointing Fr. Elias Khoury as an associate priest with Fr. George for the town of Rameh, near Acre.

The Holy and Sacred Synod of the Patriarchate of Jerusalem met in Jerusalem, on Thursday,...