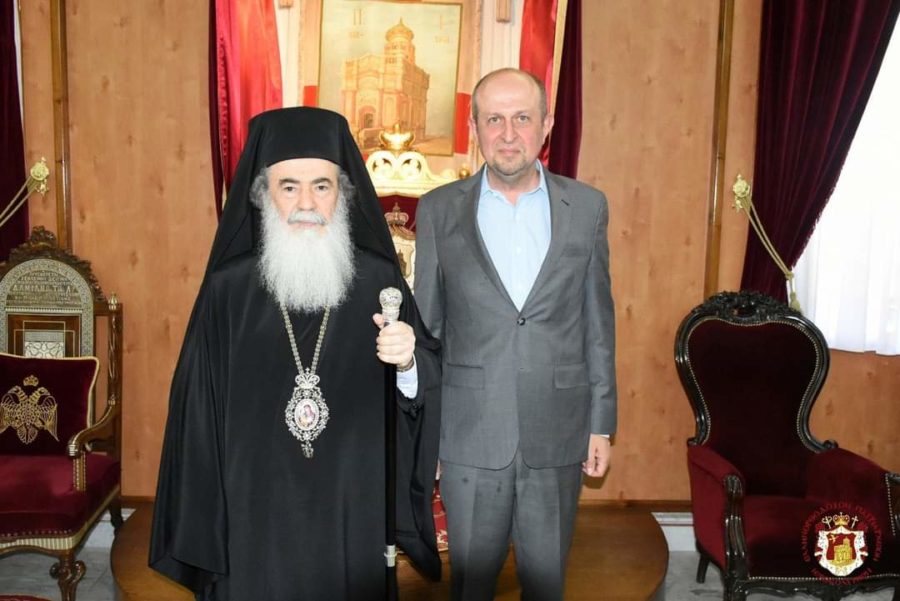 After Mr. Amr conveyed the US President Joe Biden’s concern with the affairs and challenges facing Churches of the Holy Land, His Beatitude Patriarch Theophilos III stressed that Christians in Jerusalem are under strain due to systematic attempts by Israeli radicals to rid the Holy City of the Christian presence.

The Patriarch added that Churches of the Holy Land are unified in their position to preserve the authentic Christian heritage and presence in Jerusalem despite all challenges put forward by radical Israeli organizations.

His Beatitude later spoke about how the radical Ateret Cohanim organization’s dubious legal battle to take over the Imperial Hotel at Jaffa Gate has potential danger on the entrance to the Christian Quarter and the Status Quo of the city, as it is the main entrance for the Christian pilgrims to the Church of the Holy Sepulchre and other churches headquarters. With the court’s ruling in favour of Ateret Cohanim this week, His Beatitude added that all legal procedures are exhausted. Despite this unfair ruling the Churches remain steadfast in their commitment to support the current tenants of the properties and a vision for a multi-religious and multi-ethnic Jerusalem, despite the actions of Ateret Cohanim. His Beatitude added that the Christian properties at the New Gate are in danger as well, as the local authorities are pushing forward significant changes to the area.

The meeting highlighted how the plans of the Israeli Nature and Park Authority, who are acting in accordance with the Israeli radical group Elad, attempted to expand the Jerusalem Walls National Park into the Mount of Olives. Patriarch Theophilos explained how this plan would have entirely or partially encircled 20 Christian sites without consultation with the Churches, essentially confiscating and nationalizing Christian Holy Sites. His Beatitude stressed that although the plan was withdrawn, but is expected to be proposed again later in the year, causing Churches further distress.

Furthermore, the Patriarch of Jerusalem spoke about the restrictions implemented on freedom of Christian worshippers, paired with a lack of police enforcement in response to religiously motivated attacks against Christians, that have created an atmosphere of fear and intimidation to those who wish to practice their faith freely in Jerusalem. His Beatitude said that this year, on Saturday of the Holy Light, Jerusalem’s police restricted pilgrims and local Christians alike from entering the Christian Quarter, blocking access to the Church of the Holy Sepulchre. More often than not, the police used uncalled-for violence to prevent worshippers from making their pilgrimage to the site.

His Beatitude added that attacks against Christians and clergymen, at the hands of radical Israelis, have been increasing in Jerusalem, as well as vandalism against church properties, and verbal and physical abuse against priests are increasingly commonplace, particularly on Saturday nights. His Beatitude explained that an increasing aggressivity from radical Israelis is most prominent on Mount Zion, where Dormition Abbey and the Orthodox Garden are often targeted. The past Monday, June 6th, a church groundskeeper was threatened to have his eyes burned out with cigarettes and was told that he would be found and killed for attempting to secure the Christian property. Those said that Police rarely investigate these incidents, so much so that many clergy do not report crimes due to law enforcement turning a blind eye so frequently.

On the otherhand, Mr. Amr stated that the U.S. State Department is concerned with Christian heritage and presence in the Holy Land with special concern for the issue of Christian property at Jaffa Gate in Jerusalem. His Excellency also mentioned President Biden’s interest in meeting with Heads of Churches, to listen to their concerns on his upcoming visit to the region.