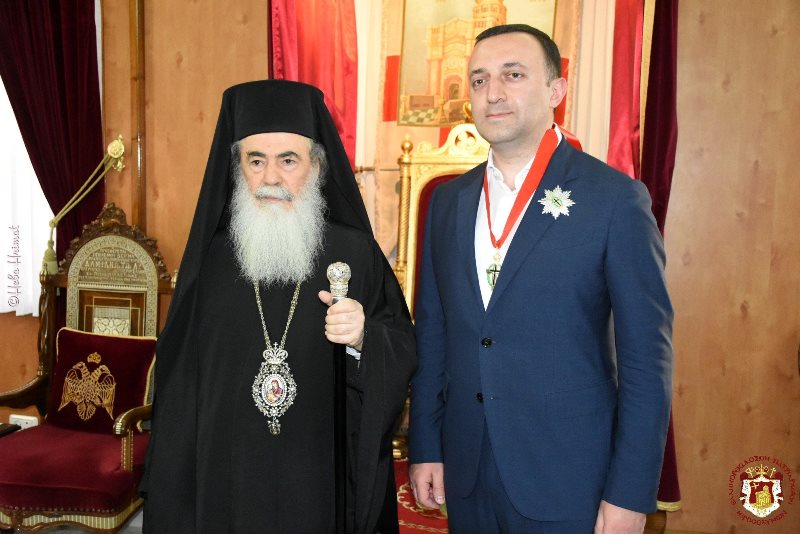 THE VISIT OF THE PRIME MINISTER OF GEORGIA TO THE PATRIARCHATE

On Monday afternoon, May 17/30, 2022, the Prime Minister of Georgia Mr Irakli Garibashvili visited the Patriarchate, accompanied by the Minister of Foreign Affairs Mr Ilia Darchiashvili, the Head of the State Security Service Mr Grigol Liluasvili, the Head of Government Administration Mr Revaz Javelidze and the Ambassador Extraordinary and Plenipotentiary Mr Lasha Zhvania.

His Excellency the PM and his entourage were warmly received by His Beatitude our Father and Patriarch of Jerusalem Theophilos and Hagiotaphite Fathers, among whom the Patriarchal Commissioner, His Eminence Metropolitan Isychios of Kapitolias, Geronda Secretary-General, His Eminence Archbishop Aristarchos of Constantina, the Elder Dragoman Archimandrite Mattheos, His Eminence Archbishop Philoumenos of Pella, Archdeacon Mark and the Secretary of the Holy and Sacred Synod Hierodeacon Simeon.

During this visit His Beatitude addressed His Excellency the Prime Minister of Georgia as per below:

We are very glad to welcome you and your distinguished delegation to our Patriarchate in this joyous Paschal season.

The Patriarchate of Jerusalem, that is to say, the Church of Jerusalem, is the Mother of all the Churches, for it was founded on the redeeming blood of our Lord Jesus Christ, who suffered, died, and was raised from the dead in this Holy City.

Thanks to the great Roman Christian emperors Constantine and his mother Helen, who took care of the Holy Places in the Holy Land and established the well-known order of the Spoudaei, which became the current monastic community of the Hagiotaphite Brotherhood, the Brotherhood of the Holy Tomb.

It is precisely this monastic community of the Holy Tomb that has been instrumental in guarding, serving, and maintaining the Holy Places, our Churches, and our Monasteries down the ages as places of prayer and worship, and therefore as places that are accessible to pilgrims and visitors without distinction.

Needless to say, the Holy Places have been sustained by the sacrifices of blood and of money.   Many have given their lives to protect them, and many benefactors have given from their financial resources to support them.   For these sacrifices, we give thanks to Almighty God.

We welcome you, Your Excellency, as a leader and as a representative of an Orthodox country and a brotherly Orthodox Church.   This means that the Church of Jerusalem and the Church of Georgia and its faithful belong to the same Body of Christ and His Church.   This is why it is imperative, as Saint Paul commands, that we are always eager to maintain the unity of the Spirit in the bond of peace (Eph. 4:3).

The challenges that we are facing here in the Holy City of Jerusalem are well known, for Jerusalem is the spiritual capital of the whole world and especially for the Orthodox Christian nations and peoples.

Our mission here is to promote the values of our Orthodox Christian tradition and heritage, which are no other than the values enshrined in the Holy Scriptures of both the Old and the New Testaments and in the Sacred Tradition of the Church.

The love of Christ and His peace, justice and reconciliation are the pillars of the Church of Jerusalem.

The Rum Orthodox Patriarchate, that is the Church of Jerusalem, as the Mother Church embraces everyone without distinction or discrimination.   This is why our Patriarchate enjoys the great respect of both the Israeli authorities and of course the Palestinian and Hashemite Kingdom of Jordan authorities as well, as you witnessed yesterday evening at our meeting in Amman.

Your Excellency, we take this opportunity to express our appreciation for your firmness and straightforward stand against globalization, which neglects Christian values.

We are therefore pleased to bestow upon you the Cross of the Holy Tomb of Our Lord Jesus Christ, so that you may be protected and inspired always by the salvific message of the Cross of the Righteous One.

The address was followed by the exchange of presents; the PM gave His Beatitude an icon of the Georgian Saint Ashot, while His Beatitude offered the Prime Minister a big icon of the renovated Sacred Edicule, icons of the Mother of God to the members of the Delegation and the Ambassador and finally Mr Garibashvili was awarded the honorary medal of the Grand Commander of the Order of Knights of the Holy Sepulchre.

Thanking for the warm reception of His Beatitude, the PM and the members of the Delegation left to venerate the Holy Sepulchre, where they were received by Geronda Sacristan, His Eminence Archbishop Isidoros of Hierapolis. Before this visit, the Delegation had visited the Holy Monastery of the Holy Cross, where Georgian Monks throve in the past.