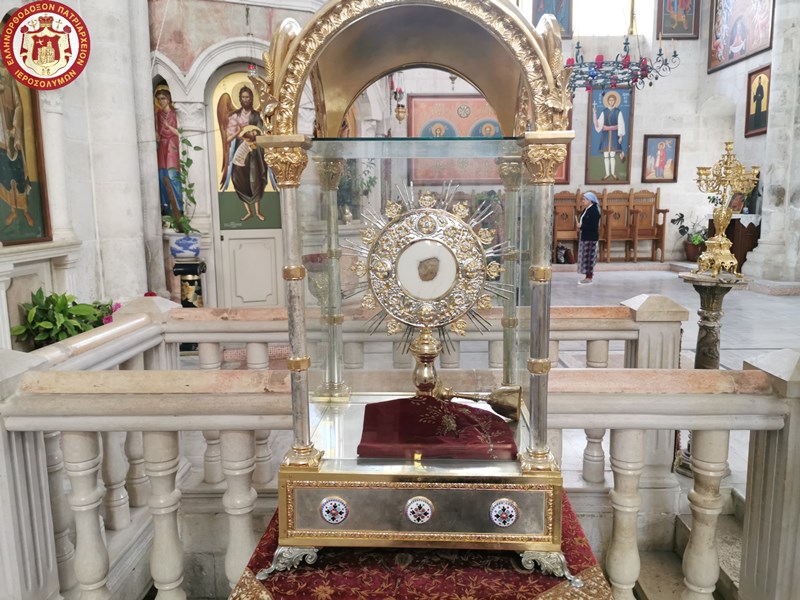 On Sunday, May 9/22, 2022, the Patriarchate celebrated the Sunday of the Samaritan woman according to the book of Pentecostarion.

On this feast, the whole Church and especially the Church of Jerusalem commemorates the event that has been handed over to us by Saint John the Evangelist (John 4, 5-42). According to this narrative, a woman from Samaria from town Sychar came to draw water from Jacob’s well and met the Lord there. He conversed with her and revealed to her that “He is the Messiah Christ” and that “God is spirit and those who worship Him shall do so in Spirit and in truth”. With His God-inspired words and because Christ told her the things she had done in her life, she believed and preached about Christ and finally suffered a martyr’s death along with members of her family, brothers, daughters and her son.

In honour of Saint Foteini, the Samaritan woman, twenty-five years ago, the Archimandrite Ioustinos Mamalos built a magnificent Church at the place of Jacob’s well, along with a chapel dedicated to the Holy Martyr Philoumenos the Hagiotaphite who suffered martyrdom at the well.

In this Church, the Divine Liturgy for the feast was officiated by His Beatitude our Father and Patriarch of Jerusalem Theophilos with co-celebrants their Eminences, Metropolitan Kyriakos of Nazareth, and the Archbishops, Aristarchos of Constantina, Philoumenos of Pela, Hagiotaphite Hieromonks, among whom the Elder Kamarasis Archimandrite Nectarios, and Archimandrite Ieronymos. The chanting was delivered by Archimandrite Leontios in Greek and the Community Choir in Arabic as the service was attended by many local faithful and pilgrims from various Orthodox Christian Churches, and faithful from the occupied territories of Samaria, Beit Jala, Beit Sahour and Bethlehem.

“At the sixth hour, the Well-spring of miracles came to the well to capture the fruit of eve; for Eve at this same hour departed from Paradise through the deceit of the serpent. The Samaritan woman, then, approached to draw water, and the Saviour, upon seeing her, said to her: Give me water to drink, and I shall fill thee with living water. And running to the city, that prudent woman at once announced to the multitudes: Come, see Christ the Lord, the Saviour of our souls”, the hymnographer of the Church proclaims (Vespers, sticheron of the Samaritan woman 1).

The grace of the Samaritan woman has gathered us all in this holy place of the Patriarch Jacob’s well, where Jesus met her, so that we may celebrate the great and wondrous doings of the Lord on earth so that we should gain the knowledge of His redeeming truth.

“There cometh a woman of Samaria to draw water: Jesus saith unto her, Give me to drink… Jesus answered and said unto her, Whosoever drinketh of this water shall thirst again: But whosoever drinketh of the water that I shall give him shall never thirst; but the water that I shall give him shall be in him a well of water springing up into everlasting life. The woman saith unto him, Sir, give me this water, that I thirst not, neither come hither to draw” (ref. John 4,7-15).

At the meeting and conversation of the Son and Word of God with the Samaritan woman, we have the revelation of the infinite philanthropy of the Saviour Christ, “Who will have all men to be saved and to come unto the knowledge of the truth” (1 Tim. 2,4). The Lord Himself revealed that He is the fountain of eternal life when He told the Samaritan woman “but the water that I shall give him shall be in him a well of water springing up into everlasting life” (John 4,14).

Interpreting these words of the Lord, Saint Cyril of Alexandria says: We must know that the Lord calls the grace of the Holy Spirit water, and if somebody becomes communicant of this grace, then he will have as supply the knowledge stemming from the Holy Scriptures, having thus no need for admonition by others.

In other words, my dear ones, the enlightening grace of the Holy Spirit “shines forth and is visible” not only to the souls of the illiterate and uneducated people, like the Samaritan woman but also to the souls of those who have faith in their hearts and long to know the most perfect mysteries, Saint Cyril of Alexandria says.

Precisely because the Samaritan woman showed zeal in learning the doctrines and the truth of the Lord, as well as the correct manner of worshipping God, Jesus revealed to her two things: first that “God is a Spirit: and they that worship him must worship him in spirit and in truth” (John 4,24). And secondly, that He is the Messiah Christ, as Saint John the Evangelist writes: “The woman saith unto him, I know that Messias cometh, which is called Christ: when he is come, he will tell us all things. Jesus saith unto her, I that speak unto thee am he” (John 4:25-26).

It is noteworthy that after this revelation to her, the Samaritan woman “The woman then left her waterpot, and went her way into the city, and saith to the men, Come, see a man, which told me all things that ever I did: is not this the Christ?” (John 4,28-29).

Interpreting this action of the Samaritan woman, Theophylactos says: “In this manner, the Samaritan woman preferred immediately Christ’s water to that of the Jacob’s spring”. While Saint Cyril of Alexandria says: “The woman that had many men, two or three days ago, now appears to be stronger and above the cares of the flesh. And the one who quite often became vulnerable to the shameful delights, now prevails over the needs of the flesh, that is the thirst and drinking; and she has transformed her needs anew for the love of Christ. That is why the hymnographer says: “O Lord, Who supportest Thy chambers in the waters, Thou, being the Water of Life, didst grant Thy worshipful springs unto the Samaritan woman who asked of Thee, when she had learned of Thy compassion” (Matins, Ode 1 of the Samaritan, Troparion 4).

Moreover, the Lord Himself says referring to the Scriptures: “He that believeth on me, as the scripture hath said, out of his belly shall flow rivers of living water” (John 7,38). And Jesus said this, referring to the Holy Spirit that those who believe in Him shall receive, according to Saint John (John 7,39).

The Samaritan woman, who was called Foteini, became a vessel of the Holy Spirit and a preacher and Apostle of the Gospel of Christ and sealed her mission with her martyrdom during the reign of the Roman Emperor Nero, as her Synaxarist mentions.

We, my dear brethren, who honour the sacred memory of the Holy Equal to the Apostles and Great Martyr Foteini, the Samaritan woman, are called to imitate the simplicity of her faith to our God and Saviour Jesus Christ. And we say this, because the Samaritan woman preferred God’s wisdom to the earthly water, namely the denaturation of the Saviour, as the hymnographer of the Mother of God says: the invisible God the Word in nature, has become visible to men as a man through the pure Mother of God, recalling man to transform his nature to your Divinity. Amen! Christ is risen! Many happy returns, blessed and peaceful!”

After the Divine Liturgy, there was a procession around the Church under the chanting of Paschal hymns and a festal reception at the Hegoumeneion.

At noon the Hegoumen and owner and renovator of the Church, Archimandrite Ioustinos hosted a meal and offered His Beatitude a beautiful Cross, similar to the one placed on top of the Sacred Edicule after its renovation in 2017, so that He may use it at the processions according to the Typikon of the Church of Jerusalem.