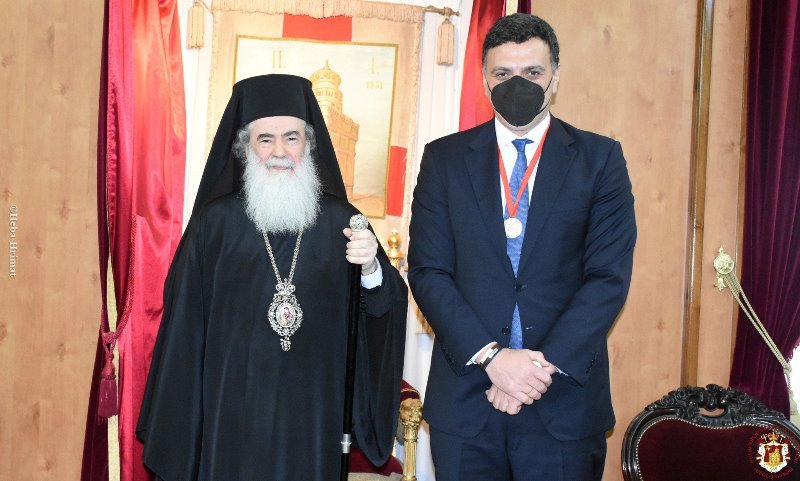 THE MINISTER OF TOURISM OF GREECE VISITS THE PATRIARCHATE

On the morning of Monday, March 15th / 28th, Mr Vassilios Kikilias, Minister of Tourism of Greece, former Minister of Health and Management of the Pandemic, visited the Patriarchate, accompanied by the Ambassador of Greece in Tel Aviv Mr Kyriakos Loukakis and the Consul General of Greece in Jerusalem Mr Evangelos Vlioras.

The Minister was warmly received by His Beatitude our Father and Patriarch of Jerusalem Theophilos and Hagiotaphite Fathers.

Welcoming the Minister, His Beatitude said that this visit takes place in a critical for the Patriarchate time, that is the pressure of the Christian existence and of the Patriarchate itself by the extreme radical elements involved the opaque contracts of mortgaging the Patriarchate’s hotels in Jaffa Gate.

The Patriarchate, His Beatitude continued, carries on under different governments and adverse conditions its conciliatory, pacifying and balancing role, to keep the Status Quo in the Old City, which means the peaceful co-existence among Christians, Jews and Muslims and it asks for this to be recognized.

The Minister said he came to Jerusalem to venerate the shrines and meet His Beatitude and having carefully listened to His concerns and words, he will act so that the Greek Government officials will intervene and ask the Israeli Government to solve the Patriarchate’s problems in governmental justice, according to its history and work.

On this occasion, His Beatitude offered the Minister a souvenir medal from the renovation of the Sacred Edicule in 2017 and a silver painting of Jerusalem, while Mr Kikilias offered in return a copy of a silver cover of the Holy Gospel.

The Minister thanked His Beatitude for this meeting and the latter wished him success in his mission, before the Minister left to venerate the Holy Sepulchre, where the Geronda Sacristan, His Eminence Archbishop Isidoros of Hierapolis welcomed him.