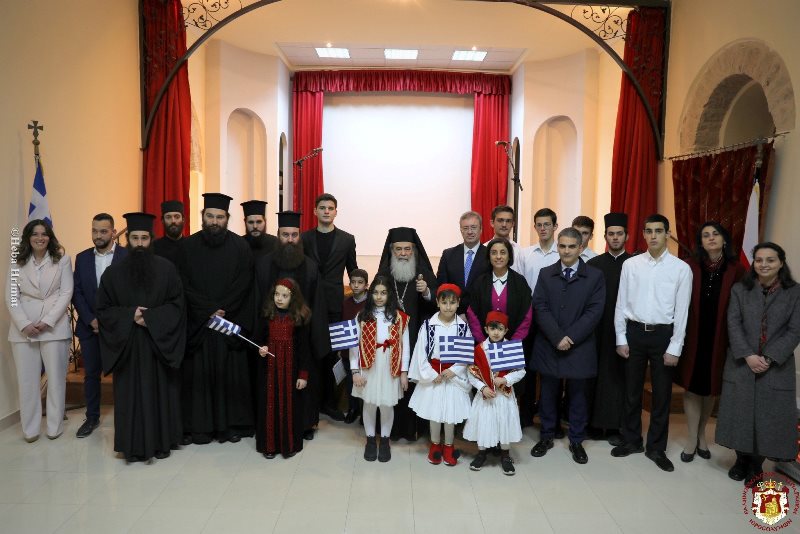 SCHOOL EVENT FOR THE ANNIVERSARY OF MARCH 25, 1821

The school event was organized by the care of the Managing Director Archimandrite Mattheos and the cooperation of the teachers and the novice students and was honoured by the presence of H.H.B. our Father and Patriarch of Jerusalem Theophilos, the Consul General of Greece in Jerusalem Mr Evangelos Vlioras, the Chairman of the School Board His Eminence Archbishop Isidoros of Hierapolis, Hagiotaphite Archimandrites and Priests, Nuns, members of the Greek community and others.

The well-organized ceremony included an introductory speech by the Managing Director, the Sermon of the day by the Secretary of the Holy and Sacred Synod Hierodeacon Simeon, performances by the students on stage and videos and songs by the guidance of Mr Vasilios Gotsopoulos.

The reciting of the poems by the students gave information on the lives and the revolutionary actions of the fighters of 1821, Constantine Kanaris, Markos Botsaris, Andreas Miaoulis, George Karaiskakis, Theodore Kolokotronis. There was also a skilled performance by students of the nursery school which moved the audience.

With all the above the struggles of our ancestors over 400 years of bitter slavery were remembered, as well as the bravery and sacrifices of the whole Greeks, with special reference to the role of the Church and of the “secret school”.

Despite the loss of life and the victims and the confiscation of property, these sacrificial actions brought the desired result of the overthrow of the Turkish yoke and the formation of the Greek state, under the rule of the Greek government, governed by the principles of grace, justice and freedom.

A special mention was made of the destruction of Smyrna on the completion of one hundred years since 1922 and the martyrdom of the Metropolitan of Smyrna Chrysostom. The contribution of the Hagiotafite Brotherhood during the period of 1821 was especially emphasized through the writings of Neophytos the Hagiotaphite Hieromonk of Cyprus.