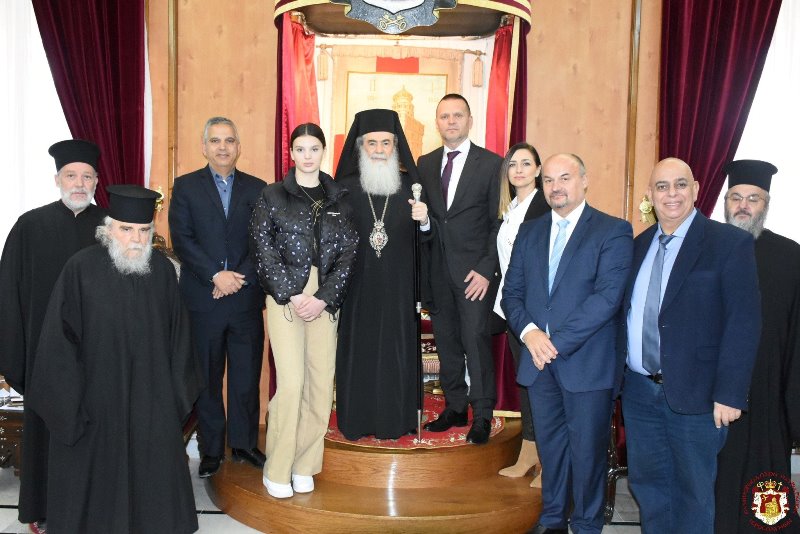 On Tuesday morning 9/22 March 2022, the Minister of Interior of the Republic of SRRSKA which belonged to Yugoslavia Mr Dragan LuKač, visited the Patriarchate accompanied by his associates Tatjiana Telic, Ambassador Duško Kovačević, Mr Eyal Goren and the Manager of the Embassy of SRPSKA in Israel Mr Hana Yona.

The Minister and his associates were received by H.H.B. our Father and Patriarch of Jerusalem Theophilos and Hagiotaphite Fathers.

The Minister expressed his thanks for his welcoming by His Beatitude and described the contemporary situation in his country where a large number of the population is Serbian Orthodox Christians for whose Jerusalem was always in their hearts and dreams.

His Beatitude thanked the Minister for his words, explaining that Jerusalem is the spiritual capital of the whole world, which the Lord sanctified by His own blood and that is why the Hagiotaphite Brotherhood safeguards it like the pupil of the eye. “As guards of Jerusalem, we participate in the struggle of the after-the-war situations. Despite the ongoing territory divisions in your country, it is important to preserve your Orthodox Christian identity”.

For this visit, Mr Dragan LuKač offered His Beatitude a hand made embroidery of SRPSKA and thanked Him for His words, while His Beatitude offered him in return a silver painting of Jerusalem and a cross for his daughter, Miss Helena LuKač and wished him governmental power from above for the completion of his mission, the prosperity of his country in righteousness and truth.

Asking for His Beatitude’s blessing, the Minister went to the Church of the Holy Sepulchre for veneration.