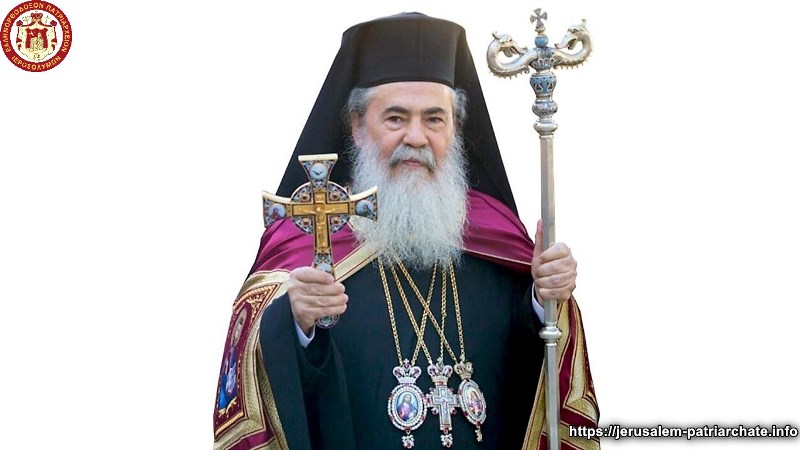 “Heaven and earth are made one today

for Christ is born.

Today God is come upon the earth

and man is gone up into the Heavens.

Today He Who by nature is invisible, for man’s sake is seen in the flesh”.

(Sticheron 2 of the Christmas Entreaty)

This event, this mystery, is celebrated today in a solemn way in praise and thanksgiving throughout the world by the Orthodox Church of Christ, especially by the Church of Jerusalem and the city of Bethlehem. The Church celebrates the superficial event of the meeting and union of heaven and earth, the fact that God descended to earth, to ascend man to heaven.

This happened “as God was pleased, as He knew”. The Father was pleased, the Word became flesh and we saw God become Incarnate. In His immeasurable love for man, according to the traversing into heaven Paul, “when the fulness of the time was come, God sent forth his Son, made of a woman, made under the law, to redeem them that were under the law, that we might receive the adoption of sons” (Gal. 4:4-5). According to the hymnographer of the Church, “the One Who was born before Lucifer from the Father without a mother, became man from the Virgin on earth, without a Father”. “He Who Is became for our sakes what He was not”. The Only Begotten Son and Word of God became also the Son of man from the Holy Spirit and the Virgin Mary, a God-man, in one hypostasis and two natures. He became poor for us, so that we may become rich, He emptied Himself, so that we may become full, He came down to earth for us, so that we may rise up to heaven, He became an infant for us, so that we may become adults, “unto a perfect man, unto the measure of the stature of the fulness of Christ” (Eph. 4:13). According to Athanasius the Great, “for our salvation, He appeared to us in a human body” (On Incarnation, P.G.1, p. 228). According to Saint Chrysostom, “God of Whom no one can speak about, Who is without form and beyond knowledge and equal to the Son, came through a Virgin’s womb and condescended to be born by a woman” (Holily 2, On the Gospel according to Matthew).

Before the vision of this mystery, even the hymnographer of the Church proclaims in ecstasy: “A strange and marvellous mystery do I behold; the cave is a heaven; the Virgin a cherubic throne; the manger a space wherein Christ God the Uncontainable One hath reclined” (Christmas Katavasiae, ode nine). Indeed, the cave became heaven. In this cave of Bethlehem in Judea, in this particular time, during the monarchy of Caesar Octavian Augustus, God reveals Himself to men, in Christ, in a bodily form. The One without beginning receives a beginning, the Invisible is seen. God reveals to men the Incarnate epiphany of His Son using elements of nature; a bright star leading the Persian Wise Kings and scientists, who “came and stood at the place where the infant was”. This wondrous epiphany He also reveals through His Angels, who were chanting in choir: “Glory to God in the highest and on earth peace, goodwill among men”, and calling the hard-working men, the shepherds who kept the night watch of their flocks. God calls both groups of men as witnesses and preachers, as accomplishers and partakers of His work. Responding to the Divine invitation, they came and “falling before their faces, they worshipped…for they saw in the cave an infant without beginning lying down”. They came to know and spoke about and proclaimed the mystery they saw, the shepherds in their town, and the Magi to their hometown Babylon, having escaped “Herod as a trifler”.

The Incarnation and Nativity according to the flesh of Christ, which we worship, awaiting the coming of the Holy Theophany, is only the beginning of God’s redeeming mysteries to man. Its succession of events is Christ’s full mission, which He inaugurated on earth “as the great angel of God’s will”. Having come from the Father, our Lord Jesus Christ, lived on earth and communed with the people, He inaugurated, founded and established the Kingdom of God and His Kingdom on earth, which is one with His body, and that is the Church. The Church continues and perpetuates His mission of conciliation, reconciliation, peaceful coexistence and love among people. The Incarnate Lord established this work with His teaching and blood through His sacrifice on the Cross. He founded a mission of sanctification, remission of sins and of education, taming and transforming the ethics of the people. Starting from Bethlehem’s cave, Christ conquered, or better say, enchanted the whole universe, without an army, without weapons, but only through those illiterate to the world twelve Apostles, who however, were educated by the Holy Spirit. The Church as the Kingdom of God on earth increased, multiplied and silently became great, without any fan recruitment, but with the integration of members through Baptism. Its head is the Incarnate Lord, the Redeemer of the world. As long as humanity does not agree and follow Christ’s message, the King Who was born, this life becomes a living hell, in battles, wars and injustice, which we often see even today; if however, humanity accepts and applies it, its life is transformed into heaven.

This Pastoral mission of sanctification, pilgrimage, reconciliation, the pacifying, does the Church of Jerusalem unceasingly apply since its foundation, at the Places of Grace, and today, at the very place of the Nativity in the flesh of its Founder, in the Holy Bethlehem, at the God-receiving Cave and the Basilica of the Nativity built by Constantine and Justine. From these holy places, it prays for the peace and good condition of the whole world, especially for the Middle East, for the liberation of the tested humanity from the various mutations of the infectious disease, and wishes to its pious flock in its jurisdiction all over the world, as well as to the reverend pilgrims, to pass this Feast of the Nativity of Christ in full health and abundance of Divine blessings.

In the Holy City of Bethlehem, Christmas 2021

Fervent supplicant for all before God

PASCHA 2022 MESSAGE OF H.H.B. THE PATRIARCH OF JERUSALEM THEOPHILOS III

THEOPHILOS III By the mercy of God Patriarch of the Holy City of Jerusalem And all...