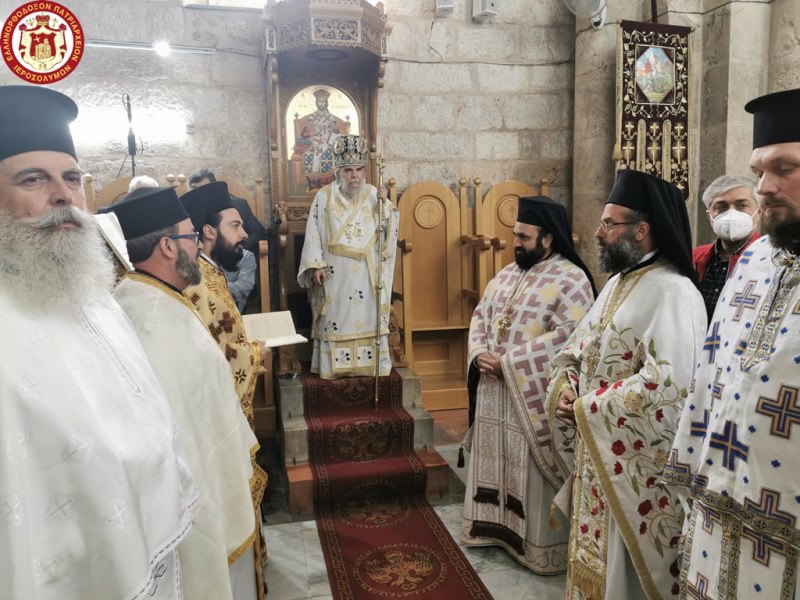 On Tuesday, 3/ 16 November 2021, the Patriarchate celebrated the feast of the Holy Glorious Great Martyr George the Trophy-bearer at the Holy Church dedicated to him where his tomb lies in Lod, a Church built by Saint Helen.

On this feast, the Church commemorates the translation of the Saint’s relics from Rome, where he suffered a martyr’s death for Christ, to Lod, the hometown of his mother.

For this reason, the Divine Liturgy was celebrated by Geronda Secretary-General, His Eminence Archbishop Aristarchos of Constantina with the co-celebration of Hagiotaphite Hieromonks along with the Hegoumen Hieromonk Marcellus and Hierodeacon Eulogios. The chanting was delivered by the Lod Community Byzantine choir in Arabic, at the attendance of a large congregation of faithful who venerated the Saint’s tomb, as well as the with the honorary presence of the representative of the Greek Embassy in Tel Aviv Mr Anastasios Konstantaras and of the Embassy of Georgia Mr David.

His Eminence delivered the following Sermon to this congregation:

“Reverend Fathers and Brethren in Christ,

What is the truth regarding these two events? The translation of the Saint’s relics and the consecration of his Church?

The memory of the Church has kept the information that before Saint George martyred in Rome, during the reign of Emperor Diocletian, he had asked his servant to transfer his body and left the will to distribute his belongings to his mother’s homeland. On his father’s side, the Saint was from Cappadocia, of Asia Minor. On his mother’s side, he was Palestinian.

Faithful to Saint George’s command, after his martyrdom his servant transferred his relics to his mother’s hometown, Lod. This transfer coincided with the visit and action of Saint Helen in the Holy Land. During that period, Saint Helen built the Church of the Holy Sepulchre, the Basilica of the Nativity in Bethlehem and many other Churches, at the places where our Lord walked and lived. After the suggestion and supplication of the Christians in Lod, who already venerated and honoured Saint George’s relics, Saint Helen built the Church above the Saint’s tomb in Lod. This Church is one of the oldest of Christianity and belongs to the Holy shrines of the Church of Jerusalem.

In this Church, we venerate a small piece of Saint George’s relics, as the Church of Jerusalem has given other pieces to other Churches. By venerating the Saint’s relic, just as we do with the Holy Icons, we are sanctified, we receive God’s grace, which is abundant in the relic because through it the Saint shed his blood for Christ, we receive healings when we are sick because the Saint’s relics have healing powers.

Numerous are the pilgrims who have come to Lod today, the Saint’s hometown, which is also called in his honour as Georgioupolis, to venerate his relic and ask for his help.

This feast today with the Holy Eucharist as the main event is a great blessing for the city of Lod and especially for the Rum Orthodox Community. We convey the wishes and blessings of His Beatitude the Patriarch of Jerusalem Theophilos to the energetic Hegoumen Father Marcellus, to the caretakers, the Rum Orthodox flock, to all who celebrate today, to our dear brethren in Christ co-celebrant Priests, and to the diplomatic representatives of various countries who honour with their presence this feast. We ask Saint George to intercede with the Lord and be our helper in the difficulties of our lives and protect our health from every illness and especially from the covid-19 virus. So be it.”

After the Divine Liturgy, the Hegoumen Hieromonk Marcellus and the Community Council hosted a meal for His Eminence and His entourage.