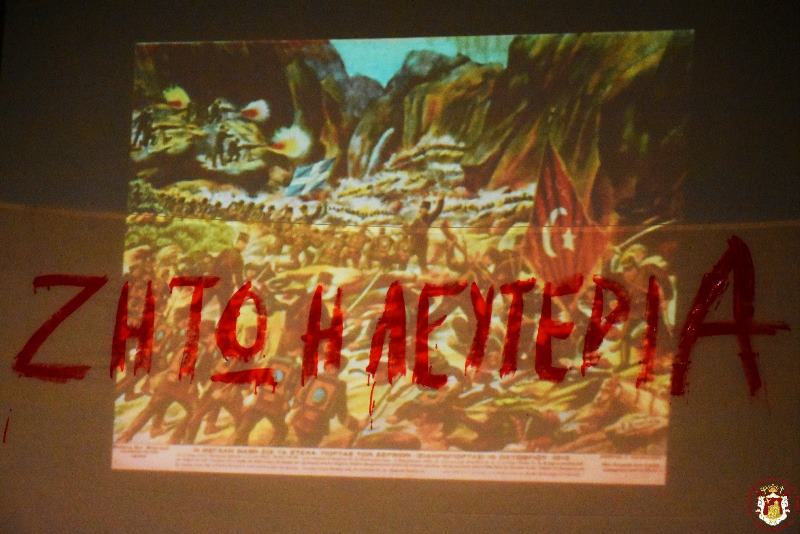 THE SCHOOL FEAST OF OCTOBER 28, 1940 AT THE PATRIARCHAL SCHOOL

On Thursday afternoon, 15/28 October 2021, there was a school ceremony in honour and remembrance of the national anniversary of October 28, 1940, at the Patriarchal School of Zion.

This ceremony was honoured by the presence of H.H.B. our Father and Patriarch of Jerusalem Theophilos, the Chairman of the School Board, His Eminence Archbishop Isidoros of Hierapolis and other Hagiotaphite Fathers, the Consul General of Greece in Jerusalem Mr Evangelos Vlioras, Monks, Nuns, members of the Greek community in Jerusalem and the first group of Greek pilgrims to have arrived in Jerusalem since the beginning of the covid-19 pandemic.

The well-organized ceremony by the good cooperation between the teachers and the students began with prayers to the Mother of God, the introductory speech by the Managing Director of the School Archimandrite Mattheos, and the Sermon of the day by the Greek Literature teacher, Mrs Charikleia Robou.

The program continued with patriotic songs, sung by the students under the guidance of the music teacher Mr Vasilios Gotsopoulos, reciting of poems and video documentaries from the battlefields of northern Greece, the barbaric Nazi military forces of the Germans, with scenes of the Greek army defending themselves, being less in numbers but a lot stronger through their bravery, worthy descendants of their glorious ancestors. The video scenes projected the wholehearted support and unity among all the Greeks, the elderly, the women and the young. Despite the consequences of the German occupation attacks, the destructions of bridges, roads, properties, individual and group executions until the extermination of villages, despite the famine and starvation, the mindset of the Greek people remained steadfast and shook off the yoke of German occupation, thanks to the help of God and the Protection of the Most Holy Theotokos, for whom, “Let us praise the graces”.

At the end of the comprehensive moving and concise ceremony, His Beatitude praised and thanked the Chairman of the School Board His Eminence Archbishop Isidoros of Hierapolis, the Managing Director Archimandrite Mattheos, the teachers and students for their performance, which transferred our minds to those difficult times of the occupation, from which the Greek people freed themselves, a people “called to liberty”, responding to the call of Jesus, who became Incarnate, was Crucified and Resurrected, and of the Apostle of the Nations Paul.

Concluding, His Beatitude thanked the Consul General of Greece Mr Vlioras for his support to the School, while the latter replied that he feels proud of the work of the Patriarchate and its School and wished progress to the students for the remaining of the school year.

THE SETTLEMENT OF THE NEW PATRIARCHAL REPRESENTATIVE IN BETHLEHEM

On Saturday afternoon 7/20 November 2021, the new Patriarchal Representative in...

Jerusalem 11.19.2021 The Greek Orthodox Patriarchate of Jerusalem condemned the activity...