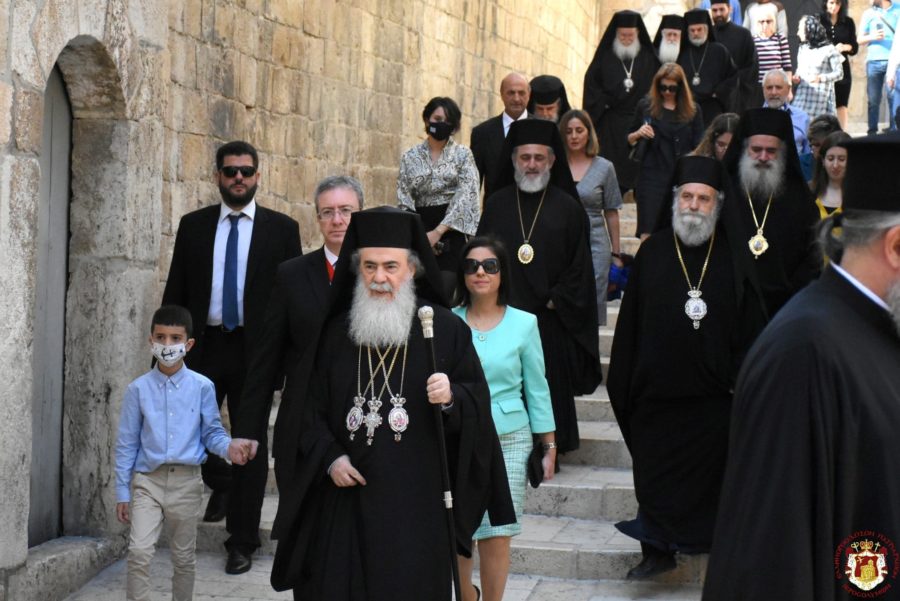 THE NATIONAL HOLIDAY OF OCTOBER 28, 1940 AT THE PATRIARCHATE

On Thursday morning, 15/28 October 2021, the Patriarchate celebrated the commemoration of the national anniversary of 1940.

For this feast, there was a Doxology at the Catholicon of the Church of the Holy Sepulchre, to our Almighty God, who released our country from the Italian military attack of 1940 and the barbaric occupation of the Nazis, which followed (1945) and let it to freedom. The Service included also a prayer for the repose of the souls of our fathers who fought bravely and fell gloriously in this fight for freedom.

After the Doxology there was a reception at the Patriarchate Reception Hall, where His Beatitude addressed those present as follows:

“Today we honour the anniversary of 28th October 1940. This historical event is interwoven with the known “NO” of the Greeks to the boldest claim of the then fascist state of Italy, to occupy “through its armed forces strategic points of Greek territory”. Italy was in alliance with the demonic and brutal Nazi and Hitler regime of Germany.

The unbridled belligerence of the powerful forces of the Axis and their advance into the homeland was interrupted by the really strong resistance of the Greeks, who fought for the divine gifts of freedom and national independence, that is, territorial integrity.

Once again, the Greek nation in its glorious and multidimensional long history showed its unwavering faith in the ancestral legacy of the natural and moral values ​​of patriotism, righteousness and freedom, as well as absolute respect for the human person. “Stand fast therefore in the liberty wherewith Christ hath made us free, and be not entangled again with the yoke of bondage” (Gal. 5:1).

The “No” of 28th October 1940 should not be considered a simple landmark of global history, but rather a reminder of the ongoing battle in the world between the sons of light against the sons of darkness, and of the power of truth against the power of lie and arrogance. “For the mystery of iniquity doth already work: only he who now letteth will let until he be taken out of the way” (2 Thess. 2:7) Saint Paul denotes.

In the dark night of the acting mystery of lawlessness but also of insanity in the so-called “Age of the New Order”, the epic of “No of 1940”, that is, the moral values ​​it embodies, shines as a perpetual beacon to those in the sea of ​​darkness, and for this, we are called to vigilance at the urging of the wise Paul: “Watch ye, stand fast in the faith, quit you like men, be strong” (1 Cor. 16:13).

Our Venerable Hagiotaphite Brotherhood, honouring as it should the epic of 1940 and joyfully participating in this commemoration of freedom and sacrificial victory, of the humiliating disaster and displacement of the hated Nazi occupying military forces, has come down to the Church of the Holy Sepulchre where we offered a thanksgiving Doxology to our God and Saviour Jesus Christ, Who was crucified and resurrected for us.

Moreover, we rendered interceding prayers for the eternal memory and blessed repose of the souls of all our Fathers and Brethren who fought for our faith and country and fell gloriously in the battlefields.

For those allow Us to raise Our glass on a toast and exclaim:

Long live the noble nation of the Rum Orthodox!

National anniversaries are milestones, occasions for reflection, which in the course of time bring back to our minds the events that have forged the collective historical memory of Greeks everywhere.

Today’s anniversary of October 28, 1940, 81 years since that glorious moment that is a point of reference for Hellenism everywhere, gives us the opportunity to recall in our minds and hearts the generation of men, women and children who filled the collective our History with countless pages of heroism, self-denial and self-sacrifice.

In the mountains of Epirus, in the Forts of Macedonia, in the waters of the Aegean, the Mediterranean and the Atlantic, in the Middle East, in occupied Greece, in all the “places where it had no daily life and feasts”, to use the expression of Odysseus Elytis, the Greeks, gave what they had most valuable to preserve our national independence and integrity, timeless ideals of all the Struggles of the Nation from 1821 until today.

The letters, from the Front, of the Greek soldiers, show the self-denial, the original, primitive patriotism and the strong will of the Greeks, to fight for the freedom, independence and integrity of the homeland, knowing well that the price of freedom is always high.

At the beginning of November 1940, the soldier Spilios Latsinos wrote to his mother and brothers:

“My beloved mother and my beloved brothers. As things are going, they look good for our army and I will be very happy since we were given the honour to go first from our regiment to take part in the battle. I address my whole family, that is, to all that I love in this world, and I will always ask you to wish more to God that our army wins than to save myself. “

At the end of November, Athanasios Kourouklis sends the following letter to his son, who is serving in the Navy, informing him that his brother was killed.

“Andrea, we are fine. Our favourite child, Christos, was killed. My child, your mother gives you her blessing, not to be upset at all. Be faithful. “

To these bastions of the homeland, who defended, “without death”, our national independence, to those who fell in battle and to those who returned from the front with a soul full of bitterness and fear, to those who fought the ruthless beast of fascism and Nazism, setting a living example of hope to the peoples of fearful Europe, to the mothers and wives who waited or mourned, to the children who were orphaned, to these “few of our brothers”, we pay tribute today.

October 28, 1940, marks the denial of totalitarianism, the resistance to fascism, our commitment to freedom and national dignity and summarizes, in a historic moment, the memories, experiences and values ​​that have always guided our national life.

It is therefore a special honour for the Consul General of Greece to address the Hellenism of the Holy Land on this special day of remembrance and pride.

As those who are in the Holy Land, we today reflect with emotion the contribution of the Greeks of Jerusalem to the Struggle of 1940.

More than 40 volunteers thickened the lines of the Armed Forces of Free Greece. When the fortunes of the War turned out to be negative for the Allied Struggle, Jerusalem and our Consulate General became, in 1942 for three months, the seat of the government of Free Greece.

On this historic day, we especially mention the Sailor Electrician Anestis Zografos, who gave his life in the sinking of the Katsoni Submarine in Skiathos on September 14, 1943, and the Sailor Engineer Emmanuel Mykonos, who was killed during the impact of a mine on Okrino 1943. The bones of the latter as well as 20 of his other comrades-in-arms, always loyal to duty, were transported from Turkey to Greece in 1947 and deposited in the ossuary of the Monument to the Fallen of our Navy.

Today, as in our historical past, the ancient Patriarchate of Jerusalem and the Hagiotaphite Brotherhood testify and strengthen the dynamic presence of Hellenism in the Holy Land.

The Patriarchate of Jerusalem, as the pre-eminent exponent of our Orthodox faith and Hellenism in the Holy Land, has been and remains a living example of godly life, faith and hope and guardian of the moral and spiritual values ​​of Greek and Orthodox witness.

In our time, as in any other, national unity and vigilance, adherence to the moral and spiritual values ​​of our Orthodox faith and the ideals of freedom and democracy, are essential supplies for our effective response to every struggle.

The anniversary of October 28, 1940, reminds us that the solidarity, and the strong will of the Greek people to maintain their freedom and national pride, determined the victorious outcome of this struggle.

This historic day is also a milestone between the present, the past and the future. By remembering the past, we guide our steps in the present and envision a better future for our country and for the whole world.

With feelings of pride for yesterday and optimism for today and tomorrow, let us renew our promise to stand on the ramparts of the struggle for freedom and our national independence and progress.