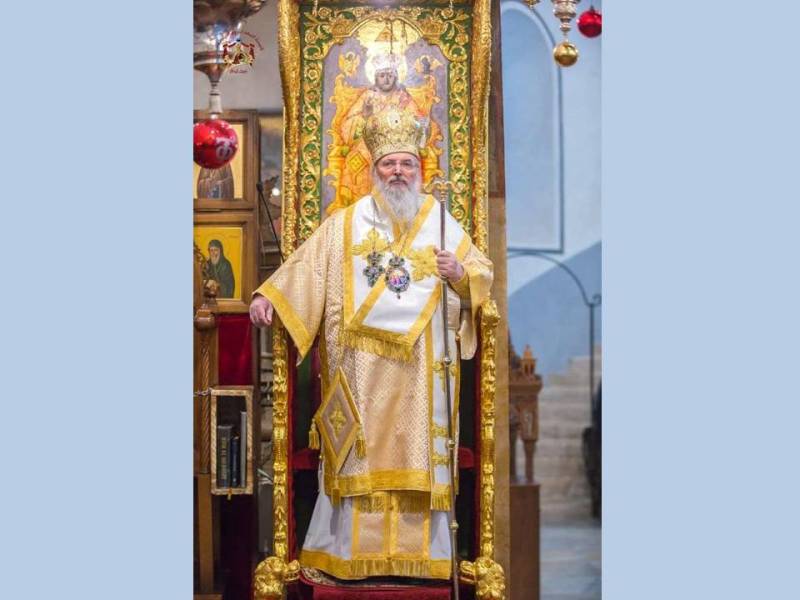 The funeral service of blessed Archbishop Theophylaktos of the Jordan, according to our previous announcement, took place at the Holy Church of Saints Constantine and Helen at 10:00 a.m. on Saturday 26 September / 9 October, the day of the commemoration of the Translation of the Holy, Glorious Apostle and Theologian John.

The funeral service was officiated by H.H.B., our Father and Patriarch of Jerusalem Theophilos, with the co-celebration of the Hagiotaphite Archbishops and Hieromonks, and the participation in prayer of Monks and Nuns and the honourable presence of the Consul General of Greece in Jerusalem Mr Evangelos Vlioras, the Ambassador of Georgia Mr Lasha, members of the Russian MISSIA, the Order of the Franciscans in the Holy Land, the Armenian Patriarchate in Jerusalem, the Syriac Church in Jerusalem and members of our Greek Community and flock, especially from Bethlehem.

The eulogy was read by Geronda Secretary-General, His Eminence Archbishop Aristarchos of Constantina as follows:

“Your Beatitude Father and Master

It is in deep grief that we stand before the dead body of our beloved brother, blessed Archbishop Theophylaktos of the Jordan. We are obviously sad about the separation, thinking we will not live with him anymore, we will not see him again in this present time. However, our sorrow is not turned into disappointment and despair, because we know that our Lord wept before the tomb of His four-day dead friend Lazarus, and then He raised him from the dead, “confirming before His Passion our common resurrection”. The words of the Apostle of the Nations also are of comfort, as he urges us: “that ye sorrow not, even as others which have no hope. For if we believe that Jesus died and rose again, even so, them also which sleep in Jesus will God bring with him” (1 Thess. 4:13-14).

In the firm faith in Christ, who “trampled over death by death” and the hope of the resurrection to life eternal, today we accompany our beloved brother to his last dwelling place on earth and his course to heaven, remembering that he came from Kozani and had graduated from the Ecclesiastical School of Xanthi. He came to the Holy Land in 1972 and joined the Hagiotaphite Brotherhood. He was sent to study Theology in Leningrad of Russia, where he excelled and then returned to Jerusalem and served with zeal and devotion in various ministries of the Patriarchate. Among those, we recall his position as the Boarding School Manager of the School of Zion, as a member of the Finance Department, as Hegoumen at the Holy Monastery of Saint Simeon in Katamon and as Hegoumen at the Tomb of Theotokos in Gethsemane. Moreover, he had been the Patriarchal Representative in Moscow and served at the Dependency of the Holy Sepulchre there for many years, enhancing a strong bond between our Patriarchate with that of Moscow. When he returned to Jerusalem, he was appointed as a member of the Holy and Sacred Synod and as Geronda Sacristan of the Church of the Holy Sepulchre. He defended the rights of our Brotherhood and supervised the preservation of the icons of the Holy Altar in the Catholicon of the Church.

Out of all his ministering positions he was especially distinguished as the Patriarchal Representative in Bethlehem, where had been serving since 2005, appointed by His Beatitude our Father and Patriarch of Jerusalem Theophilos, Who leads the funeral service today. During his fifteen-year ministry in Bethlehem, he uncompromisingly defended the rights of the Hagiotaphite Brotherhood and of our nation at the Basilica and the God-receiving Cave. He diligently supervised the ongoing project of the preservation and renovation of the roof of the Basilica. He philanthropically dealt with the needs of our Rum Orthodox flock of the Bethlehem Community.  In collaboration with the University of Thessaloniki, he established a Centre for the Teaching and Learning of the Greek Language. By his own funding and the donations of the pious pilgrims who used to flood the Shrine until recently, he made a complete renovation of the Hegoumeneion, which is the house of residence for each respective Patriarchal Representative, of the rooms of the fathers who serve in the shrine and of the halls on the ground floor, joining them in a big reception hall, suitable for the official events of the celebration of Christmas and other holidays.

He honoured his ministry as the Patriarchal Representative until the end, when two months ago, weakened by liver disease he fell in his house and suffered great wounds in his face and fracture of the cervical vertebrae. He was taken the same day to Hadassah Hospital, where he underwent neck surgery and then a tracheotomy. Nevertheless, he had no full recovery for the last two months of his hospitalization, during which he was often visited by His Beatitude, Hagiotaphite Fathers and his devoted assistant the Rum Orthodox Jandallah Masri. After many efforts on the part of the Patriarchate, he was finally admitted to the Loewenstein Rehabilitation Centre in RA’anana, where he slept in the Lord yesterday morning.

The Hagiotaphite Brotherhood, where our departed Brother has been a special and productive member, thanks those who honour his memory by their presence today, and prays to our Righteous and Philanthropic Judge, our Lord Jesus Christ, to remember his good works and patience during his illness, and forsake any voluntary or involuntary sin of his, counting his soul among the righteous and the holy in the land of the living. May his memory be ever-lasting!”

From the Central Monastery, the departed was accompanied to Bethlehem by a delegation under the lead of His Eminence Archbishop Theophanes of Gerassa.

In Bethlehem, the departed was taken to the Basilica of the Nativity, where he had been serving for the last fifteen years. A memorial service followed, and the Priests with the Community members honoured him.

Finally, the Bethlehem Scouts lead the procession to the cemetery of the Monastery, where His Eminence Archbishop Theophanes of Gerassa read the Trisagion and buried blessed Archbishop Theophylaktos.

May his memory be ever-lasting!