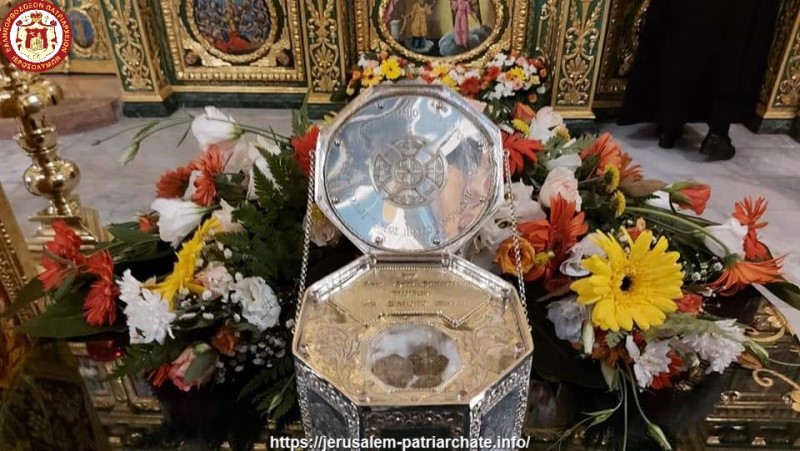 THE COMMEMORATION OF THE BEHEADING OF SAINT JOHN THE BAPTIST

On Saturday 29 August/ 11 September 2021, the Patriarchate commemorated the Beheading of Saint John the Baptist at the Holy Monastery dedicated to him on the south-west side of the Church of the Holy Sepulchre, the heart of the Christian quarter.

On this feast the Church recalls the Gospel narratives (Mark chapter 6, Matthew chapter 14) in joyful mourning; in them, Herod the Tetrarch could not bear Saint John’s reprimands for living together with Herodias, his brother Philip’s wife, so he imprisoned the Saint. On Herod’s birthday celebration, Salome, Herodias’ daughter danced, and so much did Herod like her dancing that promised he would give her anything she asked for, even the half of his kingdom. She consulted her mother and asked for the Baptist’s head. Herod was sad as he respected John, but because of his vows made in public, he sent for John’s head and the servant brought it back on a platter as a gift to the king.

In honour of “the greatest man born of a woman” Saint John the Baptist who was beheaded, Vespers was led on Friday afternoon by His Eminence Metropolitan Joachim of Helenoupolis. The Divine Liturgy on Saturday morning was officiated by His Eminence Metropolitan Isychios of Kapitolias, with the co-celebration of Elder Kamarasis Archimandrite Nectarios, Archimandrites Meletios and Porphyrios, Fr Dometian of the Russian MISSIA, and Hierodeacon Eulogios. The chanting was delivered by Archimandrite Eusevios as the service was attended by the Consul General of Greece in Jerusalem Mr Evangelos Vlioras, Nuns and laity who venerate Saint John.

During the Divine Liturgy H.H.B. our Father and Patriarch of Jerusalem Theophilos and Hagiotaphite Fathers came for veneration.

The Patriarchal and Episcopal Entourage and the congregation were offered a fasting reception by the renovator of the Monastery, the Master of Ceremonies of the Patriarchate, Archimandrite Bartholomew.