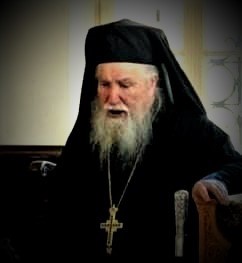 THE HAGIOTAPHITE ARCHIMANDRITE ANTHIMOS HAS SLEPT IN THE LORD

Before midnight on Thursday 20 August/ 2 September 2021, after an old age illness over the last few months, the elder Archimandrite Anthimos Theocharakis slept in the Lord at the age of 90. He was the Hegoumen of the Monastery of Men of Galilee on the Mount of Olives.

The Hagiotaphite Brotherhood, which the departed served so well according to his monastic vows, observed his funeral service under the lead of H.H.B. our Father and Patriarch of Jerusalem Theophilos at the central Monastery in Saint Thecla’s chapel at 4:00 p.m. on Friday 21 August /3 September 2021. Co-celebrants to His Beatitude were the Hagiotaphite Archbishops, Hieromonks and Hierodeacons, at the presence of the Consul General of Greece Mr Evangelos Vlioras and the participation in prayer of Monks, Nuns and representatives of the Arab-speaking flock from the Communities the departed served.

The eulogy was delivered by the Secretary-General His Eminence Archbishop Aristarchos of Constantina as follows:

In profound sorrow and contrition, we stand before the dead body of the yesterday-departed to the Lord, our elder brother, Hagiotaphite Archimandrite Anthimos. We stand wondering, how did this mystery happen? How have we become one with decay? How did we mingle with death? How was the harmonious bond between soul and body broken? How was the soul violently separated from the body? The answer to our human thoughts comes from the Church hymnographer’s words, ‘the taste of the wood of old in Eden became sorrow for Adam’; meaning that man was cut off from the union of the source of life by his own free will and brought death upon himself.

Out of His boundless mercy, God did not suffer to see His creature in decay and perdition and became man in Christ, was made incarnate and received death, so that He may save His creature this way. Our consolation in this dreadful time of death, by God’s Providence, is Christ our God, who assures us that “I am the resurrection, and the life: he that believeth in me, though he were dead, yet shall he live” (John 11:25). Similarly, comforting is the assurance of the Church in its prayers that burying a dead body is not death to those who believe in Christ, but a translation from the temporary to the eternal life, from the earthly to the heavenly, from sorrow to gladness. It is the cherishing of the heavenly pastures not “through a glass, darkly; but face to face” (1 Cor. 13:12).

In the certainty of this faith, we surpass our human sorrow for the separation from our dear brother and accompany him to his last heavenly residence. We bring to our memory that he came to the Holy Land from Crete, where he was born, at a young age and devoted himself to our Holy Community. He joined our Venerable Hagiotaphite Brotherhood and received the Monastic Schema, followed by the Office of Priesthood. Ever since, having love for his brethren, never judging anyone, being hopeful, condescending and pleasant, he served the Church of Jerusalem, the Mother of Churches and the Hagiotaphite Brotherhood therein. He served in good faith, with zeal and Hagiotaphite, Pilgrimage and Pastoral devotion in various posts; as Hegoumen of the Holy Monastery of the Transfiguration on Mount Tabor, at the Monastery of Praetorion, at the Tomb of the Theotokos in Gethsemane, at the Great Martyr George in Lydda, at the Sarantarion Mount, at the Monastery of Elisha in Jericho by the sycamore tree of Zacchaeus. For the last twenty years, he had been the Hegoumen of the Holy Monastery of Men of Galilee (Galili Viri) on the Mount of Olives, where he kept weekly Services, as he did at the chapel of the Dormition. He renovated the Monastery, building a new wing at his own expense.

Accompanying him at his departure today with these pleasant memories, we entreat our merciful God to count these good words of his and forsake his wrongdoings, whether voluntary or involuntary and place his soul in Paradise, among the holy and the righteous, granting him the joy of the light of His three-sun Divinity. So be it.

May his memory be everlasting!”

The departed Archimandrite to the eternal dwelling places of the Lord was buried at the Cemetery of the Holy Zion.

May his memory be everlasting.