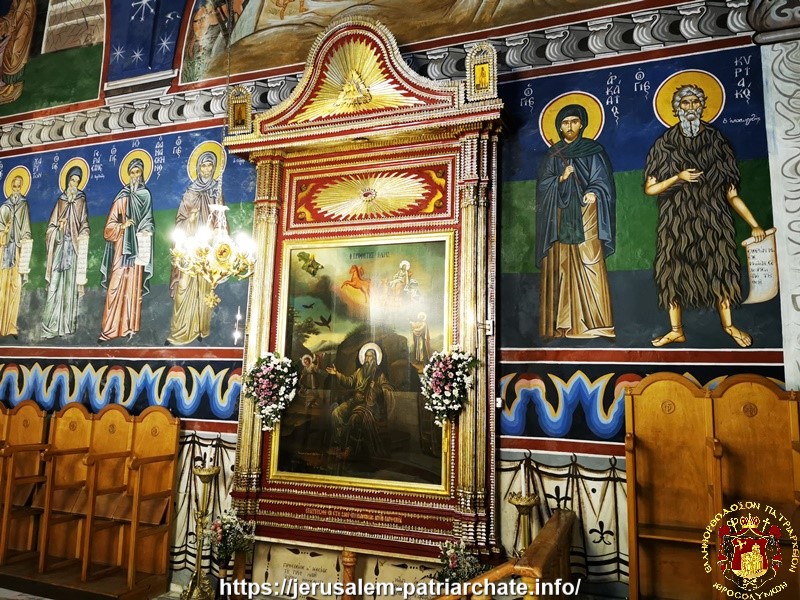 On Monday 20 July / 2 August 2021, the Patriarchate celebrated the commemoration of the holy glorious Prophet Elijah (Elias) at the Holy Monastery bearing his name between south Jerusalem and Bethlehem.

On this day the Church commemorates that prophet Elias the Thesbite was full of godly zeal regarding the fact that the God of Israel is the only God. Such was his faith and holiness that God heard his prayer and did not send any rain for three years, and only with his prayer after that the He opened the heavens and gave rain again. With prophet Elias’ prayer, God sent fire from heaven on Carmel mount and burnt the wood in the altar. For the Church, prophet Elias is an angel in the flesh, the summit and boast of the prophets, the second forerunner of Christ’s presence, who gave his grace to Elisha…”

Prophet Elias ascended in heaven in a fiery chariot and dropped his fleece down to his disciple Elisha, who used it to cross the River Jordan.

The Divine Liturgy in his Monastery was officiated by H.H.B. our Father and Patriarch of Jerusalem Theophilos with the co-celebration of their Eminences; Metropolitan Isychios of Kapitolias, Archbishop Aristarchos of Constantina, Philoumenos of Pella, Metropolitan Joachim of Helenoupolis, the Master of Ceremonies ArchimadriteBartholomew, Archimandrites Makarios and Isidoros, the ministering Priest of Saint James’ Cathedral Charalambos Bandour, Priest George Baramki, Archdeacon Mark and Hierodeacon Eulogios. The chanting was delivered by Archimandrite Eusevios and Hierodeacon Simeon on the right in Greek and Saint James’ choir under Mr Kamar on the left in Arabic, as the service was attended by the Consul General of Greece in Jerusalem Mr Evangelos Vlioras and many faithful Christians.

His Beatitude delivered the following Sermon before the Holy Communion:

“Not in an earthquake, but in a light breeze didst thou behold the presence of the Lord God, which enlightened thee of old; and mounting on a swift four-horsed chariot, thou, o Elias inspirited of God didst strangely ride through the sky, O divinely blessed, being wondrous in the sight of all” (Vespers, sticheron 2) the hymnographer proclaims.

The incarnate Angel and the Prophets’ summit and boast, Elias the Thesbite, has gathered us all today in his holy Church to celebrate his sacred commemoration and praise in hymns Christ Who glorified him.

Indeed, Elias was glorified by God the Father, becoming a vessel of the Holy Spirit, Who gave him the gift of prophecy and the power to work miracles “The Lord hath made wondrous His holy one” (Psalm 4:4).

Elias the Thesbite was correctly called “prophet of the highest and summit and boast of the prophets”. Like another Moses, he saw God, like another Paul, he “heard unspeakable words, which it is not lawful for a man to utter” (2 Cor. 12:4). Behold what his hymnographer says: “As a seer of God, The Thesbite with Moses beholdeth upon Tabor that which eye hath not seen nor ear heard, and which the heart of earthborn men hath not considered, even the Almighty Lord incarnate” (Matins, Ode 9, Troparion 3).

Referring to the power and the impact of the righteous man’s prayer, Saint James the Brother of God names Elias the zealot as a tangible example, saying: “The effectual fervent prayer of a righteous man availeth much.  Elias was a man subject to like passions as we are, and he prayed earnestly that it might not rain: and it rained not on the earth by the space of three years and six months” (James 5:16-17).

Through the power of the prayer of those “with an innocent heart and pure hands” (Psalm 23:4), Elias the Thesbite did not only “bind the heavens with his word”, but also put to shame the idolatrous priests of Baal (see 3 Kings 18:22), resurrected the son of the woman from Zarephath which belonged to Zidon (see 3 Kings 17), ascended into the heavens in a fiery chariot, threw down to Elisha his mantle and gave his disciple twofold the grace he had (see 4 Kings 2).

It is written in the Book Wisdom of Sirach: “Then Elijah arose, a prophet like fire, and his word burned like a torch… How glorious you were, Elijah, in your wondrous deeds! Whose glory is equal to yours?” (Wisdom of Sirach 48:1-4). At this point, this book’s writer wonders: How much you were glorified O Elias, with your wondrous works! Who can boast of being like you? This refers to the experience of the vision of God Elias had while he found himself in a state of despair and hidden egoism.

The strong wind, the earthquake and the fire Elias saw, as well as the thunder and lightning of God’s vision Moses had, refer to the unbearable of the divine nature. However, the fourth element of “a still small voice” which is unique in Elias’ vision of God, distinguishes his experience from that of Moses and strongly denotes “the peace of God, which passeth all understanding” (Phil. 4:7), the love and longsuffering of God.

In other words, the “breeze” – according to Father Joel Gianakopoulos –, is the symbol of God’s love. This manner of God’s appearance teaches the despondent and discouraged Prophet Elias due to triumph of evil that he should be thinking of the love and longsuffering of God, Who does not wish the death of the sinner until he repents”. “I am not come to call the righteous, but sinners to repentance” (Matt. 9:13) the Lord says. According to Saint Paul, God “will have all men to be saved, and to come unto the knowledge of the truth” (1 Tim. 2:4).

Interpreting Elias’ vision of God on Mount Horeb allegorically, Saint Cyril of Alexandria says: “everyone who like Elias the great truly seeks God, will behave like a young man and experience and thrive in the toils and struggles of virtues, not only on Mount Horeb but also in the cave of Horeb; and I mean the secrecy of the knowledge that comes along with the habituation of virtues”.

In other words, Saint Cyril considers Prophet Elias a prototype of the true spiritual work and seeking of God, namely of the mystical divine knowledge, being sure that every faithful in a practical struggle imitating Elias will be deemed worthy not only of the acquisition of virtues but also of the vision of God, namely the vision of the glory of God, which results from the cultivation of the virtues.

It is also noteworthy, my dear brethren, that God chooses natural phenomena like “a strong wind, an earthquake and fire” to reveal not only to the Prophets and the righteous but also to His deniers that He is the One who created the universe out of nought, the Creator of the visible and invisible creation. Therefore, referring to man’s fall and consequently to the fall of the creation, Saint Paul says: “For the creature was made subject to vanity, not willingly, but by reason of him who hath subjected the same in hope” (Romans 8:20).

Honouring his sacred commemoration, let us ask his intercessions to God the Father and say along with the hymnographer: “Beholding the great iniquity of men, and God’s immeasurable love for man, the Prophet Elias was troubled, being wroth; and he uttered uncompassionate words unto Him that is compassionate, and cried out: Be Thou wroth with them that have set Thee as nought, O most righteous Judge. But the bowels of the Good One were in no wise stirred to punish them that set His at nought. For He ever awaiteth the repentance of all men, since He is the only Friend of man” (Matins, Oikos). To Him belongs all glory and honour and worship unto the ages. Amen.

After the Divine Liturgy, the good caretaker of the Monastery Monk Achillios hosted a reception for all congregation and later on a meal for the Patriarchal Entourage and members of Saint James’ parish.