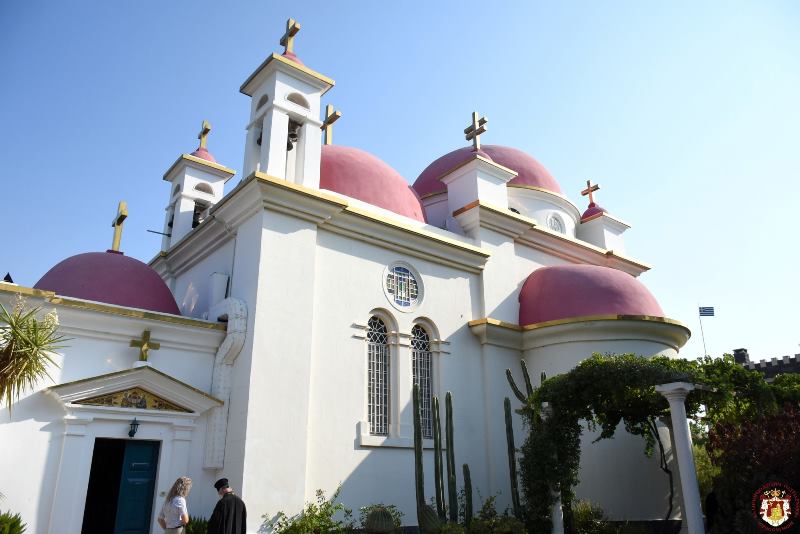 On Monday, 29 June/12 July 2021, the Patriarchate celebrated the feast of the Holy glorious and chiefs of the Apostles Peter and Paul.

The Church of Jerusalem celebrated this feast in Capernaum near the sea, on the northwest side of the river Jordan, where it meets the sea of Tiberias and in the Holy Apostles’ holy Church, which was built by the Patriarch of Jerusalem Damian in 1935.

The Divine Liturgy on the feast day was officiated by His Beatitude our Father and Patriarch of Jerusalem Theophilos with the co-celebration of their Eminences; Metropolitan Kyriakos of Nazareth, Archbishop Aristarchos of Constantina and Archbishop Isidoros of Hierapolis, Hagiotaphite Hieromonks with first in rank Elder Kamarasis Archimandrite Nectarios, Archdeacon Mark, Hierodeacon Eulogios and Arab-speaking Priests from the neighbouring areas of the Holy Metropolis of Nazareth. The chanting was delivered by the children’s Byzantine choir of Beer Sheva under the lead of His Eminence Archbishop Aristovoulos of Madaba in Greek, and the Byzantine choir of Acre under the lead of Archimandrite Philotheos in Arabic, with the participation of our flock from Galilee and elsewhere.

Before the Holy Communion, His Beatitude delivered the following sermon:

“The Lord hath made known his salvation: his righteousness hath he openly shewed in the sight of the heathen” (Psalm 98:2), the psalmist proclaims.

“Blessed be the God and Father of our Lord Jesus Christ, who according to His abundant mercy hath” (1 Peter 1:3) gathered us in this holy place of Biblical Capernaum to celebrate the commemoration of the Holy Glorious and all-lauded Chiefs of the Apostles, Peter and Paul “who after the body were far apart, yet in the Spirit were bound as one” (Vespers, Troparion 1).

Peter and Paul are called chiefs of the Apostles because they were ear-witnesses of the Lord’s calling, Who said to Peter: “Blessed art thou, Simon Barjona: for flesh and blood hath not revealed it unto thee, but my Father which is in heaven. And I say also unto thee, That thou art Peter, and upon this rock, I will build my church; and the gates of hell shall not prevail against it” (Matt. 16:17-18), and to Paul: “I am Jesus whom thou persecute…And there was a certain disciple at Damascus, named Ananias; and to him said the Lord in a vision…Arise,  and enquire in the house of Judas for one called Saul, of Tarsus…for he is a chosen vessel unto me, to bear my name before the Gentiles, and kings, and the children of Israel…Saul certain days with the disciples which were at Damascus. And straightway he preached Christ in the synagogues, that he is the Son of God” (Acts 9:5-20).

The special characteristic of Peter and Paul is the undeniable fact that they both confessed, by the revelation of the Holy Spirit, of course, that “Jesus is the Son of the Living God” (Matt. 16:16, Acts 9:19-20). Moreover, Peter explicitly received the order by the Lord: “Simon, son of Jonas, lovest thou me more than these?… Feed my lambs…  Feed my sheep” (John 21:15-17).

Interpreting these words, Saint Cyril of Alexandria says: “with the triple confession of blessed Peter, the offence of the triple denial was abolished; and through the Lord’s words ‘feed my sheep’ there is a renewal of the mission that was already given to him, by which he solved the shame of sins and wiped out the cowardice which stems from the human inability”.

As for Saint Paul, he “knew a man in Christ …such a one caught up to the third heaven…How that he was caught up into paradise, and heard unspeakable words, which it is not lawful for a man to utter” (2 Cor. 12:2-4). Referring to this remarkable experience of Paul, Saint Chrysostom wonders; “for which reason was he caught up? So that he would not think himself inferior to the rest of the apostles. Because they were with Christ, but he was not, for this, he also was caught up in glory”.

Saint Paul was glorified by God because he became the primary Apostle of nations, according to his own witness: “inasmuch as I am the apostle of the Gentiles, I magnify mine office” (Romans 11:13). Moreover, he honoured his apostolic office not only through the redeeming preaching but also through his mission, namely his personal care and sleepless daily concern for all the holy churches, according to his own words: “In weariness and painfulness, in watchings often, in hunger and thirst, in fastings often, in cold and nakedness. Beside those things that are without, that which cometh upon me daily, the care of all the churches” (2 Cor. 11:27-28).

Likewise, blessed Peter was glorified, honoured, by the Lord’s words: “And I will give unto thee the keys of the kingdom of heaven: and whatsoever thou shalt bind on earth shall be bound in heaven: and whatsoever thou shalt loose on earth shall be loosed in heaven” (Matt. 16:19). This gift of the power to bind and loose was equally received by all the Apostles, with, of course, Peter being the first, as Zigavinos comments: “This gift was given to the other Apostles, but Peter was the first one to receive it; because he was the first to confess Christ as the Son of God”.

Praising the apostolic mission of Peter and Paul, Saint Gregory Palamas says: “Υou see how brilliant and equals Peter and Paul are and how the church of Christ is supported? For this reason [the church] now gives one and the same honour to both of them, co-celebrating them equally today”.

Calling upon the holy and God-pleasing end of the life and apostolic behaviour of these two Holy Apostles, our Father Gregory urges us to imitate them in their humility and correctness through repentance. Therefore, we say along with the hymnographer: “Rejoice, O Peter, Apostle and true friend of thy Teacher, Christ our God. Rejoice, most dearly beloved Paul, preacher of the Faith and teacher of the whole world. O holy and elect yoke-fellows, since ye have boldness, entreat Christ our God [along with the intercessions of the Most Blessed Theotokos Mary] that our souls be saved” (Vespers, Aposticha Glory). Amen. Many happy and blessed returns!”

After the Divine Liturgy, the good keeper and renovator of the Monastery Monk Eirinarchos hosted a meal for the Patriarchal Entourage and the congregation at the beachfront.