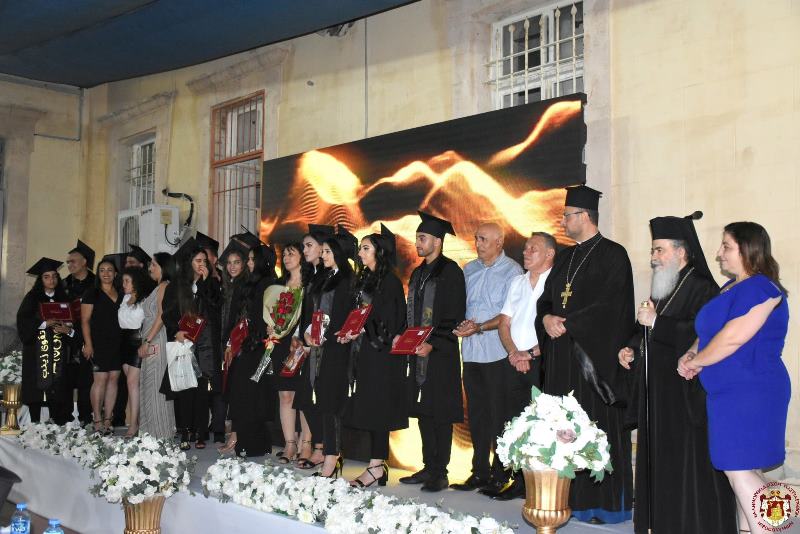 On Saturday evening, 20 June/3 July 2021, H.H.B. our Father and Patriarch of Jerusalem Theophilos, accompanied by His Eminence Archbishop Aristarchos of Constantina, Priest Issa Mousleh and Archdeacon Mark attended the graduation ceremony of the Yaffo School graduates.

In it, the principal invited by name each of the graduate students to parade on stage under the clapping of the other students and their parents and relatives. Once all graduates were on stage, Mrs Hanhan continued her address, referring to the graduate’s performance, exams in various Universities, thanking their parents for their gratitude and of course, His Beatitude for His support.

The ceremony also included songs and addresses of the graduates, in English, Hebrew and Arabic, the School Anthem, addresses from the parents’ representatives, a wish for the recovery from his operation for Archbishop Damascene of Yaffo, videos-snapshots from last years’ school activities, and the handing over of the school flag to the next year’s graduates.

The ceremony concluded with His Beatitude’s address through Father Issa Mousleh, stressing the long-term interest of the Patriarchate for the Christian and the general education of the school students, thanking the Principal for the school progress and each of the students individually, and finally wishing them academic and professional success.