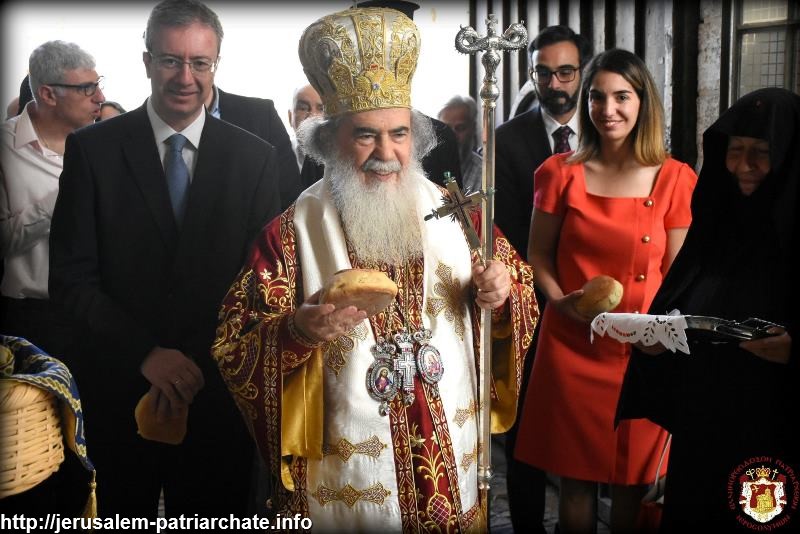 THE FEAST OF SAINTS CONSTANTINE AND HELEN AT THE PATRIARCHATE

On Thursday, 21 May / 3 June 2021, the Patriarchate celebrated the feast of the Holy glorious God-crowned Sovereigns and Equal to the Apostles, Constantine and Helen.

This feast was celebrated as a feast of the Throne of the Patriarchate because Constantine the Great and his mother Saint Helen established the All-holy Shrines, the Horrendous Golgotha, the All-holy Sepulchre, and set the Hagiotaphite Brotherhood as their guardian.

This feast was celebrated at the Patriarchal and Monastic Church of Saints Constantine and Helen at the heart of the Hagiotaphite Brotherhood, with Vespers on Wednesday afternoon, which was attended by H.H.B. our Father and Patriarch of Jerusalem Theophilos. The Service was observed by the ministering Priests of the Church and other Hagiotaphite Fathers, with the participation of the Archbishops, Hieromonks and Monks of the Brotherhood. The chanting was delivered by the Byzantine choir leader of the Church Archimandrite Eusevios and Hierodeacon Simeon. After Vespers, His Beatitude and the Fathers received the traditional boiled wheat with wine and dried bread outside the Epitropikon.

On the Feast Day, Matins and the Divine Liturgy were officiated by His Beatitude, with the co-celebration of Hagiotaphite Hieromonks, according to the Typikon order of the Brotherhood. The Liturgy was attended by faithful Christians from Jerusalem and the Consul General of Greece in Jerusalem Mr Evangelos Vlioras.

At the end of the Liturgy, His Beatitude and the other Fathers dressed in their liturgical vestments went up to the Reception Hall, followed by the congregation.

On the way to the Hall, Nun Seraphima, who is in charge of the Bakery, distributed the customary small loaves of bread to everybody.

At the Reception Hall, His Beatitude delivered the following address:

“He who was drawn up upon the Cross, the Creator of the sun and creation, drew thee near with stars from Heaven, since thou wast thyself a shining star, and He entrusted the royal dominion to thee first of all. Wherefore, we acclaim thee, O most pious King, Constantine, together with Helen thy Godly-minded mother” the hymnographer of the Church proclaims (Minaion Matins, Kathisma 2).

Our Holy Church of Christ rejoices mystically today on the commemoration of the Holy Glorious and Equal to the Apostles Sovereigns Constantine and Helen, who stopped the religion of idolatry and established the Precious Cross, in which the divine righteousness and the truth in Christ were revealed.

Therefore, we went to the Monastic Church dedicated to them and festively celebrated the Divine Liturgy surrounded by the Hagiotaphite Fathers and our brethren, honouring thus their commemoration.

The God-pleasing work and the piety of Constantine the Great are praised by the Church Historian Eusebius of Caesarea, who writes: “Constantine is the only King of the Romans who has honoured with excessive piety to God the King of all, God Himself, and the only one who has preached boldly the Word of Christ, and the only one we can say that glorified more than anyone else His Church, and the only one who banished the fallacy of believing in many gods, and delivered us from idolatry in any way, and moreover, he is the only one who was deemed worthy both in this life and in that after death, for which no man was ever able to become participant”.

Because of Constantine the Great, the Christians became the pious Royal nation of the Rum Orthodox and developed the insurmountable spiritual greatness of Romiosyne, as George Metalinos says: “Constantine the Great is the one who becomes Romios from Roman, who leads ‘Christ’s citizenship’ to the Greek Orthodox universality and globalization”. And according to Father George Florovsky, Constantine the Great significantly contributed to the integration of Hellenism into the Orthodox Christian tradition.

And we, my dear brethren, being grateful for the divine gifts of the Father of Lights, and of the great benefits of the Saints Constantine and Helen the Equals to the Apostles, let us say along with the hymnographer: “Rejoice, O great and all-wise Constantine, thou fount of Orthodox Faith, that dost water continually all the lands beneath the sun with thy sweet and delightful streams. Rejoice, O root from the which there sprouted forth the fruit that nourisheth Christ’s most holy Church. Rejoice, thou most glorious boast and fame of all the farthest ends of earth, first of Christian kings. Rejoice, thou joy of faithful men” (Minaion, Praises, Troparion 1). Christ is risen! Many Happy Returns!”

At noon there was a monastic meal for the Brotherhood.