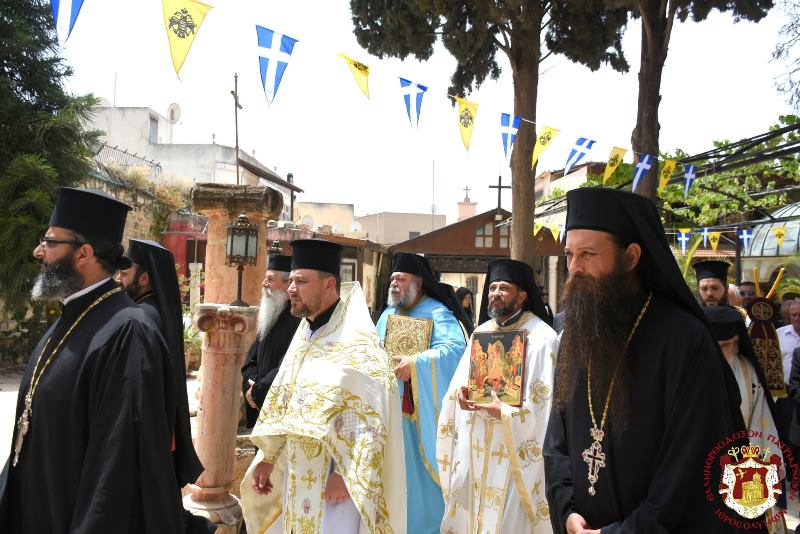 On Sunday of Thomas, 26 April/9 May 2021, our Father and Patriarch of Jerusalem Theophilos officiated the Divine Liturgy at the Holy Church of the Shrine in Cana of Galilee.

The Divine Liturgy was observed in commemoration that Thomas touched the Lord’s side and the miracle of turning water into wine at the wedding in Cana.

Co-celebrants to His Beatitude were their Eminences: Metropolitan Kyriakos of Nazareth, Archbishop Aristarchos of Constantina and the Hagiotaphite Fathers from the Cana neighbouring districts, Archimandrite Parthenios from Tiberias, and Archimandrite Hilarion from Tabor, along with the Hierodeacons Eulogios and Simeon. The changing was delivered by the Cana Byzantine choir, and the Service was attended by the Orthodox laity from Cana, in joy for the Resurrection of the Lord and for the pandemic almost coming to an end.

“It is the day of Resurrection, let us be radiant, O ye peoples; Pascha, the Lord’s Pascha; for Christ God hath brought us from death unto life, and from earth, unto Heaven, as we sing the triumphal hymn” Saint John Damascene says (Pentekostarion, Easter Sunday, Ode 1, Troparion 1).

The grace of the Holy Spirit has gathered us all in this holy shrine, at the place where our Lord Jesus Christ blessed the marriage and marked the start of His miracles, in order to celebrate the touching of the Lord’s side by Apostle Thomas and the inauguration of Christ’s Resurrection, namely the Pascha, as well as the commemoration of the Wedding in Cana of Galilee.

Today, all of us who participate in this Divine Liturgy, participate in Christ’s Resurrection, in Pascha, as Saint Chrysostom says: “Pascha is not the fasting, but the offering and the sacrifice, the daily observed synaxis [the officiated Holy Eucharist]”.

In other words, “Pascha” is the very Resurrected Christ, therefore, Saint John Damascene calls Christ “Pascha” in his hymns: “O great and most sacred Pascha, Christ; O Wisdom and Word and Power of God”. “…a new and holy Pascha, a mystic Pascha, an all-venerable Pascha, a Pascha that is Christ the Redeemer…a Pascha that hath opened to us the gates of paradise” (Easter Sunday, Ode 9, Troparion 3, Sticheron 1). In essence, Sant Damascene interprets Saint Paul’s words: “For even Christ, our Passover is sacrificed for us” (1 Cor. 5:7). Behold, therefore, why Saint John the hymnographer says: “Pascha the Lord’s Pascha; for Christ God hath brought us from earth unto life, and from earth unto Heaven”.

If Jerusalem became the place of the martyrdom and the testimony of the peak of the signs Christ performed on earth, namely of His sacrifice on the Cross and the victory over death through His Resurrection, according to the foretold: “Death is swallowed up in victory. O death, where is thy sting? O grave, where is thy victory?” (1 Cor. 15:54-55 / Isaiah 25:8), also this blessed place of Cana became the testimony of the beginning of the signs and the revelation of the glory of Jesus Christ with the changing of the water into wine here (John 2:1-11).

According to Saint Cyril of Alexandria, the Lord honoured with His presence the Wedding in order to sanctify the beginning of the birth of man, and change the old sadness regarding childbearing, as Saint Paul says: “Therefore if any man be in Christ, he is a new creature: old things are passed away; behold, all things are become new” (2 Cor. 5:17). And the glory of our Saviour shone like the sun rays and His Disciples marvelled at it and were made steadfast in their faith.

The Lord is One, “and many other signs truly did Jesus in the presence of his disciples, which are not written in this book” (John 20:30), Saint John the Evangelist says, testifying the touching of the Resurrected Lord’s side by Apostle Thomas.

The impulsive unfaithfulness of Apostle Thomas, as well as the chance he was given to touch the wounded side of the deified body of the resurrected Christ happened – according to Saint Cyril of Alexandria – “so that we can also securely believe that He resurrected His Temple and that the confession of the communion of the mystical blessing (the Holy Communion) is a confession of Christ’s Resurrection”. Moreover, it is to this cause that we are called, according to Saint John Damascene: “let us partake of the vine of divine gladness and of the Kingdom of Christ, praising Him as God unto the ages” (Easter Sunday, Ode 8, Troparion 2).

In other words, through our participation in the sacrament of the Holy Eucharist, we are called to become “partakers of the Resurrection and the Kingdom of Christ. And the Kingdom of God is within us” (Luke 17:21).

Interpreting these words, Saint Cyril of Alexandria says: “it is our option and within our power to receive it; for it is possible for every single man to enrich himself with the righteousness in Christ through faith, and having become illumined with every virtue, gain the Kingdom of Heaven. (In more detail: For every man who acquires righteousness through the faith in Christ and is decorated with all virtues, is also worthy of the Kingdom of Heaven). “For the kingdom of God is not meat and drink; but righteousness, and peace, and joy in the Holy Ghost. For he that in these things serveth Christ is acceptable to God, and approved of men” (Romans 14:17-18) Saint Paul preaches.

Through His signs, in Cana here and throughout His earthly life, as well as by His appearance to His Disciples when Thomas touched His immaculate deified side, after His Resurrection, our Lord Jesus Christ revealed His Kingdom to the world, through His enlisted Church, “and the gates of hell shall not prevail against it” (Matt. 16:18).

This treasure, namely the Church, the resurrected from the dead body of Christ let us love with all our heart and mind, my dear ones, and along with the hymnographer say: “Christ is risen from the dead, by death He hath overcome death, and to those in the graves, hath He given life”.

Chris is risen! Many happy and blessed returns!”

The Divine Liturgy was followed by a litany around the Church and the reading of the Gospel narrative regarding the miracle at the wedding in Cana by the Lord.

At noon the good keeper and Hegoumen of the Monastery Archimandrite Chrysostom hosted a meal.