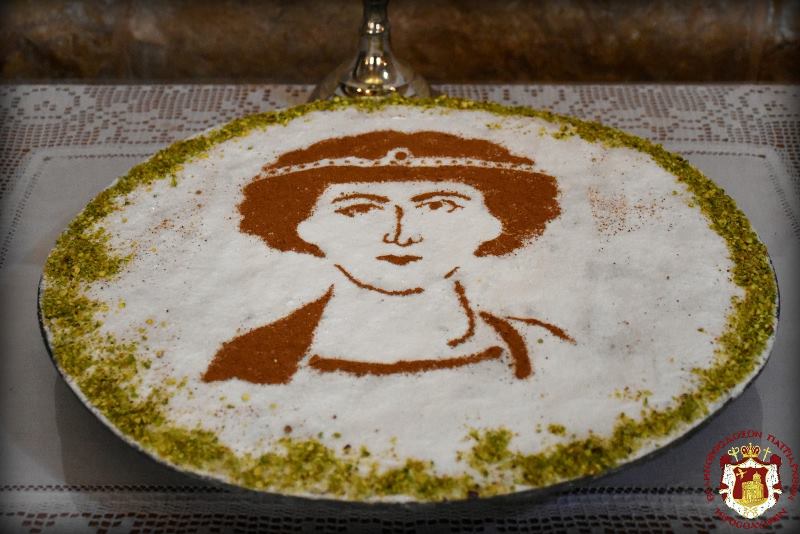 On Thursday 23 April/ 6 May 2021, the Patriarchate celebrated the commemoration of the Holy Great Martyr George the Trophy-bearer, in which the Church commemorates his martyrdom in Rome, in AD 303 during the reign of Diocletian.

His commemoration was celebrated as per below:

“The all-glorious memorial of the servant hath shined upon us as a companion of the Resurrection of Christ, whereon let us gather, ye faithful, and joyfully keep the feast” (Minaion, Matins, Ode 3, Troparion 1).

The unwaning light of the Resurrection of our Saviour Christ has guided our footsteps to this Holy Monastery dedicated to Saint George the Great Martyr, to celebrate his holy commemoration in boldness.

Saint George became a great martyr of the love of Christ during the brutal persecutions of the Christians by the Roman Emperor Diocletian (AD 284-305). George was the son of a wealthy and noble family of Cappadocia and served as an officer at the Roman army. He confessed his faith in Christ and was seized, subjected to horrible tortures and finally his head was cut off. The Church of the first centuries canonized him among its Great Holy Martyrs. The pre-Christian city of Diospolis in Palestine, our later and modern city of Lydda, where the majestic Church of the Saint is located, erected above the cenotaph of the Saint, became the centre of the Martyr’s honour. Saint George’s honour was spread to all Roman Empire in both the West and the East.

We wonder, why the marvellous and glorious George sought the martyrdom for Christ; “For longing conquered nature, persuading the lover to pass through death to the Beloved, even Christ God, the Saviour of our souls” (Vespers, Aposticha Glory), his hymnographer says. And Prophet-King David says: “As for me, I will see Your face in righteousness; I shall be satisfied when I awake in Your likeness” (Psalm 17:15).

Stephen the first-martyr became a viewer of this glory when he was stoned by those who hated him, according to Saint Luke the Evangelist: “being full of the Holy Spirit, gazed into heaven and saw the glory of God, and Jesus standing at the right hand of God” (Acts 7:55).

Interpreting these words, Cyril of Alexandria says: “God was known only in Judea, and His Name was great only in Israel, and a deep darkness covered the rest of the earth, as none other nation in the world had the divine and heavenly light, but Israel”.

Indeed, the wise George lives and moves in times when the demonic darkness of idolatry reigns over the whole earth and the Roman Emperors deify themselves and demand worship from all their subjects, much more from the Christians, as his hymnographer says: “As thou manfully strovest in piety and didst cast down deluded impiety, O Martyr, thou troddest down the audacity of the foe; for thy mind being kindled like fire with godly zeal, thou didst quench the ungodly presumption of tyrant kings. Wherefore, as is fitting, in return for the torments thou now hast received the crown and dost grant healings unto all, O most valiant prize winner George” (Matins, Ode 3 Kathisma 1).

The wonderful George is in the chorea of the great martyrs of the Church, because he was not ashamed of the martyrdom of our Lord, as Apostle Paul commands his disciple Timothy: “Therefore do not be ashamed of the testimony of our Lord, nor of me His prisoner, but share with me in the sufferings for the gospel according to the power of God” (2 Tim 1:8). In other words, Saint George became an apostle and a preacher of the redeeming truth of Christ’s Gospel, being inspired by Saint Paul’s preaching: “For here we have no continuing city, but we seek the one to come” (Hebrews 13:14).

And the continuing city is no other than the eternal life in the Kingdom of God, for which the Lord says: “But seek first the kingdom of God and His righteousness, and all these things shall be added to you” (Matt. 6:33). ““We must through many tribulations enter the kingdom of God” (Acts 14:22), Saint Paul preaches.

The martyrs of Christ’s love are the boast and the glory of the Church, and for this reason, they have special honour. This is because the martyrs’ relics bestow healings to those who honour and venerate them, and their incorruptibility testifies and confesses Christ’s resurrection from the dead.

Moreover, the bloody martyrdom of the Holy Martyrs is a practical and unquestionable testimony of the sacrifice of the Son of God and our Lord Jesus Christ on the Cross, for the salvation of our human race. That is why Saint Paul says: “Now if we died with Christ, we believe that we shall also live with Him, knowing that Christ, having been raised from the dead, dies no more. Death no longer has dominion over Him” (Romans 6:8-9).

Today’s honoured Saint George the Great Martyr and Trophy-bearer was clad in this very death of incorruptibility of Christ, namely the light of Christ’s resurrection. The cultivator of reverence George longed for this Saviour of the world, Who bore our human flesh and was born from the Virgin Theotokos Mary. Therefore, as we honour his sacred commemoration in his Holy Monastery in the Old City of Jerusalem, let us entreat him along with the hymnographer and say: “As thou standest filled with light at the worshipful tribunal of the Sovereign of all, O George, thou crowned Martyr of Christ, preserve by thine entreaties and thy protection those who call on thee with most fervent faith and love” (Matins, Ode 2, Troparion 1). Amen. Christ is Risen!”

After the Divine Liturgy, the renovator of the Monastery Reverend Abbess Marianna hosted a reception for the Patriarchal Entourage and the Congregation at the Hegoumeneion and the courtyard of the Church.