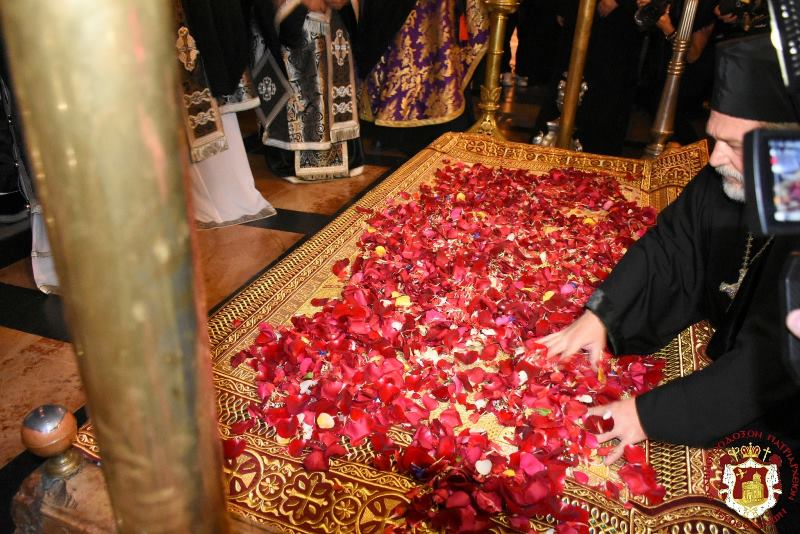 On Good Friday evening, 17/30 April 2021, the Epitaph Service was held at the Church of the Holy Sepulchre.

On this feast, which was led by our Father and Patriarch of Jerusalem Theophilos the chanting began with the Canon of Holy Saturday, until His Beatitude, the Archbishops and the Priests were dressed in their liturgical vestments. Then the Synaxarion of the day was read, about the Burial and the Cathode into Hades of our Lord Jesus Christ, followed by the Procession with a special prayer around each of the shrines. After the shrines on the ground floor, the Procession marched up to the Horrendous Golgotha, the Gospel narrative on the Crucifixion was read and the silk corporal, full of flowers, was removed from the Altar, to be placed at the Holy Deposition slate, before marching three times around the shrine, then around the Sacred Edicule and the silk corporal was placed on the Holy Tomb.

Then the chanting of the 3 Parts of the Lamentations began, to conclude with the Epitaph Sermon which was read by Geronda Secretary-General, His Eminence Archbishop Aristarchos of Constantina. The Sermon is as per below:

“How shall I bury Thee, my God?

How shall I wrap Thee in a winding sheet?

How shall I touch Thy most pure body with my hands?

What song at Thy departure shall I sing to Thee,

I magnify Thy sufferings; I sing the praises of Thy burial

and Thy Resurrection crying: O Lord, Glory to Thee”

With these weeping words,

Joseph of Arimathaea and Nicodemus took the Son and Word of God, our Lord Jesus Christ the Nazarene, down from the Wood and buried Him in a new tomb “wherein was never man yet laid” (John 19:41).

This event, the deposition from the Cross and the burial of the Divine Body of our Lord and God and Saviour Jesus Christ and His descent into Hades, is commemorated by the Church today. It is held at Matins before the dawn of the Holy and Great Saturday, during this modest contrite Epitaph Service on Holy and Great Friday evening.

Today the Church primarily commemorates the Cross. It gratefully remembers that for the salvation of the people, the Lord willingly accepted the Passion on the Cross, for which He was condemned unjustly and illegally.

It commemorates the Lord’s words: “Therefore doth my Father love me, because I lay down my life, that I might take it again. No man taketh it from me, but I lay it down of myself. I have power to lay it down, and I have power to take it again. This commandment have I received of my Father” (John 10:17-18). The Cross was God’s Providence in order to heal the man, the great wound. This redeeming Providence of God does not make the crucifiers choice a necessity. They behaved according to their own free will. They crucified Jesus of Nazareth because they did not recognize the Son of God in Him. The healings He performed on the Sabbath days were considered a violation of God’s Law; the remission of sins and the revelation that He is “the Christ, the Son of the Blessed” (Mark 14:21). However, in His love, God turned the iniquity of men into their benevolence. He granted them remission of their sins by the Blood of the Incarnate Son of His; “by the emptying of Your divinely flowing blood, O Master Christ, from Your pure and life-giving side” (Octoechos, Sunday Matins, Ode 9, tone 5) as it is inscribed on the Holy Altar of the Horrendous Golgotha. “Springs of remission, life, salvation and eternal life” are gushing out from the Blood and Water that were shed from the Cross once and for all, and from the Blood that is shed in every Holy Eucharist “the Blood of the New Testament” (Luke 22:23).

The great Prophet Isaiah foretold centuries ago about this mystery of the Divine Philanthropy: “Behold, my servant shall deal prudently, He shall be exalted and extolled, and be very high. Surely Ηe hath borne our griefs, and carried our sorrows: yet we did esteem Ηim stricken, smitten of God, and afflicted. But He was wounded for our transgressions, He was bruised for our iniquities: the chastisement of our peace was upon Him, and with His stripes, we are healed. All we, like sheep have gone astray; we have turned every one to his own way, and the Lord hath laid on Him the iniquity of us all. He was oppressed, and He was afflicted, yet He opened not his mouth: He is brought as a lamb to the slaughter” (Reading of Isaiah, 6th Royal Hour of Good Friday).

Despite this foretelling by Isaiah and of the other Prophets’ words, despite the fact that the Incarnate Lord “Jesus of Nazareth spent” His life on earth “benefiting and healing people”(Acts 10:38), despite the signs and the miracles, despite that fact that “never man spake like this man” (John 7:46), “the preaching of the Cross” according to Saint Paul remains for “the Jews a stumblingblock, and unto the Greeks foolishness” (1 Cor. 1:23), but to those who believe in Him “it is the power of God” (1 Cor. 1:18).

Christ’s Cross, “as God’s power and God’s wisdom” is believed and venerated by the Church, His Body, which has been gushed from His pierced side. The Church accepts and preaches Him to the world, as her Crucified Bridegroom and as the one who through the meekness of the Cross is “the King of Glory”, Who by the power of His sacrifice on the Cross and humility went down to Hades with Divine authority and His descent into Hades, as it is also depicted in the icon, is already His Resurrection for the Church, as He co-raises Adam and his long-ago bound descendants, and they return to Paradise; this is the event that we experience at this moment with the Cross. For this reason, the grateful Church sings thus: “We venerate Thy Cross Oh Master, and we magnify and glorify Thy Resurrection”.

The Church has also included our Roman Greek nation among those who accept the Cross of Christ as “God’s power and God’s wisdom”. This nation has been distinguished at all fields of science and left an incomparable beneficial – classical and scientific – heritage to all the nations; it also distinguished itself – what an irony! – at mythological imagination and ingenuity. However, it realised the non-existence of its mythology “at the appointed time” and accepted Christ and was transformed from a pagan nation to a Christian nation, a holy nation.  The first fruits of this “little leaven which leaveneth the whole lump” (1 Cor. 5:6), were those who believed in Apostle Paul’s preaching unto Areopagus, “among the which was Dionysius the Areopagite, and a woman named Damaris, and others with them” (Acts 17:34). Ever since, as Rum Orthodox, we gratefully accept the gift of “believing in Christ and suffering for Christ”, as grace and a blessing, and as a talent, we need to multiply, without boasting over “the good olive tree” (Romans 11:24), always remembering that we were a wild olive tree, and were “grafted in among them, and with them partakest of the root and fatness of the olive tree” (Romans 11;17) and pray for Christ’s crucifiers, just as Christ prayed for them from the Cross: “Father, forgive them; for they know not what they do” (Luke 23:34), and co-suffer with them, just as Paul said: “I could wish that myself were accursed from Christ for my brethren”, meaning that I could wish, if possible, to be separated for good from Christ for the sake of my brethren, “my kinsmen according to the flesh, which are the Jews” (Romans 9:3). We do not forget that “the gifts and calling of God are without repentance” (Romans 11:29), which means that the first-called Jews and all the unbeliever Gentiles are still awaited at the Cross of Christ. This was and shall be the mindset of our nation, that of Paul’s, that is, Jewish, Evangelical, not anti-Jewish or Anti-Semitic.

These marvels of God, of the salvation of the people in Christ Incarnate and Crucified, Who slept in the flesh and was Resurrected, the Church of Holy Sion, “which was the first to receive the remission of sins through the Resurrection”, holds like a gift and a consignment not only to experience physically but also to preach and proclaim them at the land where they were revealed. At this hour, surrounding the blessed and life-giving Tomb, in this contrite Epitaph Ceremony, which is blessed by its Holy Primate, His Beatitude the Patriarch of Jerusalem Theophilos III, the Church of Jerusalem primarily prays for the rapid and complete cure of the tested humanity by the infectious pandemic, for the peace and good state of the whole world, for the stability and unity of the Holy Orthodox Churches of God and for the advancement and progress of our nation for the glory of our Trinitarian God. So be it.”

After the Sermon the changing by Hierodeacon Simeon and Mr Vasilios Gotsopoulos continued with the Blessings, the Praises and the contrite Service finished. The Service was attended by the Consul General of Greece in Jerusalem Mr Evangelos Vlioras and the Consulate staff, along with many faithful, due to the lifting of the covid-19 restrictions. However, there were no pilgrims, as they are still not allowed to travel to Israel.