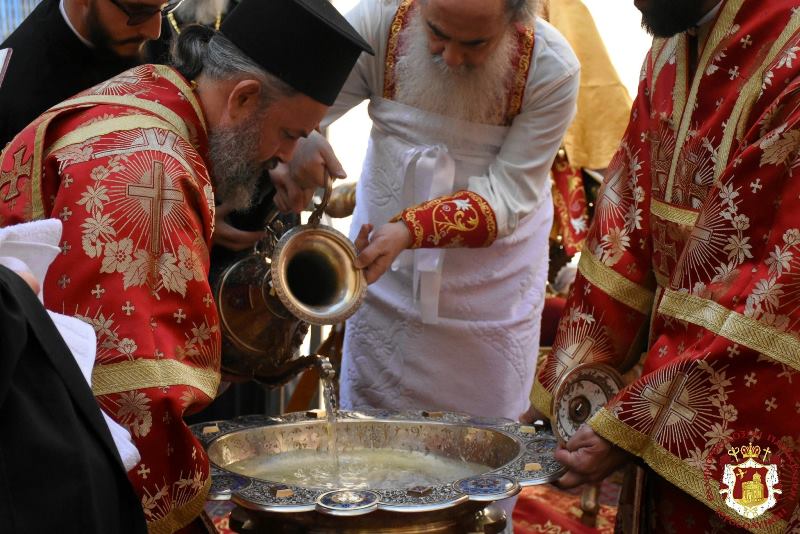 On Holy Thursday, 16/29 April 2021, the Service of the sacred washing of the Disciples’ feet was observed at the Holy Courtyard of the Church of the Holy Sepulchre. The Service began at 9.00 am, immediately after the end of the Divine Liturgy of Saint Basil at Saint James Cathedral, which was led by H.H.B. our Father and Patriarch of Jerusalem Theophilos. Co-celebrants to His Beatitude were their Eminences, Metropolitan Isychios of Kapitolias and the Archbishops; Aristarchos of Constantina, Theodosios of Sebastia and Philoumenos of Pella, Hagiotaphite Hieromonks, Arab-speaking Priests, Archdeacon Mark and other Deacons, under the chanting of on the right in Greek and the Cathedral’s Choir led by Mr Rimon Kamar on the left in Arabic.

The Service of the sacred washing of the Disciple’s feet, which is unique in the Orthodox Church was led by H.H.B. our Father and Patriarch of Jerusalem Theophilos, who washed the feet of twelve Hieromonks in remembrance of the event when the Lord washed His Disciples’ feet, setting an example of humility for us. The relevant Gospel narratives were read by His Eminence Metropolitan Joachim of Helenoupolis.

The Service was attended by the Consul General of Greece in Jerusalem Mr Evangelos Vlioras, the representative of the Ministry of Interior of Israel Mr Caesar Marjie and local faithful, who were standing at the Holy Courtyard and the Metochion of Gethsemane. There were no pilgrims due to the covid-19 pandemic.

At the end of the Service, bells tolling, the Patriarchal Entourage returned to the Patriarchate Headquarters, where the Archbishops were waiting for them according to the Order at the Reception Hall.