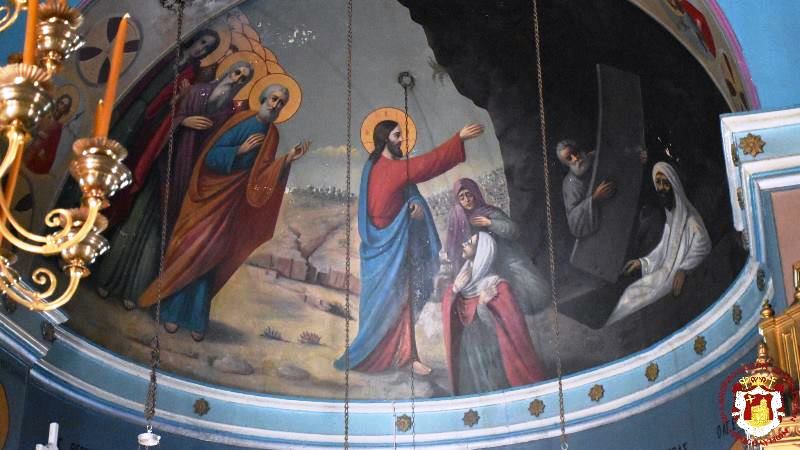 On Saturday 11/24 April 2021, which is Lazarus’ Saturday according to the Triodion, the commemoration of the resurrection of the Lord’s friend Lazarus, who was dead for four days, was celebrated by the Patriarchate at the Holy Monastery of Martha and Mary.

On this day the Church as a whole and especially the Church of Jerusalem commemorates the narrative according to Saint John the Evangelist; the Lord came from the desert in Bethany and was welcomed by Lazarus’ sisters, Martha and Mary, we went to his tomb and resurrected him saying “Lazarus, come forth” (John 11: 43).

This event, which “signifies the common resurrection” was celebrated on Friday afternoon with Vespers, by the ministering Archimandrite Epiphanios, and on Saturday morning with the Divine Liturgy which was officiated by H.H.B. our Father and Patriarch of Jerusalem Theophilos. Co-celebrants to His Beatitude were their Eminences; Metropolitan Isychios of Kapitolias, Archbishop Aristarchos of Constantina and Metropolitan Joachim of Helenoupolis, Hagiotaphite Hieromonks, and Arab-speaking Priests, at the chanting of Archimandrite Eusevios and Mr Vasilios Gotsopoulos. The Service was attended by the Consul General of Greece in Jerusalem Mr Evangelos Vlioras and a few faithful. There were no pilgrims due to the continuing covid-19 restrictions.

“Jesus said unto her, I am the resurrection, and the life: he that believeth in me, though he were dead, yet shall he live: And whosoever liveth and believeth in me shall never die. Believest thou this? She saith unto him, Yea, Lord: I believe that thou art the Christ, the Son of God, which should come into the world” (John 11:25-27).

Having completed the forty days that profit to our soul, we are gathered today by the Grace of the Holy Spirit to the historic biblical town of Bethany, Lazarus’ hometown, in order to celebrate his rising from the dead by his friend and our Saviour Jesus Christ.

This event, Lazarus’ rising from the dead, was written in detail by Saint John the Evangelist. And this was done so that it would be believed that Jesus is the Son of God and God and that He was risen, and also that there will be a resurrection of the dead. “I am the resurrection, and the life: he that believeth in me, though he were dead, yet shall he live” (John 11:25-26) the Lord says.

And when Jesus heard that Lazarus was gravely ill, He said to his sisters, Martha and Mary that this sickness is not unto death, but for the glory of God, that the Son of God might be glorified thereby (ref. John 11:1-4).  “Jesus therefore again groaning in himself cometh to the grave. It was a cave, and a stone lay upon it” (John 11:38). “Jesus cried with a loud voice, Lazarus, come forth. And he that was dead came forth, bound hand and foot with graveclothes” (John 11:43-44).

Jesus did these things in front of the Disciples to introduce them to the faith of the resurrection from the dead and prepare them for that, as the hymnographer says: “O Lord, Thy voice destroyed the dominion of hell, and the word of Thy power raised from the tomb him that had been four days dead; and Lazarus became the saving first-fruits of the regeneration of the world”. And elsewhere, “Lord, wishing to give to Thy Disciples the assurance of Thy Resurrection from the dead, Thou hast come to the tomb of Lazarus and called him by name. Then was hell despoiled, and it released the one that had been four days dead, as he called upon Thee: O blessed Lord, glory to Thee” (Lazarus Vespers, stichera 5,6).

It is a true fact that Christ worked marvels during His life on earth (Acts 6:8), namely miracles, such as the resurrection of Jairus’ daughter, (Mark 5:22-43), and the resurrection of the woman’s only son in the town Nain (Luke 7:11-17), in order to reveal the glory of Jesus Christ and the long-ago hidden mystery of the divine providence which was enacted in Him.

Lazarus’ resurrection in this biblical town of Bethany a little while before Christ’s Passion on the Cross was not only a “wondrous sign” revealing the glory of the Son and Word of God, but also “the salvation preface of the regeneration”, namely the common resurrection of all people in the human body of Jesus Christ, as well as the assurance and reply to His disciples’ question: “Then answered Peter and said unto him, Behold, we have forsaken all, and followed thee; what shall we have therefore? And Jesus said unto them, Verily I say unto you, That ye which have followed me, in the regeneration when the Son of man shall sit in the throne of his glory, ye also shall sit upon twelve thrones, judging the twelve tribes of Israel” (Matt. 19:27-28).

According to Zigavinos, “Christ calls regeneration the raising from the dead as a new life”, meaning a second birth and reshaping and regeneration of the creation. “For our conversation is in heaven; from whence also we look for the Saviour, the Lord Jesus Christ: Who shall change our vile body, that it may be fashioned like unto his glorious body, according to the working whereby he is able even to subdue all things unto himself” (Phil. 3:20-21) Saint Paul preaches.

Behold, therefore, my dear brethren, why the raising from the dead of the four-days-dead Lazarus is the salvation preface of the common resurrection of our God and Saviour Jesus Christ.

We, my dear brethren, having completed the forty days that profit to our soul, and drawing nigh to the Holy Week of the Passions and the three-day burial of our Lord Jesus Christ, let us say along with the hymnographer: “by the intercessions of Lazarus, Martha and Mary, deem us worthy to become viewers of Your Cross and Passion, O Lord, and of the luminous queen of days, the day of Your Resurrection, O friend of man”.

Many happy returns and Happy Easter!”

The Divine Liturgy was followed by a Procession to Lazarus’ tomb under the lead of His Eminence Metropolitan Joachim of Helenoupolis, where the Gospel narrative of Lazarus’ resurrection according to Saint John was read.

Finally, the Episcopal Entourage visited the Bethany Council and then the Elder Abbess Eupraxia hosted a meal for the Patriarchal Entourage at the Hegoumeneion.