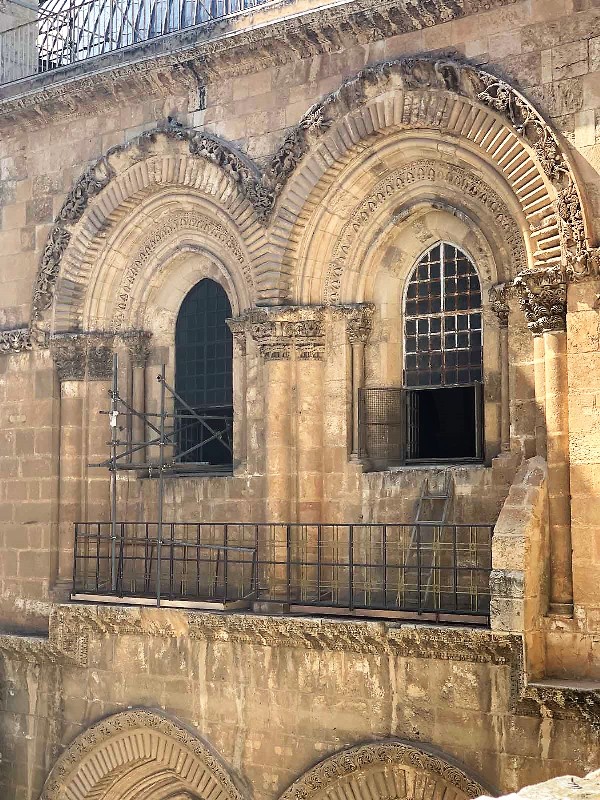 Shortly before midnight on Wednesday 1/14 April 2021, the workers of the Armenian clergy of Jerusalem climbed inside their window to the narrow balcony of the facade of the Church of the Holy Sepulchre where there is a wooden ladder and placed railings.

This was realized by Geronda Sacristan His Eminence Archbishop Isidoros of Hierapolis while he was at his house in the Monastery of Abraham and called out to the workers to stop. As they did not listen to his request, Geronda Sacristan called the Police, informing them of the Hagiotaphite Fathers’ intention to come down to the Church of the Holy Sepulchre from the Central Monastery and demolish the railings by force. Then the Police threatened the workers and made them stop their work, before managing to fasten the railings.

This episode occurred because the Armenians deceived the Police, claiming they wanted to go up to lower the scaffolding, which they had placed in order to paint their window, and that was their only right to be at that place. They have been refusing to lower this scaffolding for the last eight months, despite a joint letter from the Jerusalem Patriarchate and the Franciscans to the Israeli Interior Ministry and the Israeli Police in Jerusalem.

On Thursday morning, 2/15 April 2021, H.H.B. our Father and Patriarch of Jerusalem Theophilos received at the Patriarchate the Custos of the Holy Land Reverend Francesco Patton and his colleagues, Fr Dobromiro and Fr Athanasios Makora and jointly protested to the Police, demanding the removal of the railings within the same day, as this act is a blatant violation of the Status Quo and brutal vandalism against the oldest and holiest monument of Christianity.

EASTER VISITS OF THE WESTERN CHURCHES AT THE PATRIARCHATE