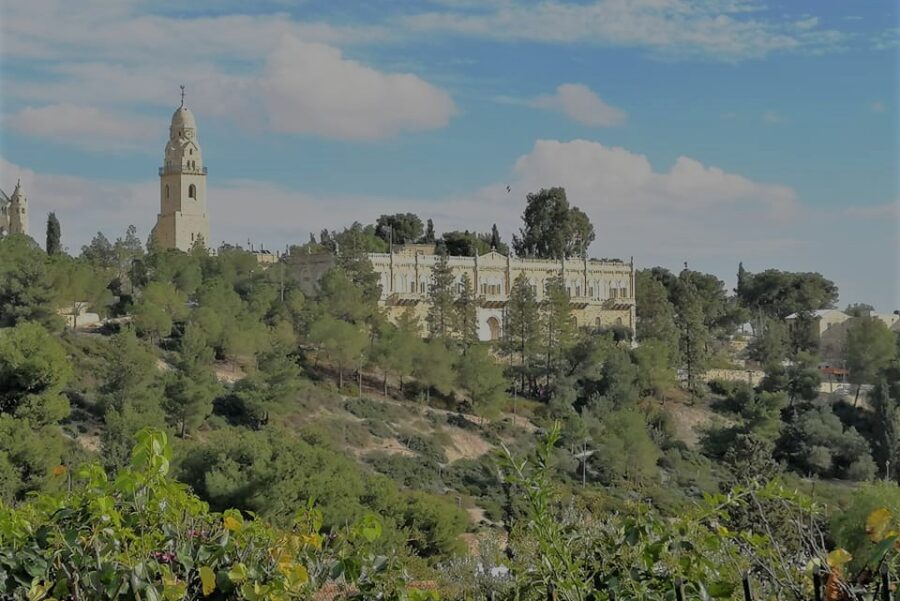 On Thursday afternoon, 12/25 March 2021, the Patriarchal Schoon on the hill of Zion hosted a ceremony for the feast for the Anniversary of 25 March 1821.

The feast was honoured by the presence of H.H.B. our Father and Patriarch of Jerusalem Theophilos, His Excellency the Consul General of Greece in Jerusalem Mr Evangelos Vlioras and the Consulate Staff, the Chairman of the SchoolBoard, His Eminence Archbishop Isidoros of Hierapolis, along with Monks, Nuns and members of the Greek Community.

The ceremony included an introductory speech by the Managing Director of the School, Elder Dragoman Archimandrite Mattheos, the Sermon of the Day by the Science teacher Mr Nikolaos Souliotis, songs by the School choir, under the lead of the Byzantine music teacher Mr Vasilios Gotsopoulos, reciting of poems, short plays and reading of texts by the School Students.

With all the performance and the videos played on the large screen, the audience was transferred to the four hundred years of bitter slavery of our nation under the Ottoman Empire which treated the Christians brutally, with persecutions, fights, exile, deaths, martyrdoms, beheadings, mass kidnapping of children, and myriads of other sufferings, that our nation endured, without losing its Greek and Byzantine (Rum) identity. Instead, the Greeks held a national uprising against all these, with unparalleled bravery and sacrifices of blood.

The Revolution started from Peloponessos and Argosaronikos and gradually expanded to the rest of the mainland and the islands, and after an eight-year struggle, it concluded to the formation and recognition of the New Greek State in the year 1830 after the naval battle of Navarino.

At the end of this modest and moving ceremony, His Beatitude and the Consul General thanked the Managing Director of the School, the teachers and the students for their performance, which invoked feelings of national pride and thrill, along with a strong reminder of the 200th Anniversary, especially for the politics, that we should follow the example of the 1821 fighters and increase the national inheritance bequeathed by them.