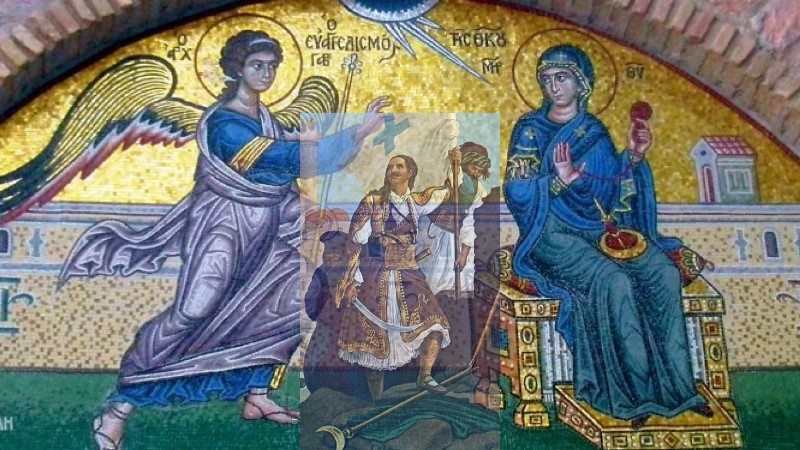 On Thursday, 12/25 March 2021, the Patriarchate held a Doxology at the Catholicon of the Church of the Holy Sepulchre for the 200th Anniversary of the 25 March 1821 Revolution.

The Doxology was offered as a thanksgiving to God for His strengthening of our Nation’s struggle to be liberated from the four hundred years of slavery to the Ottoman Empire.

After the Doxology, there was a supplication for the repose of the souls of those who fought and gave their lives in this sacred fight, Chieftains, Generals, simple soldiers and national martyrs.

The Doxology was led by H.H.B. our Father and Patriarch of Jerusalem Theophilos with the co-celebration of Hagiotaphite Archbishops, Hieromonks and Hierodeacons, and the co-prayer of Monks and laity, members of the Church and the Greek Community, along with the Consul General of Greece in Jerusalem Mr Evangelos Vlioras and members of the Consulate.

After the Doxology, at the Great Reception Hall of the Patriarchate, His Beatitude addressed those present as follows:

“You must guard your faith and consolidate it because when we took the arms, we said first in favour of faith and then in favour of the Homeland!” (From the speech of the Elder of Morias Theodoros Kolokotronis in Pnika, 13 November 1988).

Today’s Anniversary of March 25 is of particular importance, because this year 2021, marks two hundred years since the pinnacle of modern Greek history, that is, the beginning of the Greek Revolution of 1821.

The Revolution of 1821 is undoubtedly a bright milestone not only for the Greek but also for world history. And this, because as Theodoros Kolokortonis says, “When we decided to start the Revolution, we did not think about how many we were, nor that we do not have arms … but the desire for our freedom fell on all of us like the rain, and our clergy and the leaders … we all agreed on this goal and made the Revolution”.

The “desire of freedom”, namely the reason for the existence of freedom which is imprinted in the hearts and minds of the Greeks, is no other than the reason for the existence of freedom in Christ. “Stand fast therefore in the liberty wherewith Christ hath made us free, and be not entangled again with the yoke of bondage” (Gal. 5:1), Saint Paul preaches. This freedom in Christ was impossible to be kept under the power of darkness (Col. 1:13), the barbaric conquest and tyranny of the Ottomans.

We say this because the shaking off of the Ottoman yoke of slavery was not a simple act of heroism and self-sacrifice, but rather an act of imitation of the martyrs of the love of Christ. “Thou hast caused men to ride over our heads; we went through fire and through water: but thou broughtest us out into a wealthy place” (Psalm 66:12).

The revolt of the fighters of Romiosyni was an act of primary motivation, that is, of class and commonwealth. This is also confirmed by the slogan of the national uprising phrased by the Elder of Morias, Theodoros Kolokotronis: “now our fight is for the holy faith of Christ and the freedom of the homeland”, as well as by the great contribution of the Church with both its upper and lower rank clergy. Hegoumens and simple Monks of many Monasteries became prototypes of a holocaust. They sacrificed themselves watering the tree of freedom with their sacred blood. “Freedom and Romiosyni are twin brothers”, the established poet Ioannis Ritsos says.

The Revolution of 1821 demonstrated the idiosyncrasy of the Greeks, which has been forged by the moral and spiritual values ​​of the Greek-Christian frame of mind; a frame of mind that had endured insults and humiliation due to slavery for four centuries, and finally led to the libating blare of Rigas Feraios “freedom or death”. As for the Church, which is the incarnation of the Greek-Christian frame of mind, it became “the centre and constituent of national life … not as a power over the people and organization, but as an inner force and power, enlivening the national body, uniting its members through the common faith and coordinating its actions” according to the speech of memorable Metropolitan Dionysios of Kozani, on the contribution of the Church during the 1821 Revolution.

The 200th Anniversary of the National Rebirth, celebrated this year, should not be considered merely as a remarkable genealogical of historical memory, but rather as an inexhaustible source of enlightening power that illuminates the soul and mind of all who want to come to the knowledge of the truth, or according to Paul, “all that will live godly in Christ Jesus” (2 Tim. 3:12).

Our Venerable Hagiotaphite Brotherhood and We, according to Saint Paul’s words: “as dying, and, behold, we live; as chastened, and not killed; As sorrowful, yet always rejoicing” (2 Cor. 6:9-10), “And that, knowing the time, that now it is high time to awake out of sleep” (Romans 13:11), went to the Church of the Holy Sepulchre were we rendered thanksgiving praise and Doxology, as we should, to the Holy Trinitarian God, on the commemoration of the Rebirth of our Noble Nation of the Rum Orthodox. We also prayed for the eternal repose in the land of the living of the souls of those who fought and gloriously fell for the country, in the sacred fights of the noble nation of the Rum Orthodox and suffered a martyr’s death.

For these, let us raise Our glass in a toast and rightfully exclaim:

Long live the noble and Royal nation of the Rum Orthodox!

Today marks the 200th anniversary of the leading historical moment in the long course of our Nation, the proclamation of the Revolution of ’21, which had as its happy occasion the founding of the modern Greek State and the rebirth of democracy in its cradle.

In every historical period, there is a pole, a historical event that marks it, and becomes a point of reference for all of us later. March 25, 1821, is this milestone in the history of Hellenism, the Balkans, Europe, because the Greeks made the heroic decision to rise up, alone against many, against the Ottoman tyranny and to claim Freedom with their blood.

It is, therefore, a special honour for the Consul General of the Motherland to address the Venerable Hagiotaphite Brotherhood and the Hellenism of the Holy Land, on the occasion of the two hundredth anniversary of the Revolution of 1821, a struggle for altars and hearths, a reference point and symbol for the Greek Nation.

It was spring even two centuries ago when Hellenism took up the sacred arms to claim its freedom. This unsurpassed grandeur of the Greeks’ ideal adored as a whole, the ordinary fighters and the Sailors, the Holy Clergy, the merchants and the scribes. “We all have this homeland together, both the wise and the ignorant, the rich and the poor, the politicians and the military and the smallest people,” wrote the voice of our collective conscience, General Makrygiannis.

The vision and expectations of the pioneers of the Revolution, the known and unknown heroes who sacrificed their lives under conditions unimaginable to us today, inspired the enslaved Hellenism and all lovers of freedom around the world, creating the philhellenic movement which shocked Europe and America. It is worth mentioning the case of Haiti, which was the first country to officially recognize our Revolution, sending 100 volunteers and a shipment of 25 tons of coffee to Adamantios Korais to be sold in Paris and the profit to be used to buy weapons for the Revolution.

There are countless examples of heroism and sacrifice above duty during our National Uprising.

Let us consider indicatively the battle of the Hierolochites in the battle of Dragatsani, one of the most moving moments in Greek history, in February 1821, when the Hierolochites sacrificed themselves to one, always faithful to their oath. A valuable exhibit in the Historical Museum of Athens is the black uniform of a Hierolochitis of Dragatsani where the blood with which the fighter grafted the tree of our freedom has been imprinted.

So, we rightly repeat for them the lyrics of our great poet Andreas Kalvos:

The year 2021 revives our hopes for the decomposition of the current infectious disease. At the same time, for us Greeks everywhere, it is charged with an additional powerful historical symbolism.

The 200th anniversary of our National Rebirth invites us to reflect on the successes and challenges of our National life, and to arm ourselves with courage and perseverance to respond to modern challenges based on the legacy bequeathed to us by the struggle of heroic protagonists of our freedom.

Our National Anniversaries are not just an opportunity to celebrate the past, but they are key points that bring back to our minds the events that forged and shaped the collective historical memory of Greeks everywhere. The vision and values ​​that inspired our freedom fighters can only inspire and guide our action today. Values ​​that acquire an additional sense of timeliness for Hellenism, which is called today as then to defend its national dignity and survival.

For the Holy Land, the Patriarchate of Jerusalem, as an integral part of our Orthodox faith and Hellenism, has been and remains a point of reference, guardian of the moral and spiritual values ​​of Greek and Orthodox witness (martyria) in the Holy Land as a source of life and hope.

Today’s anniversary underscores the unwavering willingness of Greeks everywhere to uphold our freedom, independence and national pride, knowing full well that the price of freedom is always high and that our country is blessed because there are always those who will willingly pay for this price.

With these thoughts, I invite everyone to exclaim;