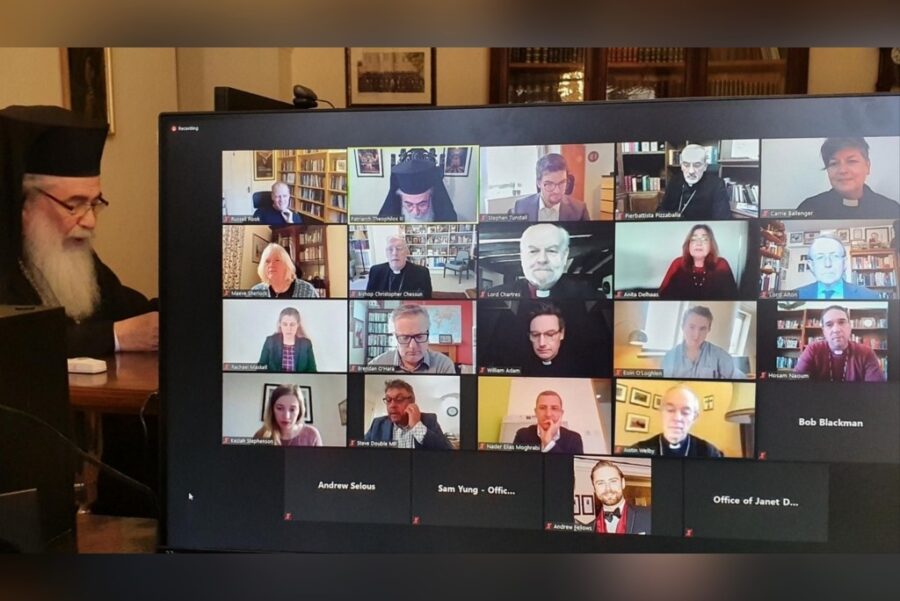 His Beatitude joining via Zoom the APPG hearing. Thursday, February 25.

His Beatitude Patriarch Theophilos III joined today, Thursday February 25, along with fellow Holy Land Church leaders, Members of the British Parliament and officers of the All-Party Parliamentary Group (APPG), within the initiative dedicated for Christianity in the Holy Land.

The meeting held via Zoom was convened by the Chair of the APPG Steve Double MP, and was joined by 27 people including His Grace the Archbishop of Canterbury, Justin Welby. From Jerusalem, the meeting was attended by His Beatitude the Latin Patriarch of Jerusalem, Pierbattista Pizzaballa, His Grace Archbishop-elect, Hosam Naoum of the Episcopal Diocese of Jerusalem, and Reverend Carrie Ballenger, the Pastor of the Lutheran Church of the Redeemer in Jerusalem.

“Firstly, we would like to thank His Grace, Archbishop Justin, for welcoming us today. Your wise leadership of the worldwide Anglican Communion is an example to us all, and we are truly grateful for your committed support of the churches here in the Holy Land. It is a privilege for us to demonstrate the unity of the Church of Jesus Christ and represent the Christians of the Holy Land together in this Parliament,” His Beatitude Patriarch Theophilos said as he opened the hearing session.

“With steadfastness, we as the Christian community of the Holy Land, are working together ever so closely and presenting the much-needed unified voice. Your support is invaluable and has already helped us to resolve a number of challenging issues. With your help, we hope to forge a brighter future for people of all faiths in our beloved Holy Land.”

The Holy Land Heads of Churches each took the opportunity to explain how the pandemic has affected the social and financial situation for their respective communities and institutions. They also welcomed the APPG members to visit the Holy Land for a closer and more realistic experience, after the pandemic ends, where they also invited the MPs to encourage their communities to visit the Holy Land as “pilgrims not only as tourists”.

The All-Party Parliamentary Group or ‘APPG’ is composed of Members of Parliament in the United Kingdom from all political parties who explore and discuss issues and concerns on various relevant topics. This hearing was part of an APPG that was formed with the interest in “Christianity in the Holy Land”. The initiative intends to shed some light to the international community of the different plights and challenges facing local Christians, ways to help maintain that Christian characteristic in the Holy Land and find common ground to empower and strengthen them.