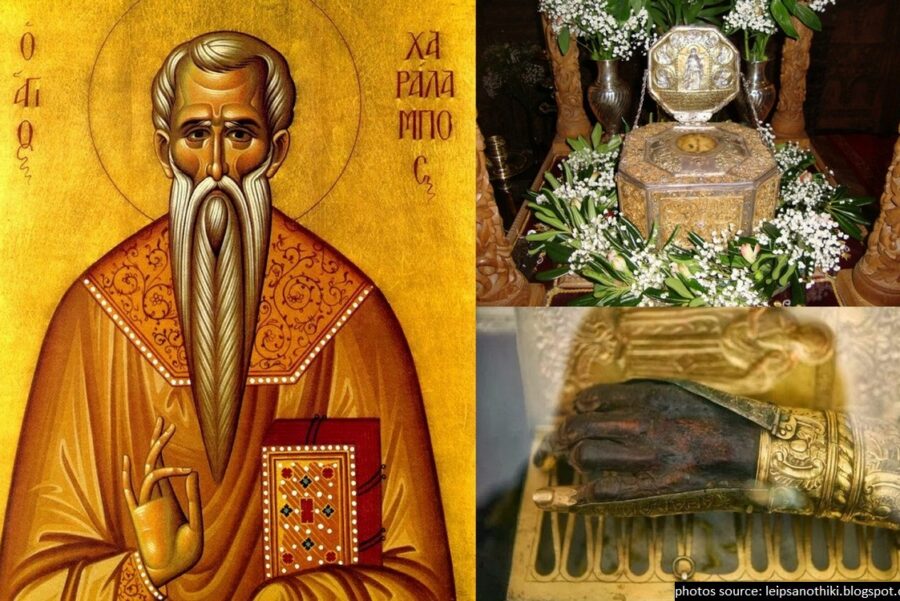 He was an Orthodox priest who earned his sainthood solely by his steadfastness to the Christian faith in the face of prolonged agonies. No single martyr was recorded to have endured as much physical punishment as Charalambos.

Charalambos lived in the town of Magnesia in Asia Minor during the second century. He was ordained a priest at an early age to serve his hometown, in a province fiercely hostile to Christians. His reputation as a preacher and man of God placed him as the leader of the tiny Christian body that grew steadily under his influence in spite of great odds. A man of the people, Charalambos brought the light of the Lord’s love to everyone in his community. He also brought down upon himself the envy and wrath of those in power.

The provincial governor, Lukianos, had little regard for the welfare of his people; for the Christians he had nothing but utter contempt. A confrontation between the governor and Charalambos was inevitable, as was the result of their meeting. After a brief exchange of formalities, the governor unequivocally declared that Charalambos must renounce Christ or be punished. This set the scene for a long period of human suffering in the name of the Saviour.

When he refused to worship the idols, his persecutors began a planned assault on his body, and Lukianos took the chance to unleash his merciless hatred for Christians. Charalambos was first lashed to a post in the public square to be held up to public scorn and ridicule. Then they slashed him repeatedly with sharp knives, taking care that no wound would be fatal. When Charalambos refused to denounce the Lord, they cut him down and dragged him through the streets by his beard. He endured the extremely painful grating of his skin by the pebbled surface as well as the merciless kicking of sandaled feet. Finally propping him up on his feet, they demanded that he renounce Jesus; once again he refused.

After a systematic series of cruelties that spanned several months, the derision of the pagans turned to wonder at the power and the faith of this Christian. When their methods of punishment only served to draw converts to Christianity, Charalambos’ enemies sought to put him quickly to death.

The local people, however, rose in opposition to his planned death. Charalambos had helped many afflicted people who were brought to him. The matter was brought up before Emperor Servius, who ordered the battered priest to be brought to Antioch, Syria. Once there, Charalambos was led through the streets with a horse’s bit in his mouth. Then they nailed him to a cross. Not only did Charalambos refuse to relent, but he also refused to die. Then they ordered him to be beheaded. Just as his executioners were about to carry out the sentence, a voice said, “Well done, my faithful servant; enter into the Kingdom of Heaven.” At that moment he died without a blow being struck, thus denying the pagans their revenge. The two executioners were immediately converted. He died for Christ in A.D. 192.

After his death, St. Charalambos body was placed in a golden coffin and many of his relics are preserved in Greece, e.g. a large portion of his sacred skull is treasured by the Monastery of St. Stephen, Meteora, where it performs miracles to this day. Also, his wonderworking hand (photographed above) is treasured at the Monastery of the Mega Spileon (the Great Cave) in Kalavryta, Greece.

Our Patriarchate holds an annual feast on February 23 to honor Saint Charalambos at the monastery named after him, which is located in the Christian Quarter of the Old City of Jerusalem, north of the Holy Sepulchre.