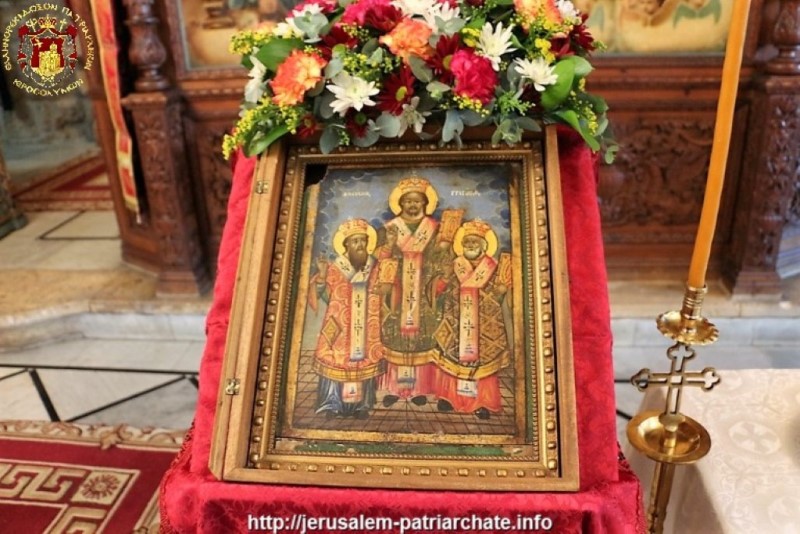 On Friday 30 January / 12 February 2021 the Patriarchate celebrated the Feast of the Three Hierarchs, Saint Basil the Great, Saint Gregory the Theologian and Saint John Chrysostom, at the Patriarchal School on the hill of Holy Zion.

The common Feast of these Three great Hierarchs was established by the Church in the 12th century, in order to solve the dispute among the members of the congregation regarding who among the three Saints is greater than the others and bring back the peace.

This arrangement was proposed by the Metropolitan Ioannis Mavropous of Euhaita, who composed a common canon for the Saints.

This Feast was celebrated at the Patriarchal School as the Three Hierarchs are also the patron Saints of education since they introduced the golden rule between the ancient classic education and Christian teaching.

For this Feast, the Divine Liturgy was officiated by the Chairman of the School Board, His Eminence Archbishop Isidoros of Hierapolis, with the co-celebration of the Managing Director of the School, Elder Dragoman Archimandrite Mattheos, the Presbyters Athanasios and Nektarios and the Secretary of the Holy and Sacred Synod and Manager of the Boarding School, Hierodeacon Simeon. The Service was attended by the Consul General of Greece in Jerusalem Mr Evangelos Vlioras, the School teachers and students.

The Sermon of the day was delivered by the Managing Director of the School Archimandrite Mattheos.

After the Divine Liturgy, the Managing Director of the School hosted a reception for the Episcopal Entourage and the congregation at the reception hall of the School.