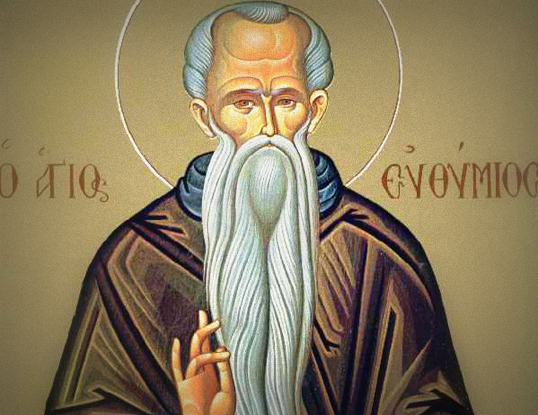 Born to pious parents after long years of childless marriage, his parents heard in a vision a voice saying “be of good cheer! God will grant you a son, who will bring joy to the church.” Thus, the child was named Euthymius (good cheer). And because of his ascetic life and firm confession of the Orthodox Faith, he’s called ‘the Great’.

Devoted to church since a young age, St. Euthymius was eventually entrusted with the supervision of all the city monasteries. During Great Lent, he would withdraw into the wilderness. Due to the fact that his responsibility for the monasteries weighed heavily upon the ascetic and conflicted with his desire for stillness, he secretly left the city and headed to Jerusalem.

The saint settled into a solitary cell in the Tharan lavra, near Saint Theoctistus (September 3) who also lived in asceticism. They shared the same zeal for God and for spiritual struggles, and each strove to attain what the other desired. They had such love for one another that they seemed to share one soul and one will.

People seeking spiritual benefit began to flock to the hermits and brought them food. Gradually, a monastic community grew up around them. Several monks came from the Tharan monastery, among them Marinus and Luke. Saint Euthymius entrusted the supervision of the growing monastery to his friend Theoctistus.

In these years Saint Euthymius converted and baptized many Arabs. Among them were the Saracen leaders Aspebet and his son Terebon, both of whom Saint Euthymius healed of sickness. Aspebet received the name Peter in Baptism and afterwards he was a bishop among the Arabs.

On the other hand, word of the miracles performed by Saint Euthymius spread quickly. Unable to bear human fame and glory, he secretly left the monastery, taking only his closest disciple Dometian with him to the Rouba desert and settled on Mt. Marda, near the Dead Sea.

In his quest for solitude, the saint explored the wilderness of Ziph and settled in the cave where David once hid from King Saul. Saint Euthymius founded a monastery beside David’s cave, and built a church. During this time Saint Euthymius converted many monks from the Manichean heresy, he also healed the sick and cast out devils.

Visitors disturbed the tranquillity of the wilderness. Since he loved silence, the saint decided to return to the monastery of Saint Theoctistus. Along the way they found a quiet level place on a hill, and he remained there. This would become the site of Saint Euthymius’ lavra, and a little cave served as his cell, and then as his grave.

The Greek Orthodox Patriarchate runs the monastery of St. Euthymius in the Old City of Jerusalem, which is two-minutes walk from the headquarters of the Patriarchate, next to the Monastery of our Lady of Sednaya.