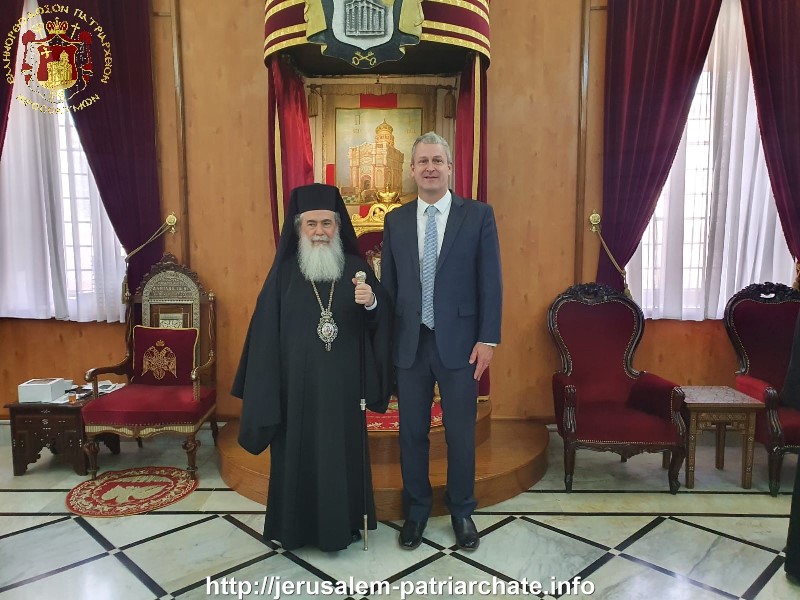 THE OFFICIAL OF THE US EMBASSY VISITS THE PATRIARCHATE

On Wednesday, 14/27 January 2021, the Chief of the Palestinian Affairs Unit of the U.S.A. Embassy (formerly the US Consulate of Jerusalem) Mr George Noll visited the Patriarchate, accompanied by two of his colleagues.

Mr George Noll was received by H.H.B. our Father and Patriarch of Jerusalem Theophilos and Hagiotaphite Fathers.

In this visit, His Beatitude was attentive to Mr George Noll’s interest and informed him how the Patriarchate has been coping with the pandemic year of Covid-19; that the Patriarchate guided its clergy and the faithful Christians to behave in co-operation with the Health Authorities of the State of Israel, where they live, as well as in Jordan, and the Palestinian State, places of the ecclesiastical jurisdiction of the Patriarchate, since the days of Saint James the Brother of God and First Hierarch of Jerusalem, who convened the first Local Synod in Jerusalem in AD 40, and since the days of the Pact treaty which was signed between Patriarch Sophronius and Caliph Umar Khattab (also known as Ashtiname, or as al-ʿUhda al-ʿUmariyya, in Arabic), in AD 638.

Moreover, His Beatitude informed Mr Noll that the Patriarchate keeps all shrines accessible and functional, operating thus in a pastoral and not in a political mission, according to the Gospel narrative “render unto Caesar the things that are Caesar’s, and unto God the things that are God’s”.

Mr George Noll thanked His Beatitude for this briefing and expressed his intention to co-operate with the Patriarchate from his position as the representative of The U.S.A., within the framework of the aforementioned ecclesiastical principles.

For this meeting, Mr George Noll offered His Beatitude a symbolic Christian present, while the latter offered in return a beautiful silver icon, depicting the Church of the Holy Sepulchre and the Temple of Solomon.