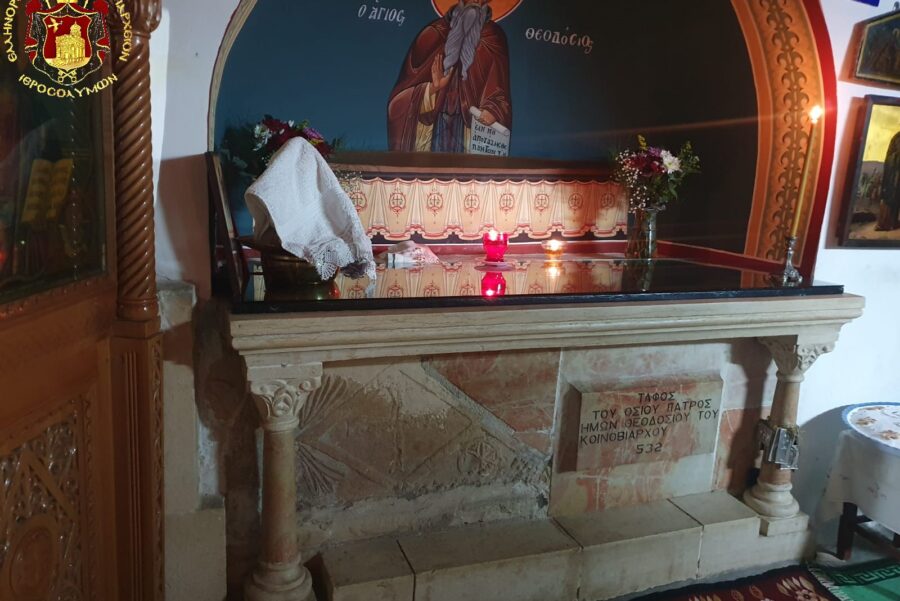 On Sunday, 11/24 January 2021, the Patriarchate celebrated the Feast of our Holy Father Theodosios the Cenobiarch.

Having initially striven in ascesis at the Holy Monastery of Ikelia, near Jerusalem, he retreated to the desert of Judea and founded the Holy Monastery that bears his name to the present day, as a Coenobion. He received there the beginner monks, who were trained in obedience, common life and the work of handcrafts, and they provided for the poor and the needy. After this training, the monks would receive the blessing to enter a stricter form of ascesis at the monastic Lavra, such as that of Saint Savvas. Saint Theodosios became a Hegoumen / Exarch of the Coenobitic life in Palestine, while Saint Savvas had the same position for the life in the Lavra. Both Saints, Theodosios and Savvas, were from the same country, contemporaries, and co-operated in the fight against Monophysitism, and the establishment of the Doctrine of the 4th Ecumenical Synod in Chalcedon in AD 451, regarding the indivisible coexistence of the two natures of Christ, the divine and the human, in one hypostasis.

This Monastery is located at the place where the Wise Men from Persia stayed overnight on their return via a different route to their country. The Monastery has proven to be stronger than the destructions from various conquerors and the wear of time. It was renovated by the Cretan Monks Galaktion and Leontios in the beginning of the 20th century, later on in the same century by the blessed Archbishop Bartholomew of Madaba, and recently by the Elder Hegoumen Archimandrite Ierotheos, who built a new extension at the Monastery, completed the frescoes in the Church and protected the property of the Patriarchate in the surrounding to the Monastery area.

Due to covid-19 restrictions, an All-night Vigil was officiated at the Monastery by H.H.B. our Father and Patriarch of Jerusalem Theophilos, with the co-celebration of their Eminences, Archbishops; Aristarhos of Constantina and Theodosios of Sebastia, Elder Dragoman Archimandrite Mattheos, Priest Yusef and Priest George from Beit Jala, Archdeacon Mark and Hierodeacon Simeon. The chanting was delivered by His Eminence Archbishop Aristovoulos of Madaba, the spiritual father of the Monastery of Saint Savvas, Archimandrite Eudokimos and the Monks of the Monastery.

“Lord, who shall abide in thy tabernacle? who shall dwell in thy holy hill? He that walketh uprightly, and worketh righteousness, and speaketh the truth in his heart. He that backbiteth not with his tongue, nor doeth evil to his neighbour, nor taketh up a reproach against his neighbour” (Ps. 15:1-3) the psalmist proclaims.

Today, at the time of Epiphany, when Christ appeared to us in the river Jordan and illumined the world, the feast of our Holy and God-bearing Father Theodosios has also shone; therefore, both the clergy and the people have gathered in the place of his ascesis to glorify in Doxology our Holy Trinitarian God and honour the Saint.

Our Holy Father Theodosios, who cultivated the arid land of this desert of Judea, became worthy of dwelling in both the earthly and the heavenly dwelling places of the Lord, keeping all of God’s commandments, as Saint Basil the Great says: “One should not only do what is right, but also work inspired by a righteous disposition, according to: ‘That which is altogether just shalt thou follow’ (Deutoronomy 16:20)”.  In other words, Saint Theodosios combined in himself all the virtues that distinguish the righteous and holy man of God.

This is also expressed clearly in the hymns that Saint Theophanes wrote for him: “O righteous Father Theodosios, thou God-bearing Saint, with fervour thou didst struggle in this brief temporal life in hymnody and vigils and constant fasting. To thy disciples thou becamest a rule; the grace of the All-holy Spirit found thy stainless soul, in thee as brilliant and immaculate light, by whose mighty power, thou wast adorned in splendour to glorify Christ unceasingly, a single Son in two natures, both God and man, who at the hand of the Forerunner John was baptized, receiving witness from the voice of God the Father” (Minaion Vespers Sticheron 1).

And Cyril of Scythopolis, Saint Theodosios’ biographer calls him “blessed and citizen of heaven, the great glory of Palestine and the desert, the boast of the monastic schema, the stronghold of the true doctrines, the colonel and fighter, and the guide of the coenobitic rule”.

When our Holy Father Theodosios came to the Holy Land, he encountered the great Fathers of the time, Euthymios the Great, Savvas the Sanctified and the Holy Abbas Markianos who lived in a Coenobion in Bethlehem, and who had said to him: “A city that is set on a hill cannot be hidden” (Matt. 5:14). In you too, everything that is hidden will God make visible and denoted”. There was also a reverend Elder named Loginos of Cappadocia, who belonged in the Order of the Studious ones, of the Holy Sepulchre, who encouraged him to go to the Monastery of Ikelia by the Seat of Theotokos, where he served as a Steward after her death.

Our Holy Father Theodosios excelled so much in the ascesis of the true Orthodox faith, that his hymnographer says: “Though by nature a man, O Father, thou wast seen to be a fellow citizen of the Angels. For, while living like a fleshless being upon the earth, O wise Theodosios, thou didst cast away all the care for the flesh; therefore, thou hearest from us: Rejoice, for from thy youth thou didst follow after Christ; Rejoice, for thou didst wither the pleasures of the flesh” (Minaion Matins, Oikos).

Indeed, the citizen of the desert Theodosios did cast away the cares of the flesh and withered its pleasures, hearkening to Saint Paul’s voice: “For to be carnally minded is death, but to be spiritually minded is life and peace. Because the carnal mind is enmity against God: for it is not subject to the law of God, neither indeed can be. So then they that are in the flesh cannot please God” (Romans 8:6-8).

Indeed, our Father Theodosios, who followed Christ from his early youth, has become a fellow citizen of the Angels. And this is because “as many as are led by the Spirit of God, they are the sons of God” (Romans 8:14), Saint Paul preaches. Interpreting these words, Saint Chrysostom says: “He didn’t say: ‘as many as receive God’s Spirit’; but ‘as many as are led by the Spirit’, showing that in this manner does [the Spirit] want to be the Master of our lives, just like the captain of the ship or the charioteer of the pair of horses”. And Saint Paul says: “Now the Lord is that Spirit: and where the Spirit of the Lord is, there is liberty” (2 Cor. 3:17).

In other words, the crown of the victory of the Spirit over the Law, or rather, over the thinking of the flesh, is the liberty in Christ, as Saint Paul says: “For the law of the Spirit of life in Christ Jesus hath made me free from the law of sin and death” (Romans 8:2). And this liberty in Christ is accomplished through the free will of man, on the one hand, in combination with the working of the Divine grace on the other.

Behold, therefore, why the hymnographer says: “forcing thyself on in martyric zeal with the blood of thy volition, and thou wast shown to be an unbloody Martyr of true religion” (Minaion Ode 9, Troparion 1). The Holy Church of Jerusalem boasts, because not only did it establish Martyrs of blood for Christ, but also unbloody Martyrs for the mystery of reverence, namely, of the keeping of God’s commandments. “Martyrs are not only those who received death for their faith in Christ but also those who died for the keeping of His commandments,” Evagrios says.

This bloodless martyr of the love for Christ’s commandments, the ladder of virtues and the beauty of the ascetics of the desert of Palestine, Theodosios the God-bearer, let us entreat, along with the Most Blessed Theotokos and Ever-Virgin Mary, to pray to our Lord Jesus Christ, who was baptized in the River Jordan by Saint John, to grant our souls His great mercy and peace in our region and in the whole world. Amen. Many happy returns, free from the coronavirus plague.”

After the Vigil, the Hegoumen Archimandrite Ierotheos, who is suffering from poor health, offered a modest reception to His Beatitude, through his helpers.

THE BLESSED PROFESSOR OF THE THEOLOGICAL SCHOOL OF THE NATIONAL KAPODISTRIAN UNIVERSITY OF ATHENS, GEORGIOS GALITIS HAS SLEPT IN THE LORD