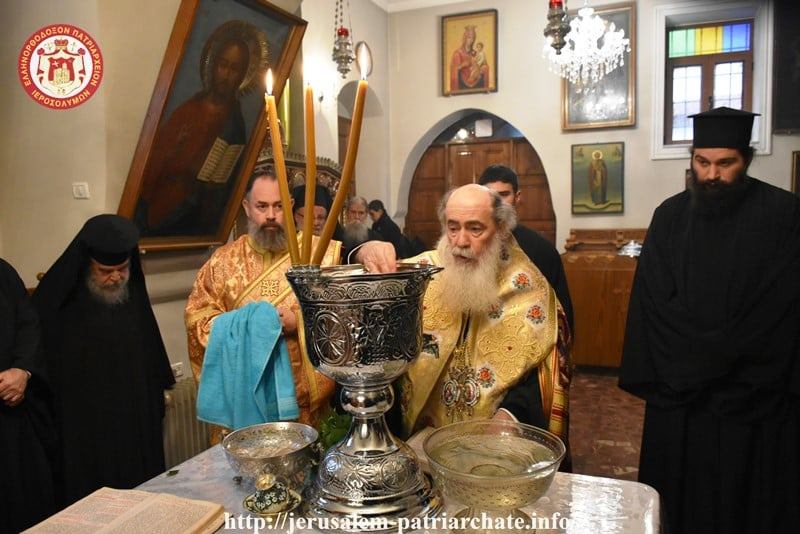 On Monday, 5/18 January the Patriarchate celebrated the Forefeast of Epiphany, the commemoration of the baptism of our Lord Jesus Christ by Saint John in the River Jordan.

Matins began early in the morning at the Monastic Church of Saints Constantine and Helen. At the end of Matins, the Royal Hours of Epiphany were read, at the presence of H.H.B. our Father and Patriarch of Jerusalem Theophilos. Then, Vespers and the Divine Liturgy of Saint Basil followed, at the chanting of the Byzantine choir leader of the Church, Archimandrite Eusevios.

A short while later, His Beatitude and His entourage went to the Holy Monastery of Saint John the Baptist by the river Jordan, though not via Jericho, due to covid-19 restrictions. After the welcoming and the reading of the 9th Royal Hour at the Monastery, the procession towards the river began, with only 50 people present, some clergy and a few faithful, and the Consul General of Greece in Jerusalem Mr Evangelos Vlioras. At the river, they held the Vespers of Theophany and the service of the sanctification of the water on the platform above the river.

Afterwards, His Beatitude went down to the river bank and He threw the holy cross in the water, under the chanting of the “when Thou wast baptized in the Jordan”.

Finally, there was a fasting reception at the Holy Monastery of Saint John the Baptist, hosted by the Hegoumen Archimandrite Bartholomew.