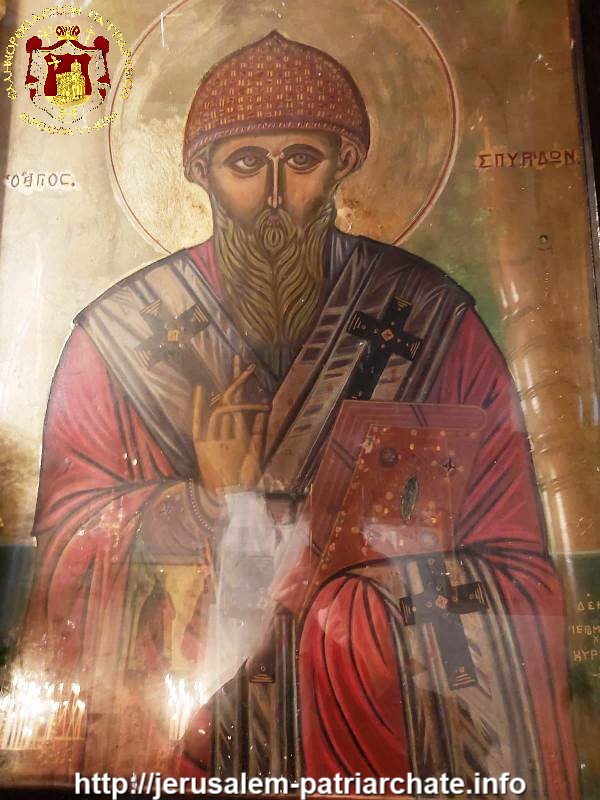 THE FEAST OF SAINT SPYRIDON AT THE PATRIARCHATE

On Thursday, December 12/25, 2020, the Patriarchate celebrated the feast of our Father among the Saints Spyridon the wonderworker, Bishop of Trimythus of Cyprus.

On this feast, the Church commemorates Saint Spyridon, who was a shepherd from Cyprus, a married man and a father of a daughter. After his wife’s death, he was called to become a shepherd of logical sheep. He was offered the Episcopal Office of the city Trimythus of Cyprus. In this prestigious position, he was also proven to be great in virtue. He was extremely charitable and a philanthropist. He was deemed worthy of the gifts of clairvoyance and of working miracles. Through his prayer, he stopped the draught and brought rain to the land again, and when the rain became a flood, he prayed and stopped it. He spoke to his dead daughter and received her answer regarding a woman’s will; he turned a snake into gold to save a poor man and afterwards he turned the gold back into the snake; he destroyed the sheds of those who stored wheat in times of famine, changed the route of river waters and had angels co-celebrating the Divine Liturgy with him.

Saint Spyridon participated in the 1st Ecumenical Synod in A.D. 325 and strongly supported the Doctrine of the One Essence of the Son with the Father. His sacred relics are kept incorrupt in Corfu.

His commemoration at the Patriarchate of Jerusalem was celebrated at the Holy Monastery dedicated to him, which is located near Damascus Gate inside the Wall of the Old City of Jerusalem.

Vespers in the afternoon and the Divine Liturgy in the morning of the Feast were officiated by His Eminence Archbishop Theophanes of Gerassa, with the co-celebration of Hagiotaphite Hieromonks, among who was Archimandrite Makarios, Arab-speaking Priests, Fr Nectarios and Fr Hader, and Archdeacon Mark. The chanting was delivered by the Byzantine choir leader of the Monastic Church of Saints Constantine and Helen, Archimandrite Eusevios and Nuns of the Patriarchate, as the services were attended by members of the Greek Consulate in Jerusalem and Orthodox Greeks, Palestinians, Russians, and Romanians.

Before the Holy Communion, the officiating Archbishop delivered a Sermon on Saint Spyridon.

His Beatitude and Hagiotaphite Fathers visited the Monastery for veneration during the Divine Liturgy.

The Patriarchal and Episcopal entourages were offered a reception by the Hegoumen Archimandrite Sergios.