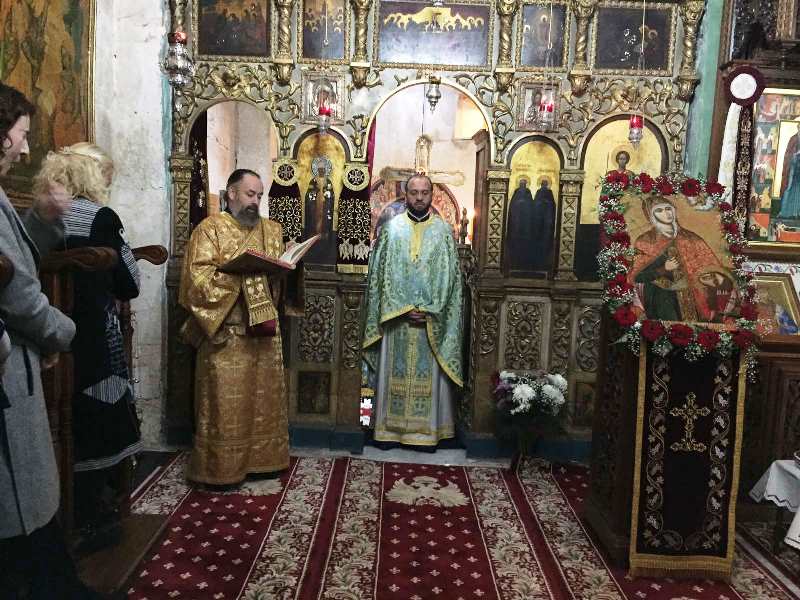 On Thursday, December 4/17, 2020, the Patriarchate celebrated the feasts of the Holy Great Martyr Barbara and of Saint John Damascene.

On the commemoration of the Holy Great Martyr Barbara, the Church recalls that the Saint lived in Nicomedia during the reign of Maximian, where she was tortured and beheaded by her own father Dioscorus for her faith in Christ in A.D. 290.

The Church of Jerusalem held Saint Barbara’s commemoration at her chapel in the Church of Saint Nickolaos near the Patriarchate.

Vespers and the Divine Liturgy were held by the Vice Representative of the Patriarchate of Romania in Jerusalem, Archimandrite John, with the Caretaker of the Monastery, Archdeacon Mark.

On the commemoration of our Father among the Saints Damascene, the Church recalls that he is a great Church Father from Syria, who came to Saint Savvas’ Lavra and lived in strict ascesis and every virtue. Saint John wrote mostly speeches defending the Holy Icons and the Doctrines of the Orthodox Faith, as well as the Octoechos. With his writings the Saint established theological doctrines and he therefore rightly deserves the titles of melodist and hymnographer of the Church.

At the chapel dedicated to him where his tomb also lies, in Saint Savvas’Monastery, Vespers in the afternoon and the All-night Vigil were held by the Archbishop in turn this year, His Eminence Aristovoulos of Madaba, with co-celebrants Hieromonks and Deacon Athanasios from the Basilica of the Nativity. The chanting was delivered by the Fathers of the Monastery as the Services were attended by Arab-speaking faithful from Bethlehem, Beit Jala and Beit Sahour.

At noon of the feast day, a monastic meal was offered by the Spiritual Father of the Monastery Archimandrite Eudokimos.