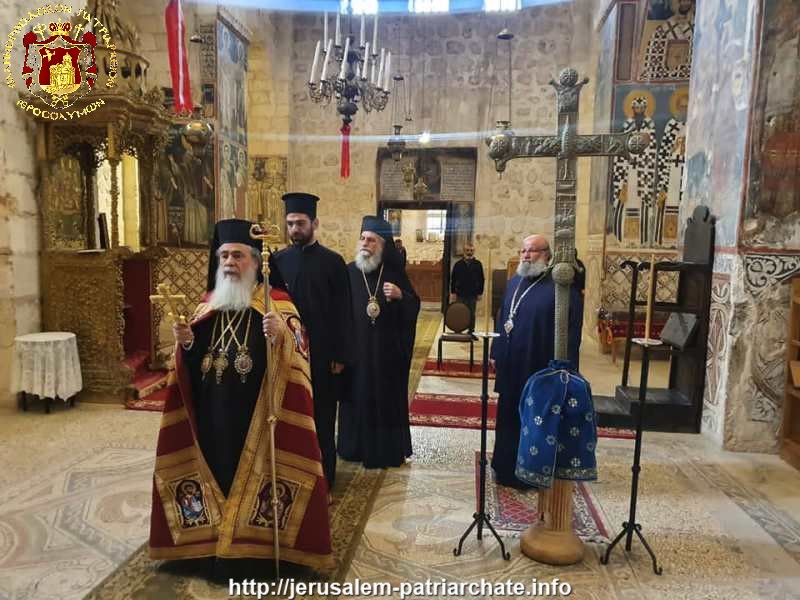 On Sunday, November 30/ December 13, 2020, the Patriarchate celebrated the feast of the commemoration of the Holy and Glorious Apostle Andrew the First-called, at the Holy Monastery of the Cross in West Jerusalem, where according to the tradition, Lot planted the three-composed wood (from pine, cedar and cypress) which became the Cross that our Lord Jesus Christ was crucified upon.

In this historic Monastery, which hosted the Higher Education Theological School from 1845 to 1909, and Byzantine and Georgian Frescoes are still preserved in its Church, the Divine Liturgy for the feast was officiated by H.H.B. our Father and Patriarch of Jerusalem Theophilos. Saint Andrew was born in Bethsaida of Galilee, and was Peter’s brother. He was called “First-called” because he was the first Apostle to follow the Lord when he heard Saint John the Baptist saying “behold the lamb of God”.   Co-celebrants to His Beatitude were their Eminences, Metropolitan Isychios of Kapitolias and Archbishop Philoumenos of Pella, Elder Kamarasis Archimandrite Nectarios, and Hierodeacon Eulogios. The chanting was delivered by His Eminence Metropolitan Joachim of Helenoupolis, as the service was attended by the Consul General of Greece in Jerusalem Mr Evangelos Vlioras and a few faithful Christians.

“Again the next day after John stood, and two of his disciples; And looking upon Jesus as he walked, he saith, Behold the Lamb of God! And the two disciples heard him speak, and they followed Jesus… One of the two which heard John speak, and followed him, was Andrew, Simon Peter’s brother” (John 1: 35-37, 40).

The power of the Sacred and Life-giving Cross of Christ our Saviour, has gathered us all in this Holy Shrine of the Monastery of the Cross, in order to celebrate the commemoration of the preacher of our faith, and the servant of the Divine Word, the Holy Apostle Andrew who was called ‘the first-called’.

The Holy Apostle Andrew, along with his brother Simon Peter were disciples of Saint John the Baptist, as Saint John the Theologian writes in his Gospel (John 1:35-37). When John the Baptist recognized Jesus after His baptism in the River Jordan, he pointed at Jesus to the two disciples that were with him, Andrew and John the Evangelist, and said: “Behold the Lamb of God!” (John 1:36), and they followed Jesus. “One of the two which heard John speak, and followed him, was Andrew, Simon Peter’s brother. He first findeth his own brother Simon, and saith unto him, we have found the Messias, which is, being interpreted, the Christ” (John 1:40-41).

The result of this event was that after the arrest of Saint John the Baptist by Herod, Peter and Andrew were called by the Lord, while they were by the sea of Galilee “casting a net into the sea: for they were fishers. And he saith unto them, Follow me, and I will make you fishers of men. And they straightway left their nets, and followed him” (Matt. 4:18-20).

Interpreting the impulsive behaviour and the willingness of Andrew the first-called, and of his brother Peter, Saint John Chrysostom says: “Pay attention to their faith and obedience. For while they were in the middle of their work when He called them they neither postponed following Him, nor did they say in hesitation, ‘let us go back and talk to our relatives’, but leaving everything at once, they followed him.”

Of course, this faith in the “Lamb of God” was imprinted in Saint Andrew’s heart by the great preacher of the desert, and teacher of repentance, Saint John the Baptist, as his hymnographer says: “Thou who wast formed by the light of the Forerunner: when the hypostatic and divine Effulgence of the Father’s Glory appeared on earth, as having counselled with His compassion to save the race of men, then, O Andrew, thou was first to hasten unto Him, being illumined in heart and mind with the most perfect and gleaming splendour of His Divinity; wherefore, O glorious one, thou art become an Apostle and preacher of Christ our God. Do thou, therefore, entreat Him to enlighten and to save our souls” (Minaion, Vespers, sticheron 1).

Moreover, the transformation of the Apostles’ minds through John the Baptist’s Light, upon their meeting with the Lord, is expressed in Saint Peter’s teaching with the words: “Seeing ye have purified your souls in obeying the truth through the Spirit unto unfeigned love of the brethren, see that ye love one another with a pure heart fervently: Being born again, not of corruptible seed, but of incorruptible, by the word of God, which liveth and abideth forever. For all flesh is as grass and all the glory of man as the flower of grass. The grass withereth, and the flower thereof falleth away: But the word of the Lord endureth forever. And this is the word which by the gospel is preached unto you” (1 Peter 1:22-25).

In other words, my dear brethren, “the word which by the gospel is preached unto us” by Saint Andrew the first-called and Saint Peter, Christ’s friend, is the living word of God, namely the incorrupt life in Christ of those who love Christ, as witnessed by the incorrupt relics and the sacred head of our Holy and Glorious Apostle Andrew, that have been preserved since his martyr’s death.

This Holy Apostle, who was the first called, sealed the Gospel that was preached in many countries and places of the world, through his martyr’s blood, imitating the Passion of Christ until death, as his hymnographer states: “As the first-called of all the disciples’ choir, and the servant of the eye-witness of the Word, O Andrew, we honour thee with laudations, as is thy due; for with love and unwavering longing and strong desire, thou didst follow the Lamb that doth take the world’s sins away. And thou, O Apostle, didst partake of the Passion of Him that had willingly suffered death in the flesh for us. Wherefore we cry aloud to thee: Intercede with Christ our God that forgiveness of all their transgressions be granted to them that with longing keep thy holy memory” (Matins, Sessional hymns after Ode 3, Troparion 1).

Indeed, with sacred desire do we celebrate today the commemoration of the Holy Glorious Apostle Andrew, whose immense beauty of soul was foreseen by our Lord Jesus Christ and called him in the Apostolic office, revealing to Andrew that He is the Prophet and Messiah preached in the Law of Moses, the Saviour of the world, who was born by the Virgin in a cave in Bethlehem and was worshipped by the Wise Men.

We, my dear ones, are called by the all-lauded Holy Apostle Andrew today, during this Eucharist, this bloodless sacrifice, “to worship and bow down: let us kneel before the Lord our maker. For He is our God, and we are the people of His pasture, and the sheep of his hand” (Psalm 96:6-7). Let us also entreat “the Lord to direct our hearts into the love of God, and into the patient waiting for Christ” (2 Thess. 3:5). Many happy returns and Merry Christmas, without the covid plague! Amen.”

After the Divine Liturgy, the good caretaker of the Monastery, His Eminence Philoumenos of Pella offered a reception for all, and at noon, he hosted a meal for the Patriarchal Entourage and the Consul General of Greece in Jerusalem, Mr Evangelos Vlioras.