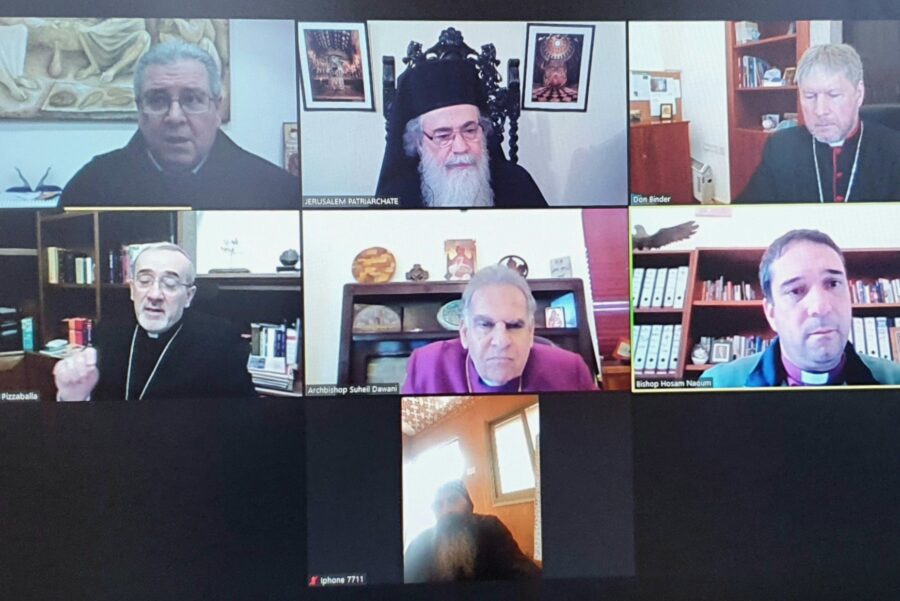 HIS BEATITUDE JOINS HEADS OF CHURCHES IN JERUSALEM FOR MONTHLY MEETING

His Beatitude Patriarch Theophilos III attended this morning, 9 December, the monthly meeting of Patriarchs and Heads of the Churches in Jerusalem via Zoom, to discuss various matters including the Christmas message for the year 2020.

Patriarch Theophilos was joined by His Beatitude Pierbattista Pizzaballa, the new Latin Patriarch in Jerusalem, His Paternity Francesco Patton, Custodian of the Holy Land, Their Grace Archbishop Suheil Dawani and Bishop Hosam Naoum from the Episcopal Church, and a representative from the Coptic Church.

His Beatitude started the meeting by congratulating the Latin Church in Jerusalem for their newly appointed Patriarch Pizzaballa, who has officially received the title last Friday, 4 December, after he had been the Apostolic Administrator of the Latin Patriarchate since 2016.

The Heads of the Churches went through the Christmas message for the upcoming holidays, and together they discussed and added some changes to the overall draft.

They also reviewed the latest updates from the World Council of Churches (WCC), which concern the organisation’s related offices in Jerusalem and the type of work and services they provide. This comes after almost two months from WCC’s last meeting with the Heads of the Churches last October, when they asked to receive support and combine efforts together with the Churches of the Holy Land to further facilitate their services.