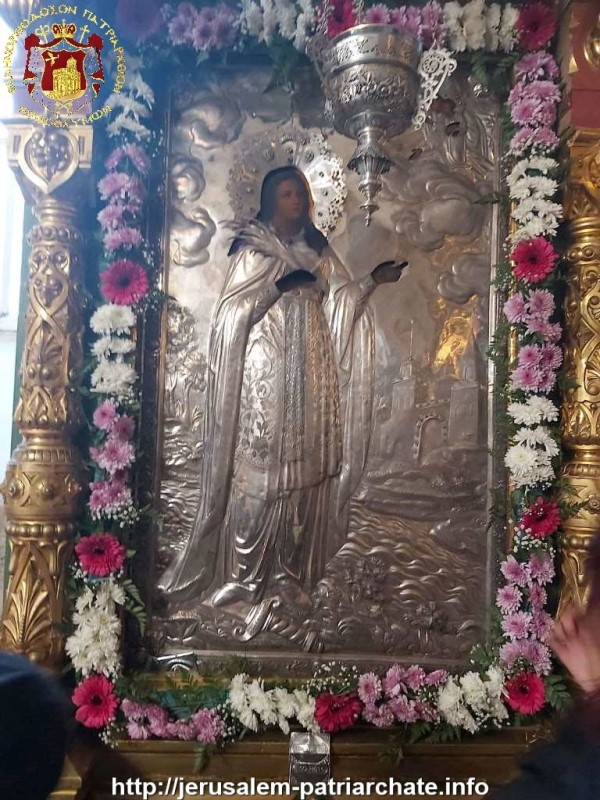 THE FEAST OF THE HOLY GREAT MARTYR CATHERINE AT THE PATRIARCHATE

On Tuesday, November 25/ December 8, 2020, the Patriarchate celebrated the Feast of the Holy Great Martyr Catherine the all-wise.

On this Feast, the Church commemorates Saint Catherine, who lived in Alexandria of Egypt in the 4th century. The Saint was well-educated and “silenced brilliantly the clever among the godless, by the sword of the Spirit”, therefore, she was tortured and suffered a martyr’s death during the reign of Maximinus in A.D. 305.

Her sacred relics are kept in the Holy Monastery of Sinai, where her commemoration is celebrated with great festivities and a delegation from the Patriarchate of Jerusalem, however this year no delegation was sent, due to the covid-19 pandemic.

Saint Catherine’s commemoration was celebrated at the Patriarchate in her Holy Monastery in the Old City of Jerusalem with Vespers in the afternoon and the Divine Liturgy in the morning, officiated by His Eminence Metropolitan Joachim of Helenoupolis, with co-celebrants; Elder Dragoman Archimandrite Mattheos and Archimandrite Paissios, Priest Farah Bandour and Priest Nectarios Chouri. The chanting was delivered by Hierodeacon Simeon, the Byzantine choir leader of the Church of Saints Constantine and Helen, Archimandrite Eusevios, and Mr Gotsopoulos, as the services were attended by Greek, Palestinian, and Russian faithful of the Jerusalem Community.

During the Divine Liturgy, His Beatitude and Hagiotaphite Fathers visited the Monastery for veneration.

The Patriarchal and Episcopal Entourage, along with the congregation, were offered a reception by the Hegoumen Archimandrite Stephen.