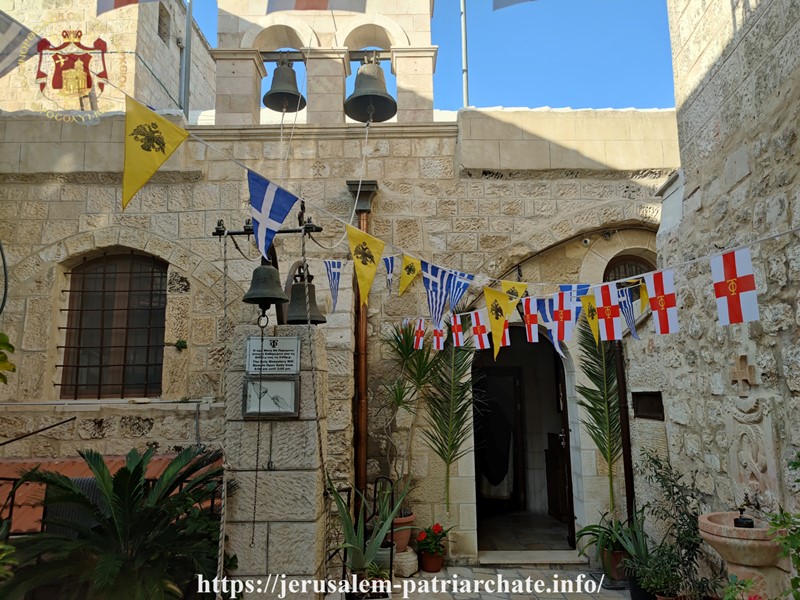 On Thursday, November 21/ December 4, 2020, the Patriarchate celebrated the feast of the Entry of the Most Holy Theotokos into the Temple. On this Feast of the Mother of God, the Church honours the Theotokos, commemorating that when She was three years old, Her parents offered Her to the Priests of the Temple of Solomon, according to their promise to God, where She remained at the Holy of Holies, being fed by an Angel and preparing to accept the great mystery of the incarnation of the Son and Word of God, our Lord Jesus Christ, through the Holy Spirit.

This feast was celebrated at the Patriarchate at the Monastic Church of Saints Constantine and Helen with the participation in prayer of the Patriarch and the presence of the Hagiotaphite Fathers.

It was also celebrated at the historic Monastery of Megali Panagia, which is adjacent to the Patriarchate.

Vespers in the afternoon and the Divine Liturgy in the morning were officiated by His Eminence Metropolitan Isychios of Kapitolias, with co-celebrants the Ministering Priest of the Monastery, Archimandrite Makarios, Archimandrites Ignatios and Isidoros and Arab-speaking Priests. The chanting was delivered by Mr Gotsopoulos and the Patriarchal School Students, as the services were attended by Nuns of the Monastery and Nuns from the other Monasteries of the Patriarchate, along with the Consul General of Greece in Jerusalem Mr Vlioras, and faithful Christians from Jerusalem.

During the Divine Liturgy, His Beatitude our Father and Patriarch of Jerusalem Theophilos visited the Monastery for veneration, accompanied by Hagiotaphite Fathers. The Patriarchal Entourage and the congregation were offered a reception at the Hegoumeneion by the good keeper of the preservation of the icons of the Monastery, Reverend Nun Melani.