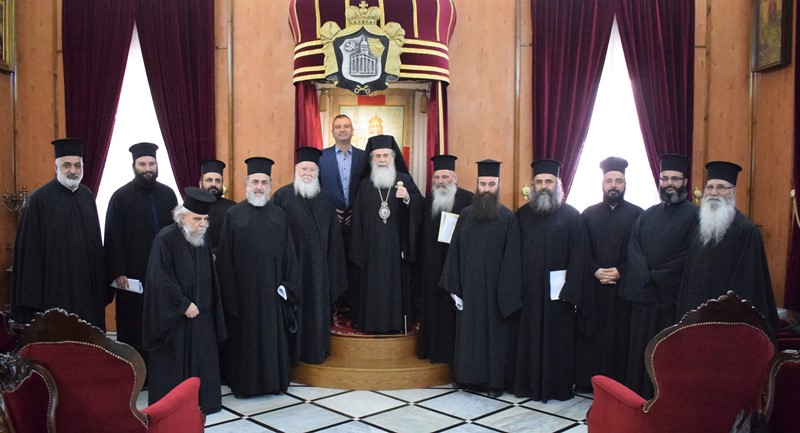 His Beatitude Patriarch Theophilos III led yesterday’s morning, October 9, a meeting of the heads, judges and representatives of the ecclesiastical courts of the Patriarchate of Jerusalem.

The meeting, which was held at the Patriarchate’s headquarters in Jerusalem, touched on several issues regarding the ecclesiastical courts of the Patriarchate that included: the fees for judicial procedures and to work together to unify them, the spatial and geographic authority of each court and how they’re determined and ways of transferring this authority from one court to another. Other issues discussed were the procedures needed for faith conversions and the necessity to unify them, as well as the mythology to have these registered by the relevant civil institutions.

In addition, the divorce topic was discussed; as those who wish to seek a divorce or an annulment of marriage must attend meetings with social workers or parish priests first, as the Church aims to raise awareness among couples and resolve domestic disputes without having to go through divorce or annulment of marriage. The meeting also examined to what extent do the ecclesiastical courts accept a divorce agreement that has been ratified by the civil courts.

The meeting also touched on the need to clarify the ways in which Israeli institutions deal with church court decisions. It was also decided that a website for the Orthodox Church Courts is set to be published.

The meeting concluded several decisions such as working on updating sessions for the church judges, holding periodic meetings for the judges of the Orthodox ecclesiastical courts to discuss the outstanding problems, and finally to form a mini-follow-up committee which consists of the heads of Orthodox ecclesiastical courts to discuss issues and problems facing the courts and to submit their recommendations to the General Assembly of court judges; where, if approved, they would be submitted to His Beatitude for final approval.

This meeting comes as part of a wider plan of His Beatitude Patriarch Theophilos III to upgrade the Orthodox ecclesiastical courts with the aim of ensuring that these courts maintain integrity and remain committed to a proper legal procedures for a well civil society.