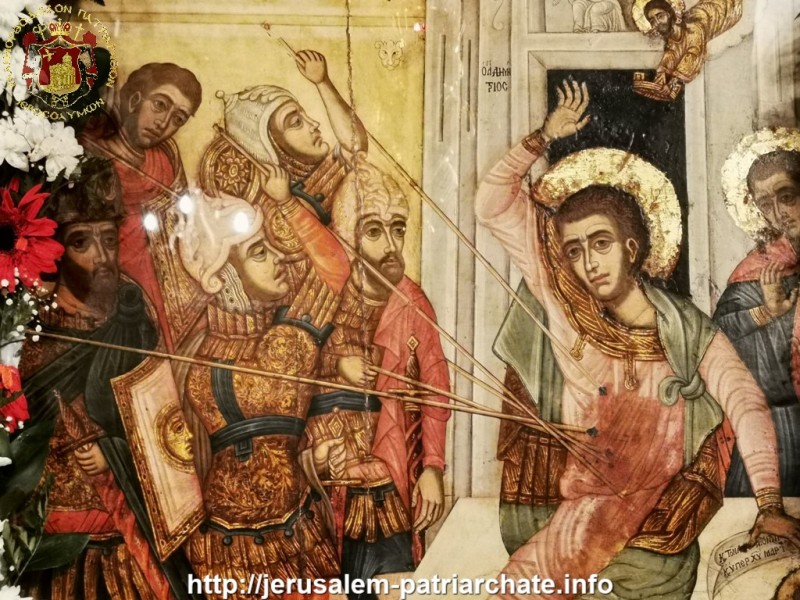 THE FEAST OF THE HOLY GREAT MARTYR DEMETRIUS AT THE PATRIARCHATE

On this feast the Church commemorates Saint Demetrius, who came from Thessalonica and suffered a martyr’s death in this city for the faith in Christ, during the reign of Maximian in A.D. 303, having first urged his disciple Nestor to enter into combat with Lyaeus in the stadium and defeat him; “Thou didst humble Lyaeus’ arrogance and gavest boldness to Nestor” (Apolytikion).

This feast was celebrated by the Patriarchate at the old chapel dedicated to the Saint, which is located between the School of Saint Demetrius and the Central Monastery, with Vespers in the afternoon, led by His Eminence Metropolitan Joachim of Helenoupolis. The Divine Liturgy in the morning of the feast was officiated by His Eminence Metropolitan Kyriakos of Nazareth, with co-celebrants the Archimandrites Makarios, Dionysios and Isidoros, Archdeacon Mark and Deacon Simeon, at the chanting of Mr Vasilios Gotsopoulos and the Patriarchal school students. The services were attended by the Monks and Nuns of Jerusalem.

During the Divine Liturgy, our Father and Patriarch of Jerusalem visited the chapel for veneration, accompanied by Hagiotaphite Fathers.

This feast was also celebrated at the Old City of Rafidia, near Jacob’s well, in Samaria, at the Church dedicated to the Saint, with the Divine Liturgy which was led by the Hegoumen of the Holy Church of the Annunciation in Rafidia, Archimandrite Leontios, with the participation of the Arab-speaking Community members.