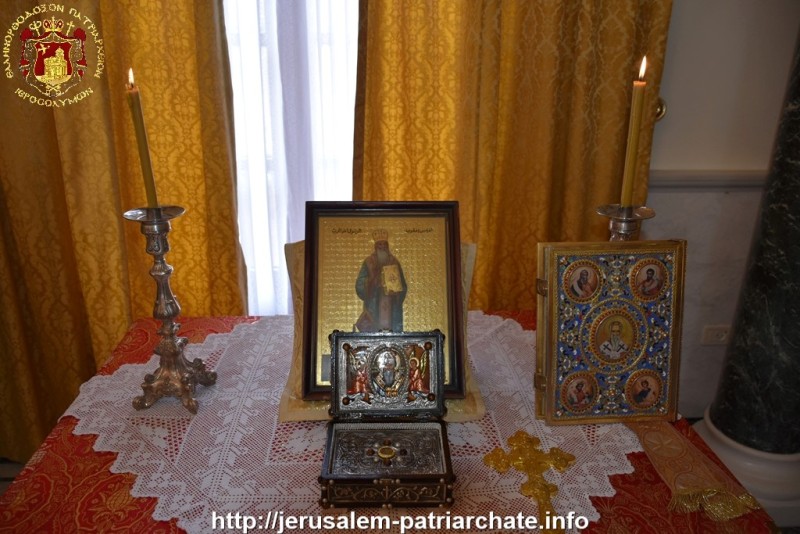 On Thursday, October 23 / November 5, 2020, the Patriarchate celebrated the commemoration of the Holy Apostle James the Brother of God.

On this Feast, the whole Church, and especially the Church of Jerusalem commemorates Saint James, son of Joseph the Betrothed, and brother of the Lord according to the law (according to Matthew 13:55; “His brothers were James and Joses and Simeon and Jude”). Saint James was ordained by the Lord as the First Bishop of the Church of Jerusalem, as his Troparion also states, “The Word of God, the Father’s Only-begotten, came down and dwelt here in our midst in these last days. He then appointed thee as the first shepherd of all-holy Jerusalem, and He made thee her teacher and a faithful steward of lofty spiritual mysteries. (Kontakion of the Saint, Menaion).

The Church also commemorates him as the writer of the Epistle bearing his name in the New Testament, and as the Chairman of the First Apostolic Synod in Jerusalem in A.D. 49, with a significant role in its outcome, which was that the gentiles were henceforth accepted in the Church without circumcision, with no need to keep the Law of Moses, but their abstinence “from pollutions of idols, and from fornication, and from things strangled, and from blood”(Acts 15:20).

According to Josephus’ witness, Saint James was thrown down from the pinnacle of the Temple of Solomon by the Jews, because he confessed that Jesus is the Christ.

Saint James’ commemoration was celebrated by the Patriarchate at his Holy Church which is located between the Hagiotaphite Brotherhood and the Church of the Holy Sepulchre, with Vespers in the afternoon at the presence of His Beatitude. The Divine Liturgy in the morning of the Feast was officiated by H.H.B. our Father and Patriarch of Jerusalem Theophilos, with co-celebrants their Eminences; Metropolitan Kyriakos of Nazareth, the Archbishops Aristarchos of Constantina and Secretary-General, and Theodosios of Sebastia, Metropolitan Joachim of Helenoupolis, as well as Hagiotaphite Hieromonks, the representative of the Russian MISSIA Archimandrite Dometianos, Archdeacon Mark, and the Cathedral ministering Priests, Fr. Farah/Charalambos Bandour and Fr. Hader/ George Baramki, and Priest Simeon from Nazareth.

The chanting was delivered by the Secretary of the Holy and Sacred Synod Hierodeacon Simeon and Mr Vasilios Gotsopoulos in Greek on the right and Mr Rimon Kamar in Arabic on the left. The Service was attended by the Consul General of Greece in Jerusalem Mr Evangelos Vlioras.

“Draw nigh to God, and he will draw nigh to you. Cleanse your hands, ye sinners; and purify your hearts, ye double minded… Humble yourselves in the sight of the Lord, and he shall lift you up” (James 4:8-10) Saint James the Brother of God preaches.

The grace of the Holy Spirit has gathered us all in this Cathedral of Saint James, in order to glorify in Eucharist, the festive commemoration of the First Hierarch on the throne of Jerusalem, the Holy preacher of the Church who is called Just and Brother of God.

According to Apostle Paul’s witness, Saint James was considered “the pillar of the Church” (Gal. 2:9), and also a “Master” of great status, as revealed by his Epistle: “My brethren, be not many masters, knowing that we shall receive the greater condemnation” (James 3:1).

“Draw nigh to God, and he will draw nigh to you” (James 4:8), James advises us, obviously following the Lord’s words: “look up, and lift up your heads; for your redemption draweth nigh” (Luke 21:28); Take courage, for your salvation and full redemption from the suffering of the current life, is close.

Indeed, my dear Brethren, we live in times that demand the urgent exercise of the good works and actions in Christ, as Saint Paul says: “And that, knowing the time, that now it is high time to awake out of sleep: for now is our salvation nearer than when we believed. The night is far spent, the day is at hand: let us, therefore, cast off the works of darkness, and let us put on the armour of light” (Romans 13:11-12).

Interpreting these words, Saint Chrysostom says: “cast off” means to renounce the phantasies, to set ourselves free from the dream-like state of the current life, cast off the deep state of sleep”. In other words, the works of sin are works of the darkness, because they come from the darkened state of ignorance and fallacy. And Zigavinos says: “Let us put on the works of light, those of the day, armouring ourselves with every virtue here on earth…, which will make us glad and luminous there”. In other words, Christ’s friends are soldiers among various and dangerous visible and invisible enemies. The Christians’ life is a life of struggle and fighting and for this reason, they should not be considered defenceless and naked, because they bear the armour of Christ’s light.

“Cleanse your hands, ye sinners; and purify your hearts, ye double minded” (James 4:9). According to the interpreters, the heart is the seat of the motives and the predispositions. For this reason, our hearts should become straightforward and sincere, free from every hypocrisy, having as their only concern to be pleasing to God.

Interpreting the words: “purify your hearts, ye double minded”, Ecumenius writes: “[The Apostle] calls “double-minded” those who do not live according to a specific manner, but are influenced and led astray by the deceit of the people. They do not follow one way living in the house of the Lord”. And Saint Theophylaktos says: “But they are always led and influenced by the violence of the people”.

“Humble yourselves in the sight of the Lord, and he shall lift you up” (James 4:10). Humble yourselves before God and He will lift you up in this present life through virtue and moral perfection, while in the future life, through His eternal glory and beatitude, Saint James teaches: “God resisteth the proud, but giveth grace unto the humble” (James 4:6). This was said by Solomon, according to Saint Chrysostom, not to state that God is in need of engaging into a battle with the proud person, but “in order to show the intensity of His revulsion toward the proud”.

Indeed, God detests the proud because, according to Saint John of the Ladder, “pride is God’s denial, the forerunner of insanity and God’s rival”. And he adds: “I heard a respectable man saying: ‘Suppose the passions of dishonesty are twelve. If one of them, pride, is the one you will love with all your heart, it will replenish the place of the remaining eleven”.

This teaching of Saint James applies not only to the Christians but to all those who love God, “Who will have all men to be saved and to come unto the knowledge of the truth” (1 Tim. 2:4), according to Saint Paul. Behold therefore why the hymnographer praises Saint James by saying: “The Word of God, the Father’s Only-begotten, came down and dwelt here in our midst in these last days. He then appointed thee as the first shepherd of all-holy Jerusalem, and He made thee her teacher and a faithful steward of lofty spiritual mysteries. For this cause, as is meet, O wondrous James, O blest Apostle, we all praise and honour thee” (Kontakion of the Saint, Menaion).

The Church of Jerusalem rejoices and is glad on this festive commemoration of James the Brother of God, it’s First Hierarch and Patron Saint, because, having received the Apostolic ordination by the Lord Himself, he became the founder of the synodical and institutional character in the Holy Spirit of the One Holy Catholic and Apostolic Church. And he sealed the apostolic ministry, which was appointed to him in “Jesus the author and finisher of our faith” (Hebrews 12:2), with the blood of his martyr’s death.

Being a true, faithful and living witness of this sacred consignment of Saint James the Brother of God, the Christian flock in the Holy Land stands firm, along with its spiritual and ecclesiastical Authority, the Hagiotaphite Brotherhood, which resolutely follows the advice of our Lord Jesus Christ: “Fear not, little flock; for it is your Father’s good pleasure to give you the kingdom” (Luke 12:32), and you “should not depart from Jerusalem”(Acts 1:4), as well as Saint James’ prompt: “Be patient, therefore, brethren… stablish your hearts: for the coming of the Lord draweth nigh” (James 5:7-8). And let us say along with the hymnographer: “Thou wast the Lord’s blessed brother when He came in the flesh, and His divine disciple and the faithful eyewitness of His divine mysteries; and fleeing with Him into Egypt, thou ever wast with Jesus’ Mother and Joseph. Therefore, with them intercede thou that our souls be saved”. Amen. Many happy returns, free from the coronavirus plague!”

The Divine Liturgy was followed by the return to the Patriarchate Reception Hall, and the distribution of the small loaves of bread by the responsible for the Bakery, Abbess Seraphima. At the Hall, His Beatitude addressed those present as follows:

“Thee the son of Joseph and first Hierarch of Jerusalem, James, seer of God and brother of the Lord, we praise and bless” the hymnographer of the Church proclaims.

Christ’s Church and especially the Church of Jerusalem rejoices today on the commemoration of the Holy glorious Apostle and Martyr James the Brother of God, the first to honour the Episcopal Throne, namely its Seat of the Liturgical and Divine Eucharistic gathering.

Saint James, who was also called James the Just, was ordained a Bishop by our Lord Jesus Christ Himself, thus becoming the first shepherd, Hierarch of Jerusalem, teacher and faithful servant of the spiritual sacraments. That is why he also received the Apostolic office.

Saint Ignatius of Antioch (A.D. 104), praising the institutional significance of the episcopal office for the Church, speaks about “a primate bishop in the place of God” and a point of unity. “Learn to do everything by the primate bishop who stands in the place of God…let there be nothing in you able to divide you; but be united in the bishop, obeying God through him in Christ” (to Magn. 6).

Moreover, David chants, “God sitteth upon the throne of his holiness” (Psalm 47:8). The Only-begotten Son and Word of God sits upon this holy throne in His Church, with the Holy Apostles sitting along with Him, who, together with the angelic forces unceasingly offer doxology to God, which is a prototype of the earthly doxology; that is why there is a specific order which composes everything in both the heavenly and the earthly Church.

James the Brother of God became a great minister of the ecclesiastical throne of the city of King Christ, and through his martyr’s blood, he sealed the apostolic succession throughout the ages for each one of the Primates of the Bishops and Patriarchs of the throne, at the place of the Crucifixion and the Resurrection of Christ, Who is the Head of the body of the Church (Col. 1:18).

Our Venerable Hagiotaphite Brotherhood, following Saint Paul’s advice: “keep that which is committed to thy trust” (1 Tim. 6:20), went down to Saint James Cathedral, where we celebrated the Patriarchal Liturgy, for the glory of the Holy Trinitarian God and in honour of our Father among the Saints James the Brother of God, with the participation in prayer of the pious Christians and pilgrims in Jerusalem.

Let us then say along with the psalmist: “His seed shall endure forever, and his throne as the sun before me. It shall be established forever as the moon, and as a faithful witness in heaven” (Psalm 89: 36-37).

Saint James, Brother of God, the pillar of the Church, intercede to Christ our God for the salvation of our souls, for the peace of our region and preserve this Patriarchal throne of Jerusalem unto the ages. Amen. Many happy returns!”

Concluding the reception, His Beatitude returned the keys of Saint James Cathedral to its Caretakers, according to the tradition.