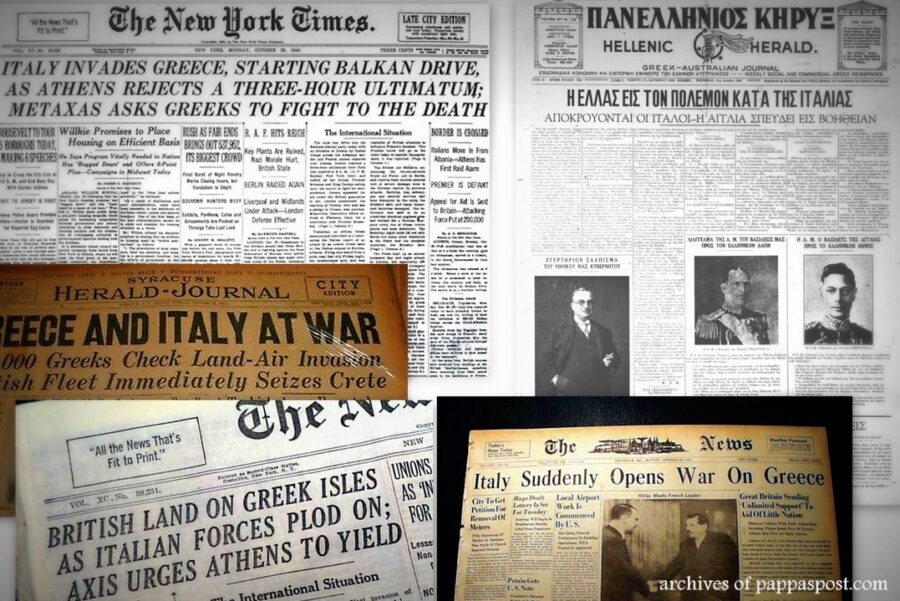 Different newspapers around the world marking the beginning of Axis war against Greece. Photo source by pappaspost.com

“Well, this means war” was the iconic moment when former military general and Prime Minister of Greece Ioannis Metaxas refused to give in for an ultimatum made by Italian Prime Minister Benito Mussolini, an ally of Nazi leader Adolf Hitler, to allow Italian forces to occupy strategic locations in Greece during World War II.

Although having taken a stance against the Italian demands meant that the country would soon enter war, the Greeks stood by their leader’s decision and soon the Greek press introduced ‘Oxi’ to the world.

The word ‘Oxi’ (pronounced Ohi, meaning No) was first presented as a title in the main article of the newspaper ‘Greek Future’ of N. P. Efstratios on October 30, 1940. Soon afterwards locals all over the city of Athens marched through the streets yelling “OXI”!

Today, Greeks worldwide celebrate the spirit of bravery represented by Oxi Day each 28th of October. They commemorate the sacrifices of their army, whom unbeknownst to the Axis forces turned out to be a formidable force, holding the Axis back from entering Greece for almost six months.

Despite the fact that Greece eventually fell under the Axis’ occupation, the rare light of hope given by the Greeks that time made people all over the world admire their bravery during key battles especially the Battle of Crete, which inspired the rest of the world. That was the first time a country stood up to the Axis powers with any amount of success. Greece gave the rest of the world hope that the Axis could, in fact, be defeated.

U.S. President at that time, Franklin D. Roosevelt famously said, “when the entire world had lost all hope, the Greek people dared to question the invincibility of the German monster raising against it the proud spirit of freedom.”

Similarly, former Prime Minister of the United Kingdom, Sir Winston Churchill praised the spirit of the Greek fighters by saying “hence we will not say that Greeks fight like heroes, but that heroes fight like Greeks.”

Our Jerusalem Patriarchate commemorated yesterday, 28 October the Greek national day of ‘Oxi’ through a special ceremony at the Church of the Holy Sepulchre in Jerusalem.

“Undeniably, the heroic resistance against Hitler’s armed forces was the victory of the spirit over material things, of freedom over slavery, of right against the unrighteousness of the modern civilization, of the barbarity, and finally, of Christ’s light over the darkness of the devil,” His Beatitude Patriarch Theophilos III said during his celebratory speech at the main hall of the Patriarchate.

Special celebration is normally held during the evening of Oxi Day at the Patriarchal seminary school of Zion, where the students act different plays and recite poems commemorating the day. This year, as a precautionary procedure following the government’s rules of social distancing, the celebrations had to be cancelled for the safety of the students and everyone attending.