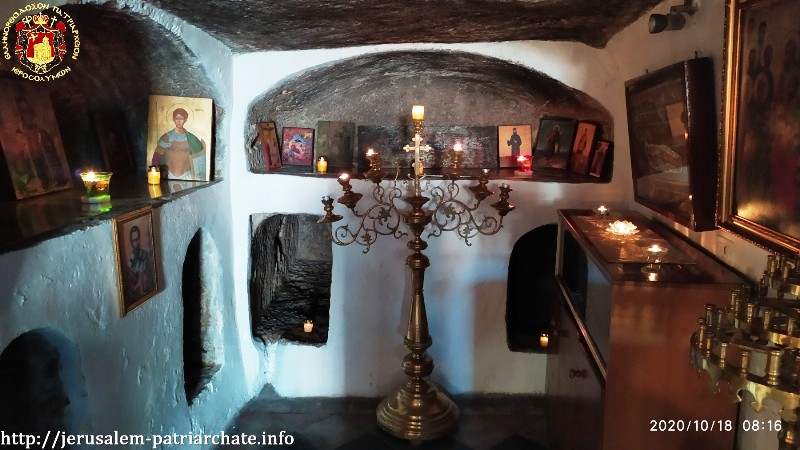 H.H.B. THE PATRIARCH OF JERUSALEM CELEBRATES THE DIVINE LITURGY AT THE H. MONASTERY OF SAINT ONUPHRIUS

On Sunday, October 5/18, 2020, His Beatitude our Father and Patriarch of Jerusalem Theophilos officiated the Divine Liturgy at the Holy Monastery of Saint Onuphrius, which is located opposite Siloam’s pool, where the man who was born blind was sent by the Lord to wash his eyes and recover his vision. It is built on the rocky area with the carved rocks at the Potter’s Field, which the Pharisees bought in order to bury the foreigners, with the thirty pieces of silver that Judas returned to them having regretted his betrayal.

The Patriarchate owns a Monastery there, dedicated to our Righteous Father Onuphrius the Egyptian.

Co-celebrants to His Beatitude were, His Eminence Archbishop Aristarchos of Constantina, and the Archimandrites: Elder Dragoman Mattheos, Kallistos, the Hegoumen of the H. Monastery of Saint Charalambos, along with Hierodeacon Eulogios. The chanting was delivered by Mr Vasilios Gotsopoulos and the Patriarchal School Students.

Before the Holy Communion His Beatitude delivered the following Sermon to the few Nuns and faithful who attended the service due to the COVID-19 restrictive measures:

“But love ye your enemies, and do good, and lend, hoping for nothing again; and your reward shall be great, and ye shall be the children of the Highest: for he is kind unto the unthankful and to the evil” (Luke 6:35), the Lord says.

The grace of the All-holy Spirit which was sent to the Holy Martyr Charitini has gathered us all in the Holy place, in order to celebrate the Great Sacrament of the Holy Eucharist on her commemoration.

The special characteristic of the Saints, and of course of the Martyrs of the Church is the Divine love, namely the love for Christ, which [love] made us sons and daughters of the Most-High.

“God is love, and he that dwelleth in love dwelleth in God, and God in him” (1 John 4:16). “We know that we have passed from death unto life because we love the brethren. He that loveth not his brother abideth in death. Whosoever hateth his brother is a murderer: and ye know that no murderer hath eternal life abiding in him” (1 John 3:14-15) Saint John the Evangelist preaches.

Interpreting Saint John’s words, Saint Basil the Great says: “if God is love, it is absolutely necessary for hatred to belong to the devil. For as the one who has love has also God, likewise, the one who has hatred, feeds the devil in him”.

The infinite philanthropy of God, namely the infinite power of His love, was revealed in the mystery of the Divine Providence, with the Incarnation of the Son and Word of God, our Lord Jesus Christ. And Christ’s sacrifice on the Cross for our sins is “the love of Christ, which passeth knowledge” (Eph. 3:19).  Christ, Who, “made himself of no reputation, and took upon him the form of a servant, and was made in the likeness of men: And being found in fashion as a man, he humbled himself, and became obedient unto death, even the death of the cross” Saint Paul preaches (Phil. 2:7-8).

In other words, God the Word was made human and suffered death on the Cross, in order to make powerless the one who had the power and the might of death, namely the devil, “that through death he might destroy him that had the power of death, that is, the devil” (Hebrews 2:14), Saint Paul says. The devil is the enemy of every righteousness (Acts 13:10), and therefore the Father of resentment and the primary enemy of God’s love. According to Saint John of the Ladder, resentment means among other things: hatred of righteousness, the poison of the soul, alienation of love, and a thorn pierced in the soul.

Behold therefore why the Lord commands: “But I say unto you which hear; love your enemies, do good to them which hate you” (Luke 6:27). Paying heed to the Lord’s words, Saint Paul composed the hymn of love, which he placed above all knowledge and every degree of faith. “And though I have the gift of prophecy, and understand all mysteries, and all knowledge; and though I have all faith so that I could remove mountains, and have not charity, I am nothing” (1 Cor. 13:2).

Saint Paul, who was “caught up to the third heaven” (2 Cor. 12:2), praises the steadfast bond between love and truth by saying: “Charity rejoiceth not in iniquity, but rejoiceth in the truth” (1 Cor. 13:6).

And to make it clearer, love does not rejoice in something unrighteous but rejoices when the truth prevails. In this case, “truth” is Christ, the Son and Word of God, Who proclaimed “I am the truth” (John 14:6). According to Saint John the Evangelist’s testimony, “God is love; and he that dwelleth in love dwelleth in God, and God in him” (1 John 4:16).

The love that was revealed in the mystery of the Divine Providence is, in itself, the mystery of God the Father. For this reason, love for others, and especially for our enemies, is not a virtue, but “the result of nature” as the interpreter Zigavinos says: “It is not a virtue for someone with love to love, but a result of nature”. And according to Saint Anthony the Great, “life and death are from our neighbour”, meaning that we will have life or death, depending on the way we behave towards our neighbour, our fellow man.

Christ’s love made today’s honoured Saint Charitini, an adornment of the Martyrs, as the melodist of the Church says: “Loving the gladness of the things of the spirit and spurning all things seen, since they are inconstant, O maid, thou didst secure thy mind with godly hopes. Hence, thou rannest froth with joy, to the contest, O Martyr, fighting in the stadium, where thou slew the serpent; and thou didst plait a most majestic crown, O Charitini, adornment of martyred Saints” (Matins, Sessional hymn tone four).

As for us, my dear Brethren, let us entreat the God of Love to make us steadfast in His Love, paying heed to Saint Paul’s advice: “Be ye, therefore, followers of God, as dear children; and walk in love, as Christ also hath loved us, and hath given himself for us an offering and a sacrifice to God for a sweet-smelling savour”(Eph. 5:1-2). Amen. Many happy returns”.

After the Divine Liturgy, the good keeper and renovator of the Monastery Reverend Abbess Paissia offered a hospitable reception.